What Dreams Are Made Of 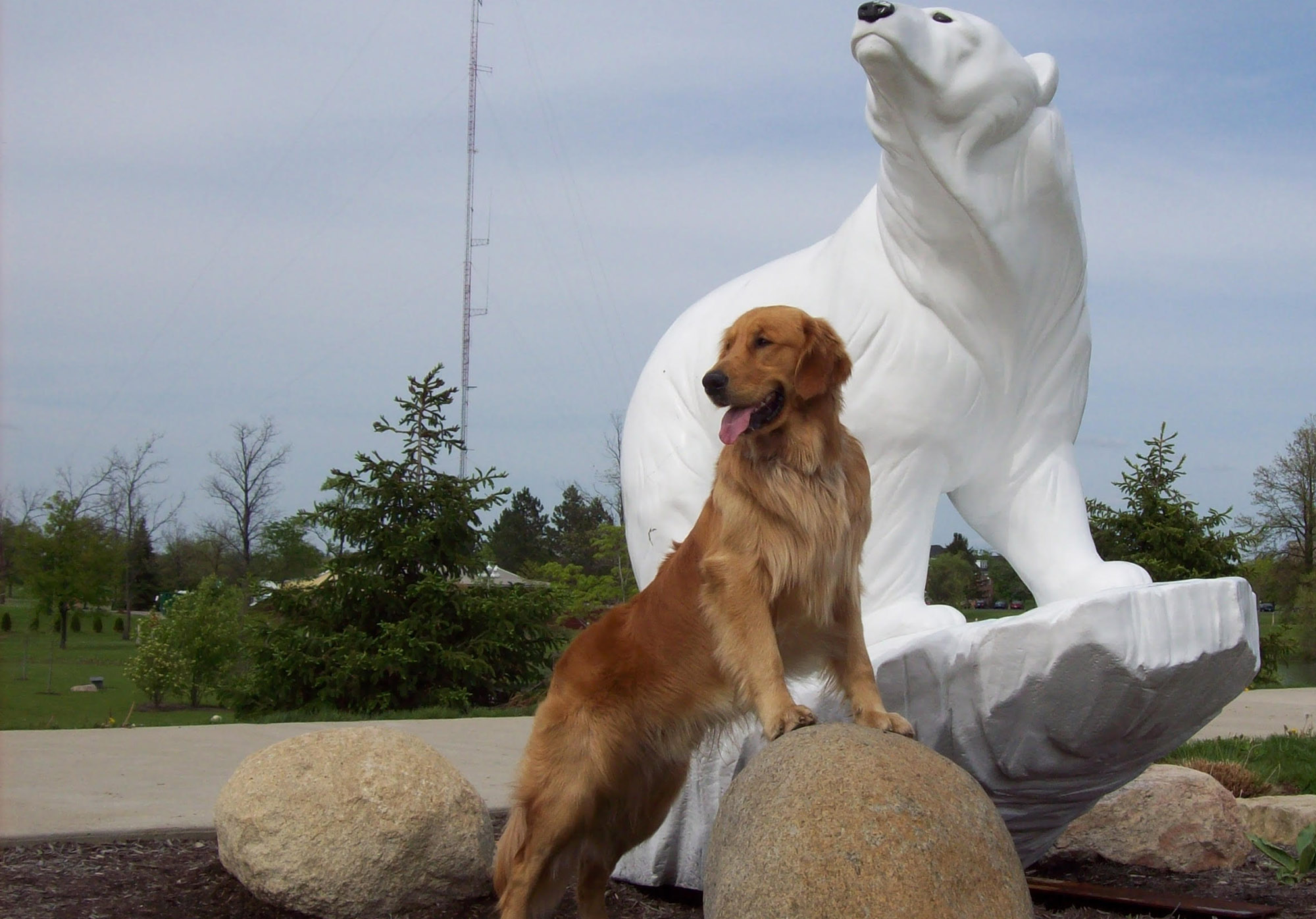 Back in 2007, J.J. Coate-Walters, BS ’08, became the trainer of a golden retriever puppy named Zeeke, the first-ever service dog in training to live on Ohio Northern University’s campus. As a senior biology and pre-veterinary medicine major, Coate-Walters trained Zeeke for her senior Honors Program project, and he was such a fixture on campus that the University awarded him an honorary degree – a Bachelor of Science in canine companionship.

Now a practicing veterinarian and owner of Sunnyside Veterinary Clinic in London, Ohio, Coate-Walters reflects on her time with Zeeke and how it changed her life forever (scroll to the bottom to check out a photo gallery too):

When I first received the puppy, he was a furry ball of yellow fluff – in my opinion, the very substance that dreams are made of. The paperwork that came along with him had a bunch of legalese since he was a service dog in training, but I just couldn’t find his name anywhere on the paper. Finally, I found it…Zeeman? Really? That isn’t a word let alone a name! I mean woof, right? So right then and there I decided the poor chap couldn’t head to a college campus with that kind of moniker.

A dog had never lived on campus, and this project was the first of its kind. I knew well that not everyone is a dog person, so we didn’t want to step on toes, or pee on them either. And Zeeman, that just wouldn’t do. But the rules said we had to stay with a Z. Zeus, Zane…Zeeke. Zeeke was a confident name. Zeeke was slick but not arrogant. A name you could say with “NO!” and a name you could purr when rubbing a belly. Yes, “Zeeke” fit just right. Zeeke was officially christened!

As a condition of my senior capstone project, Zeeke was granted permission to attend classes, participate in lunchtime at the Mac, and cheer on the Polar Bears during sporting events. The goal of these “special privileges” was to ensure that Zeeke received proper socialization so that in the future, he would be well suited to accompany his special-needs human wherever they wanted to go, including the grocery store, the mall or the workplace.

I was lucky that during my senior year, my professors were very gracious and embraced Zeeke’s classroom attendance happily. He made it pretty easy, though, as he was quite good about snoozing contentedly while I crammed my brain full of biology notes. Only once did he bark during a dream and woke everyone out of their lecture slumber! It was hard to be upset with him since he had been sleeping and my professor kindly took the disruption in stride. The more insidious issue was the occasional release of toxic dog flatulence. That disturbance was not as easily ignored. I swear I could see a devilish smirk on his face when the stink cloud hit our noses!

Zeeke was very good at knowing the difference between work time and play time. He wore a head harness and a yellow jacket to signify that he was on the job. But during break times on the Tundra, he rolled with enthusiasm when I removed his coat, and he greeted the squirrels joyfully. In our down time, Zeeke and I explored every inch of the beautiful Ohio Northern campus. It was so soothing to lazily stroll around the campus grounds and the Green Monster. Zeeke loved to walk, no matter the season or weather. I consider myself extremely blessed that I experienced the Green Monster late at night after a deep snow. Cutting the first tracks in the drifts, with only the twinkling starlight as our company, my friend and I witnessed ONU beauty together.

As one of the Klondike mascots, I enjoyed celebrating the Polar Bears during game day. On these days, Zeeke would have a puppysitter who would watch him while I was occupied. Usually pretty upbeat and jolly, Zeeke’s demeanor would change noticeably as I put on the suit.   He glared in the pictures we took of him and Klondike, and when we were at the game, he would ostentatiously ignore me, but scowl at me from afar. He would look directly into the screen, right at my eyes (how did he see my eyes?!), and clearly state, “You look utterly ridiculous, and you are embarrassing yourself and me.” When the suit came off, Zeeke returned to his friendly state once more. He was perhaps the one ONU student who had complete disdain for the mascot!

Since Zeeke was a “Big Dog on Campus” and he knew waaaaay more people than I did (seriously most people said hi to Zeeke on the Tundra and had no idea who I was), I decided to have a 1-year birthday party for him. We booked a room at the Mac, and I got down to the business of inviting Zeeke’s two-legged and four-legged buddies. We had a blowout with decorations, food, balloons, the works. I even went to the trouble of fixing a doggie birthday cake made with peanut butter and oatmeal and jerky. His friends were so kind and lavished him with cards, treats and toys. The dogs ran and played, and it was a lovely party. As the excitement died down and we started to clean up the decorations, Zeeke laid sprawled out on the floor, all four paws up in the air, tired out from the celebration.

Caring for Zeeke was an 18-month journey, starting with the pup, shaping the teenager and graduating the young adult. Zeeke will always be my first child. Furry, sure. But there was conception in the form of the proposal I drafted and pitched to the then-president of ONU, Dr. Ken Baker. There was the expectation waiting for my beautiful puppy to be delivered via stork mail, or rather, the airlines from the breeding facility in California. Then, the late-night potty training, carrying him up and down the three flights of stairs in my apartment complex. Then introducing him to the world, taking him to school, arranging for baby/puppy-sitting while I was away and planning his birthday party. Then graduation. Ohio Northern arranged to present him with a diploma on my graduation day, presenting him with a bachelor’s in canine companionship. And then giving him away to his new family, like letting your baby leave your nest when they get married. Like a child, he will always have a piece of my heart no matter where he is or what he is doing. He taught me to be a mom, and he taught me to love in a maternal way. He wasn’t just a dog, he was a chapter of my life, and the profound effect he had on me helped shape me into the woman I am today.

There is no doubt about it: The day I said goodbye to my friend was absolutely the hardest day of my life. I was so proud of him for graduating and starting his new life as an assistance dog (the graduation rate is only 50 percent). By all measures, this was a huge success. But on that day, I saw Zeeke for the last time in my life. For the last 18 months, my life had revolved around him. I lived alone, and I was 100 percent responsible for him: cleaning him, feeding him, nurturing him and teaching him. And all of this was done in the public eye since he was a service dog and my senior capstone project. I had graduated college, been accepted into veterinary school, and found my human life partner. Zeeke had been there with me helping me during this difficult transition, helping me leave the little girl behind and grow into a woman. But the pain of walking away from him seared me like fire burning the fabric of my soul. In that moment, unspoken words passed between us. He watched me with understanding eyes as the distance between us grew larger. The room was crowded with people and dogs, but he and I stayed locked on each other until the door finally closed. My legs moved mechanically, and I felt empty, as if all of my soul had evaporated.

It is said that eyes are the window to the soul. As Zeeke and I looked into each other’s eyes for that last time, he told me that he would miss me too. He reassured me that it was all right, and each of us must go in different directions. That day, Zeeke began his noble duty of serving as man’s best friend. He was dedicating his life to helping people as an assistance animal. And that same day, I started my lifelong journey to help animals by heading into veterinary school. I thought of Zeeke when reciting my oath to promote the well-being of all animals. Although our paths diverged, I believe that day was the launching point for us both to go forward and make tremendous contributions for the benefit of both people and dogs. Even apart, I feel that we are partners bridging the gap between people and dogs and working to make the world a better place for both species.

Since Zeeke, ONU has become a breeding ground for service dog training, having graduated more than 50 service dogs through Polar Paws, a campus affiliate of the nonprofit organization 4 Paws for Ability. (Read more about the genesis of Polar Paws and the ONU family behind it.)

J.J. and Zeeke spent 18 months together and made so many memories on campus. Check out some of their special moments together. 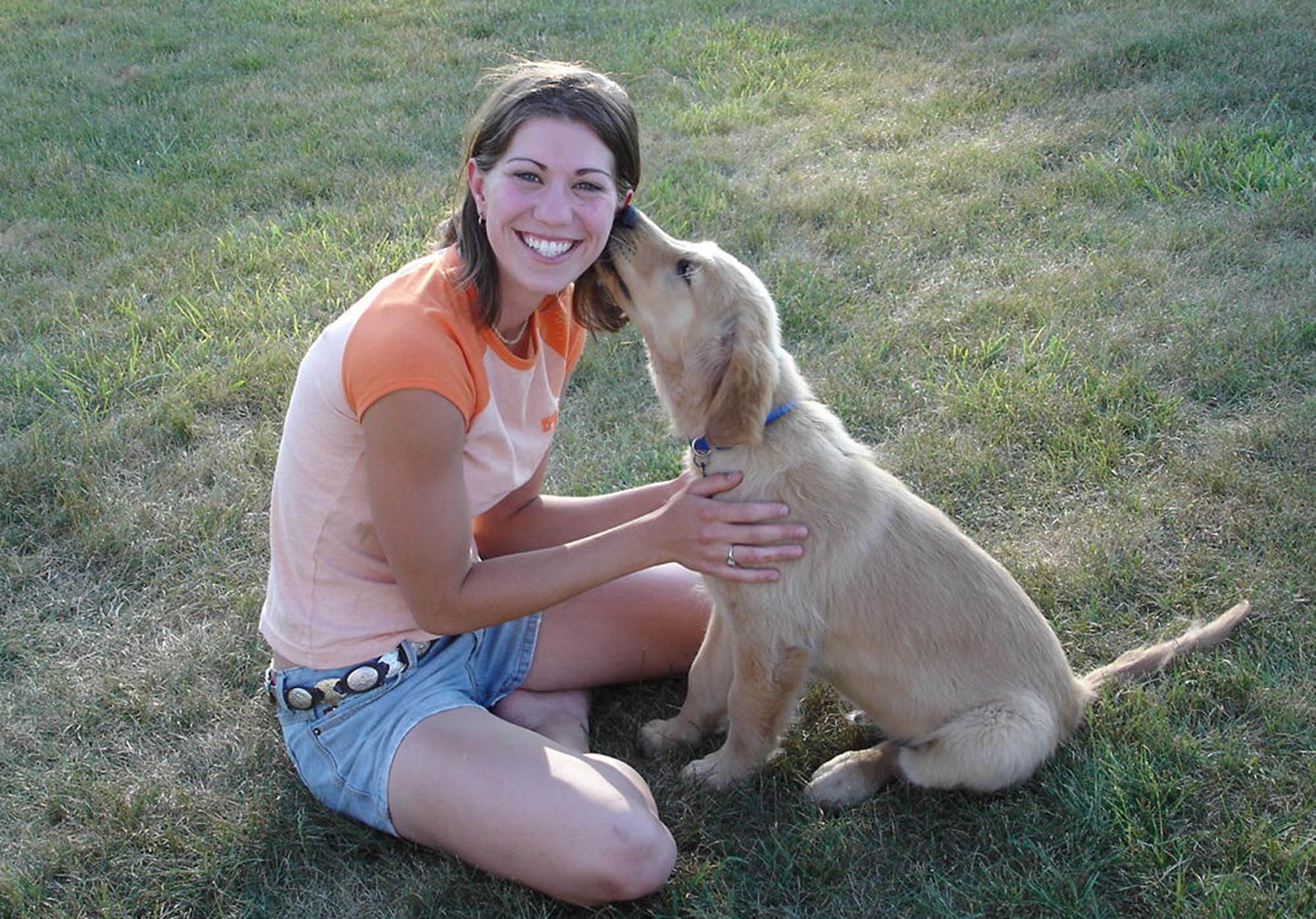 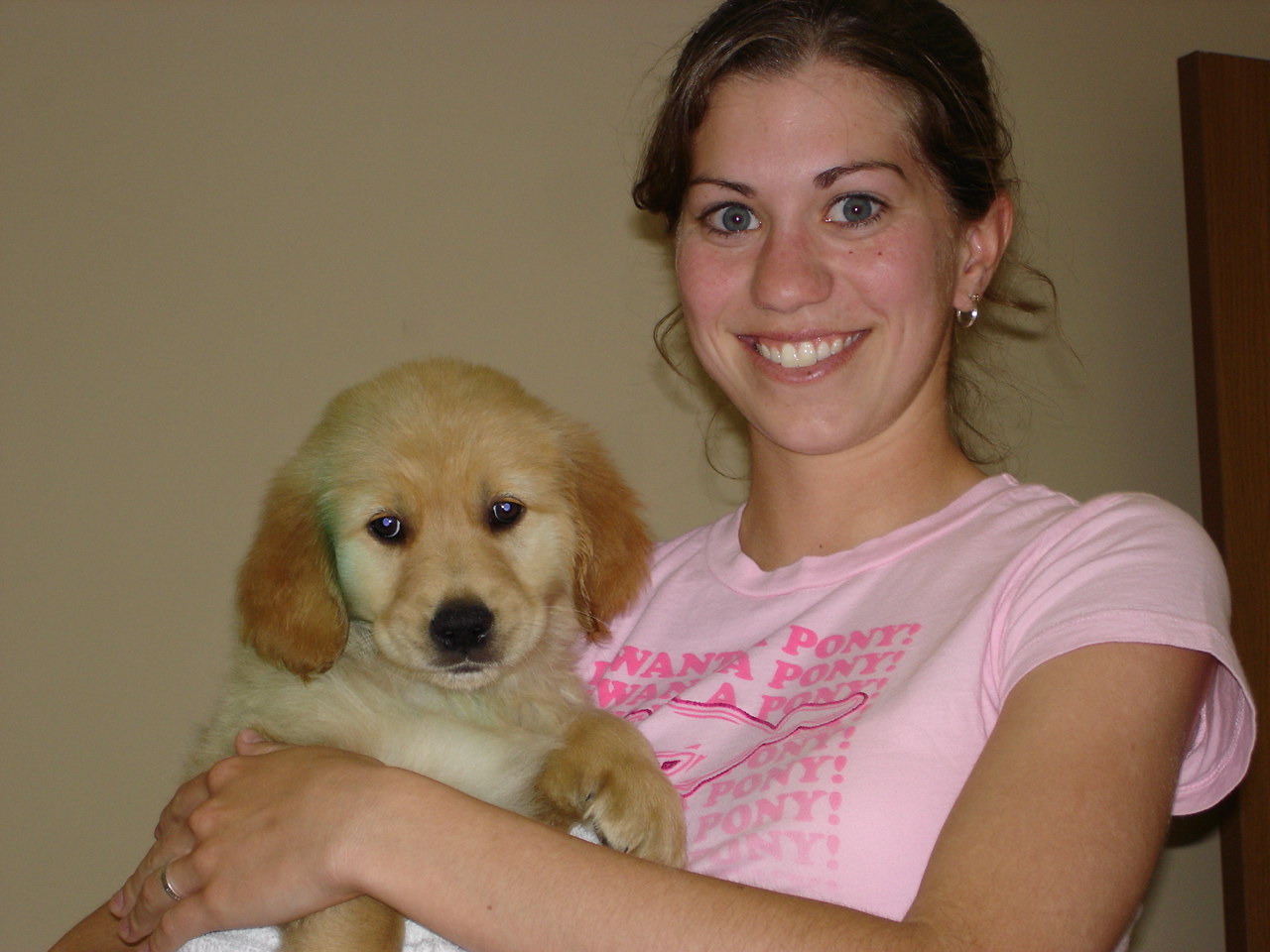 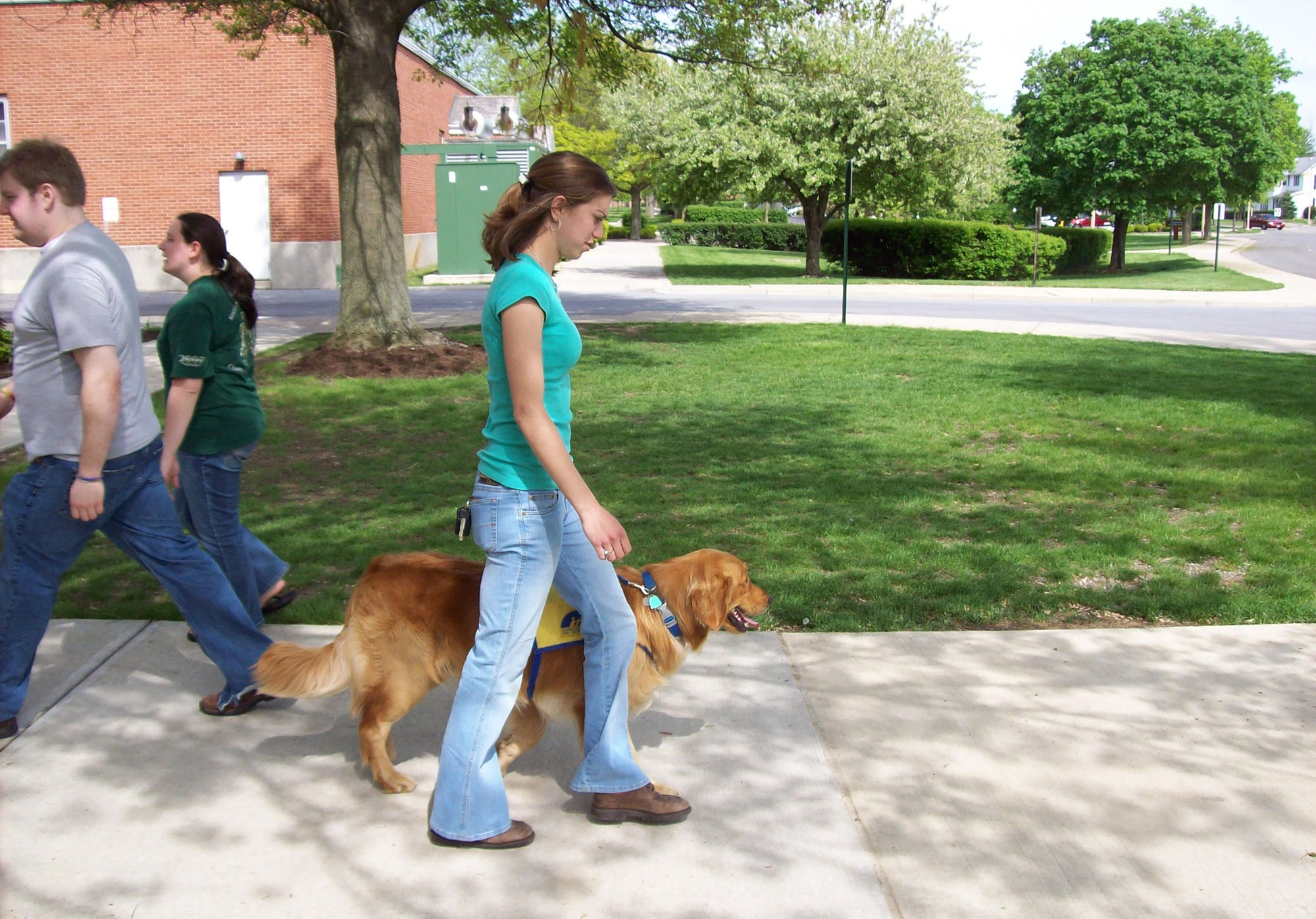 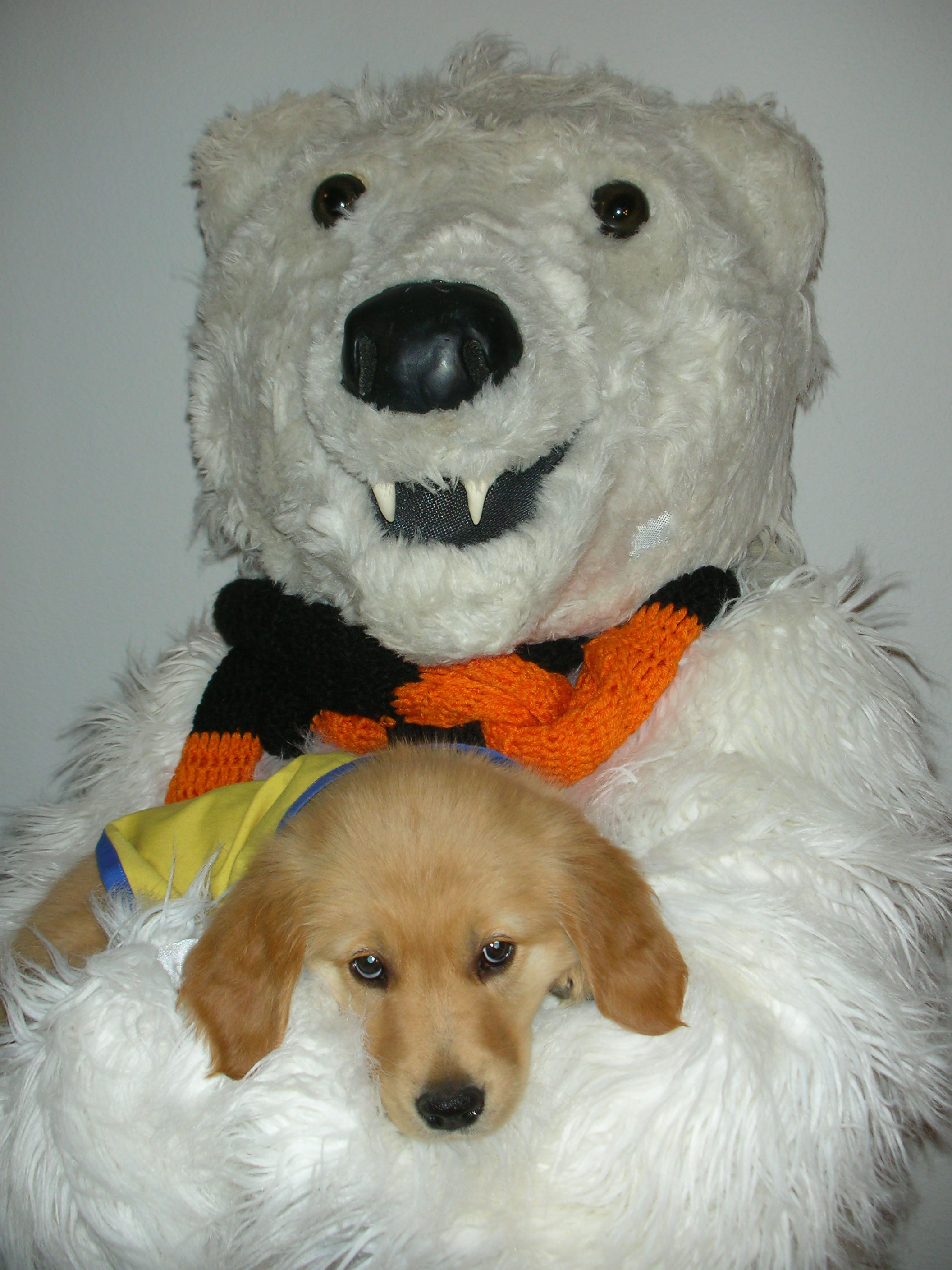 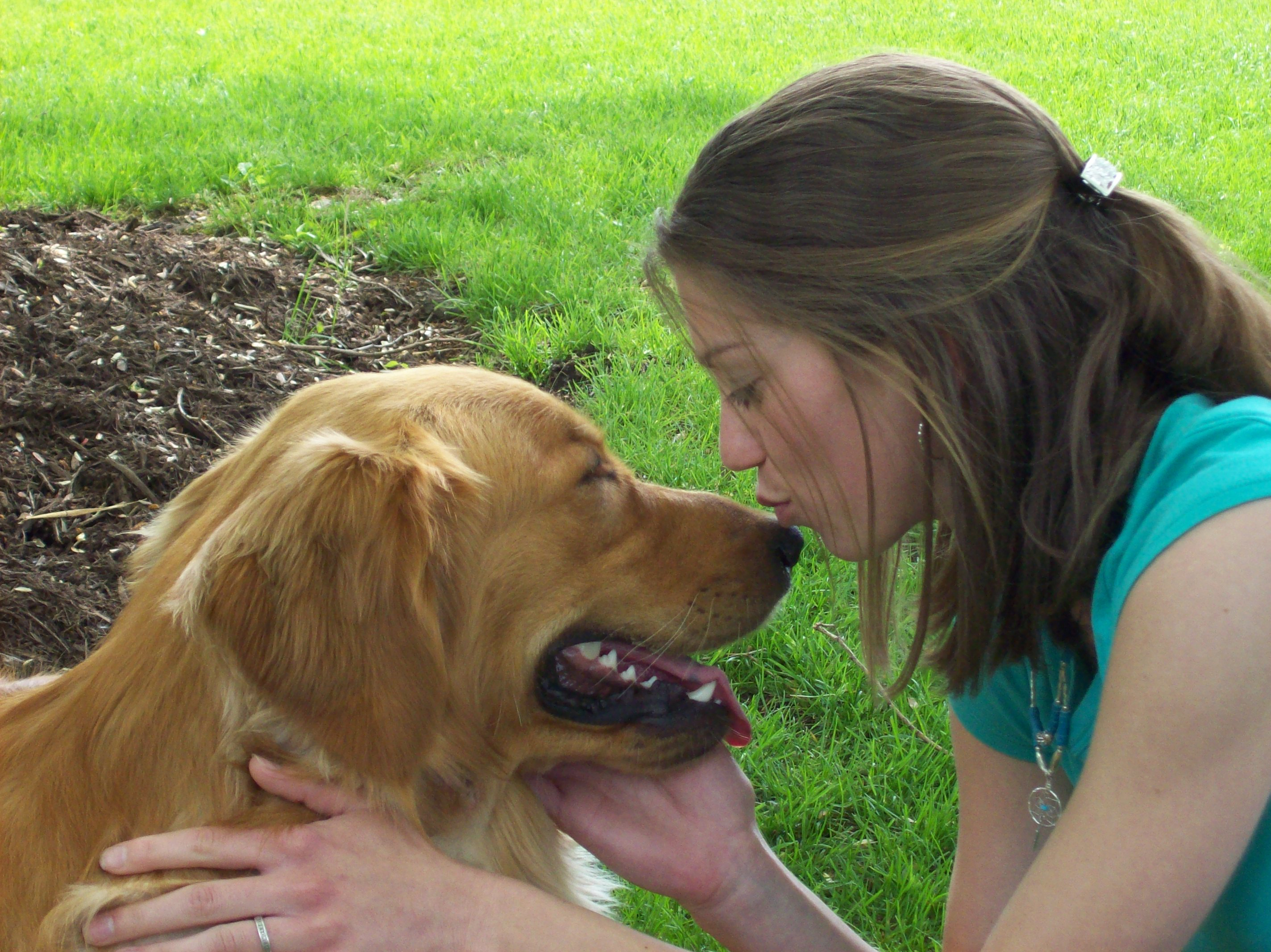 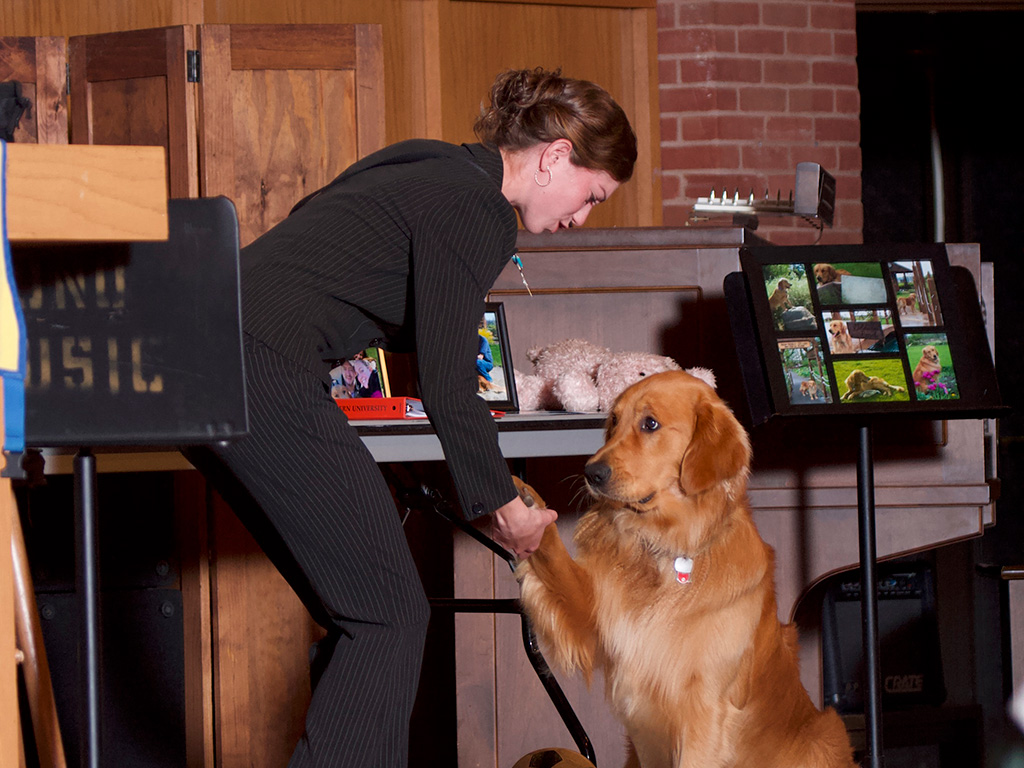 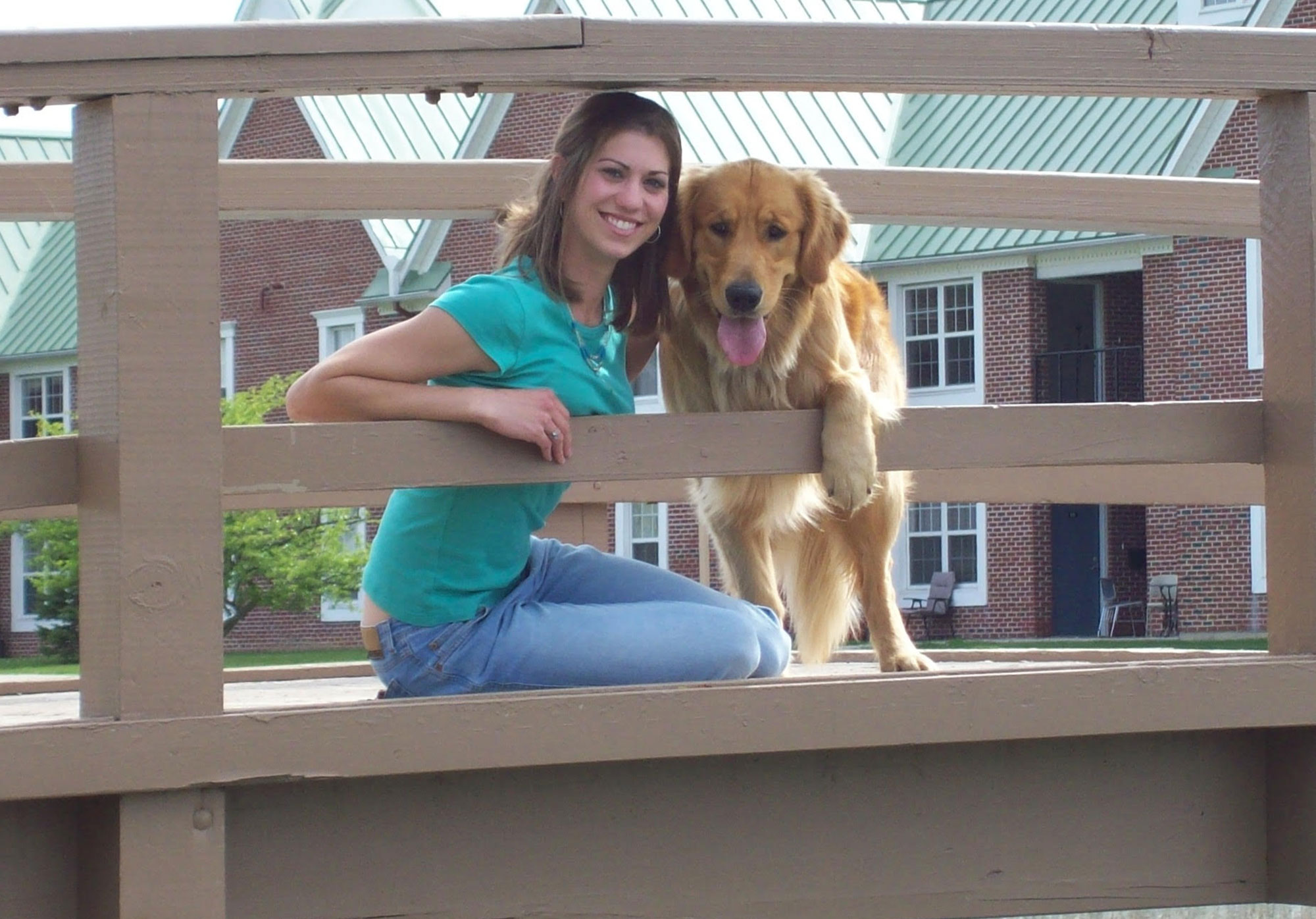 J.J. and Zeeke on graduation day 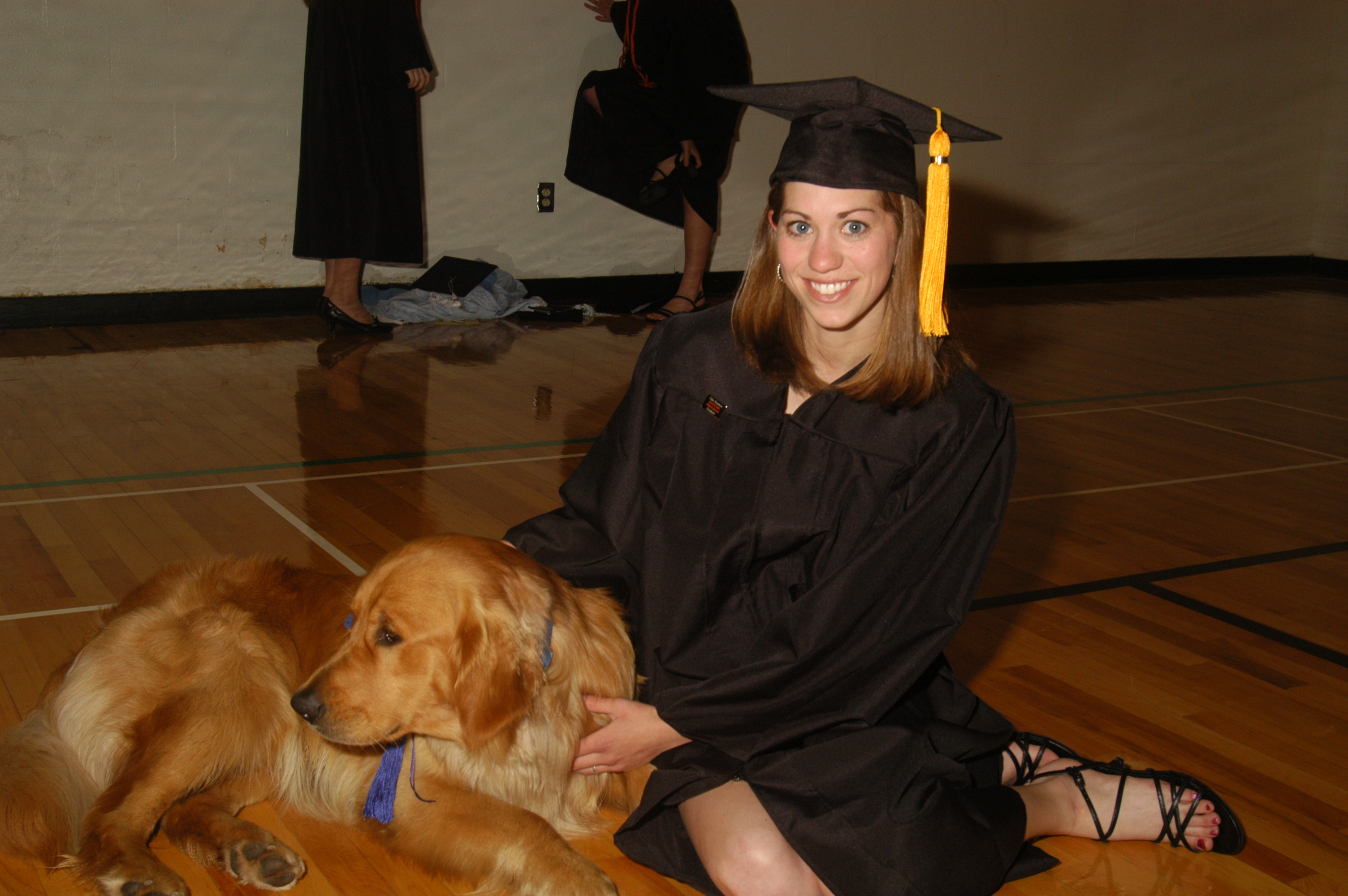