A Climb to Remember

Scroll to bottom of the page for a photo gallery.

The 9/11 Stair Climb, as it has come to be known, began as an ROTC effort, started by recent graduate Bryce Bouman, BS ’19, but this year marked the first time that it took place on ONU’s campus as an organized public event, hosted by the newly re-established Ohio Northern Veterans Organization (ONVO). The event’s purpose is to honor the memory of 9/11 by climbing the equivalent of 110 flights of stairs – the same number of stairs that first responders courageously climbed at the World Trade Center on that fateful September day under a blue sky tainted with black smoke.

Marching in unison, the group embodied the passionate unity that took place after 9/11. For those of us who can remember, it serves as a poignant reminder. We all remember where we were that day and how it made us feel to witness the deadliest attack on U.S. soil.

But the majority of the young participants in this climb don’t have this recollection.

Sophomore criminal justice major and ROTC member Lillian Hirschfeld was one of them. She may not have her own memory of 9/11, but it's something she will never forget.

“As an ROTC member it is so important for us to remember 9/11 because that event stands for so much more than ourselves,” she says. “Every day we represent the United States of America, and we must always advocate for the past, present and future sacrifices made by those brave men and women. 9/11 is an event that changed so much for our country and all of the lives affected. Many lost their lives or loved ones and sacrificed everything to keep us safe. It is up to us to never forget that, and as ROTC cadets, we must make sure that happens.”

That’s why, as president of ONVO, she felt it was so important to organize this event and participate. She made the 24 reps up and down the tallest part of the stadium, all with her Army rucksack – a pack weighing roughly 45 lbs. – strapped to her back. The pack represents the amount of gear that first responders carried with them up the steps of the twin towers.

Hirschfeld, in fact, comes from a long line of military veterans. A relative of hers was actually working for the Pentagon when the attack occurred but, thankfully, was out of the office that day. It’s always been a special day of remembrance for her family.

But never before had she experienced something quite like this.

“My biggest emotion I felt was gratitude to see all of the people participating and all of the hard work that was put into the stair climb. I also felt a sense of remembrance for all of the brave men and women who lost or sacrificed their lives. I have always felt this way towards 9/11. However, never in my life have I felt it to this extent while climbing the stairs.”

She wasn’t the only one.

For men's lacrosse coach Nat St. Laurent, a U.S. Army veteran, 9/11 was the reason he decided to join the fight against terrorism, and several of the men's lacrosse players have parents who are veterans, police officers or firefighters. Two current seniors who participated, Sam Neff and Tristan Hancock, completed their officer training over the summer and will become commissioned officers in the U.S. Marine Corps upon graduation.

“It was great seeing so many people from the ONU and Ada community at the event and supporting an unbelievable cause," St. Laurent says. "Never Forget."

Roughly 100 students attended the event, including some of Hirschfeld’s sorority sisters from Delta Zeta and the men’s lacrosse team. Also in attendance were local first responders and even a disabled veteran.

The event also helped raise funds and collect donations for military members. A total of $250 in monetary donations, as well as food, hygiene and entertainment items, was received and will go toward creating care packages for troops overseas, many of whom are stationed in the Middle East to combat terrorism.

Leslie Bostick, instructor of nursing and co-advisor of ONVA, was deeply moved by the display of support and remembrance.

"This event was inspired by our ROTC students, and I couldn’t be prouder,” she says. “Even though the students we have on campus right now are too young to remember this horrific event firsthand, they showed up in a BIG way! I was brought to tears.”

ONVO hopes to make the stair climb a new tradition on campus and looks forward to including more of the Ada community next year. One thing’s for sure – 9/11 will never be forgotten at ONU.

Roughly 100 students participated in the 9/11 Stair Climb, as well as local first responders and veterans. 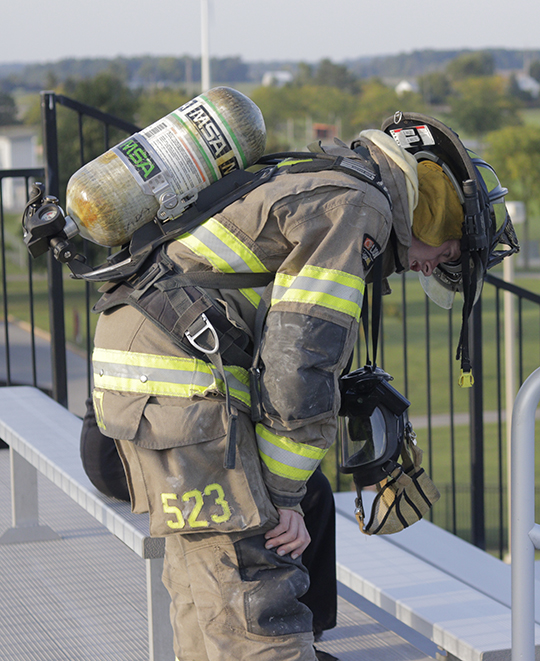 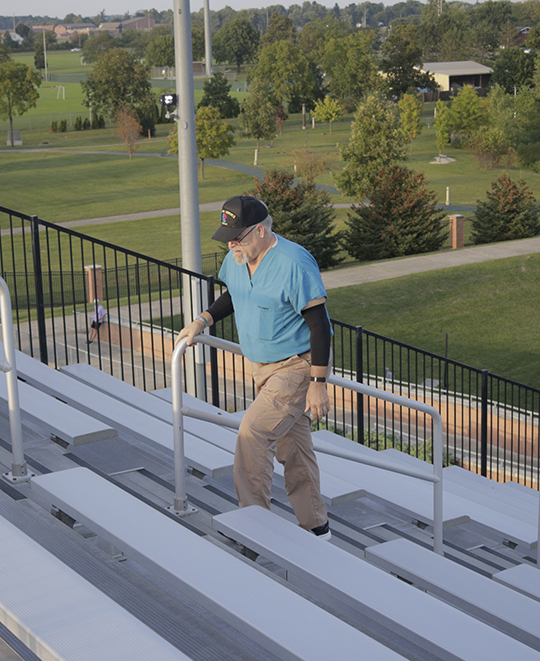 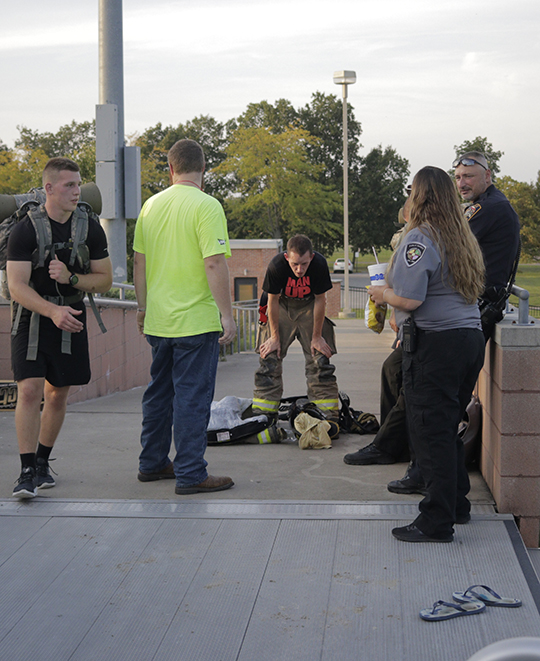 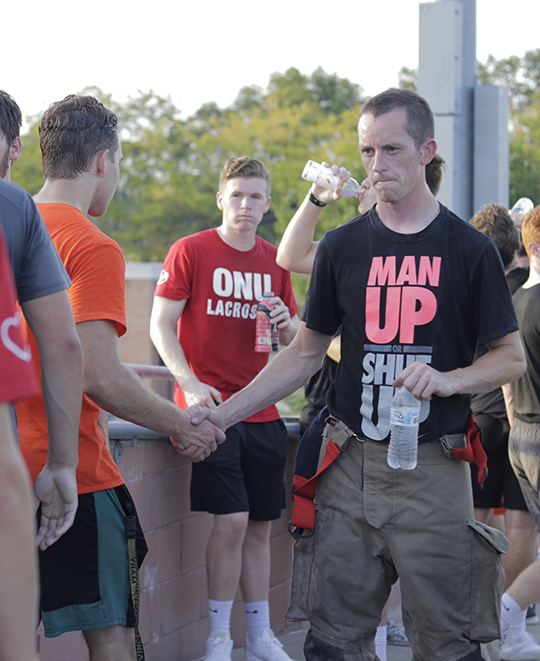 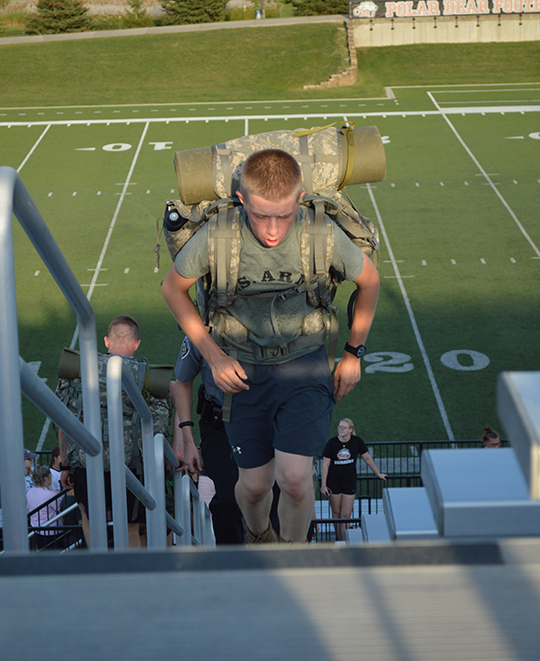 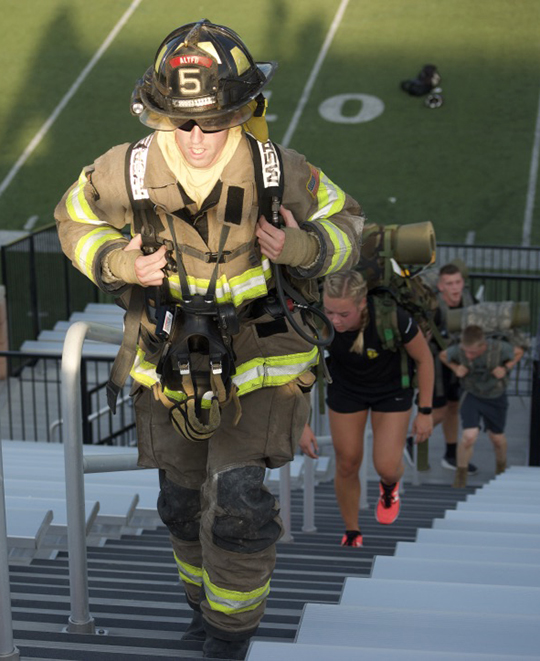 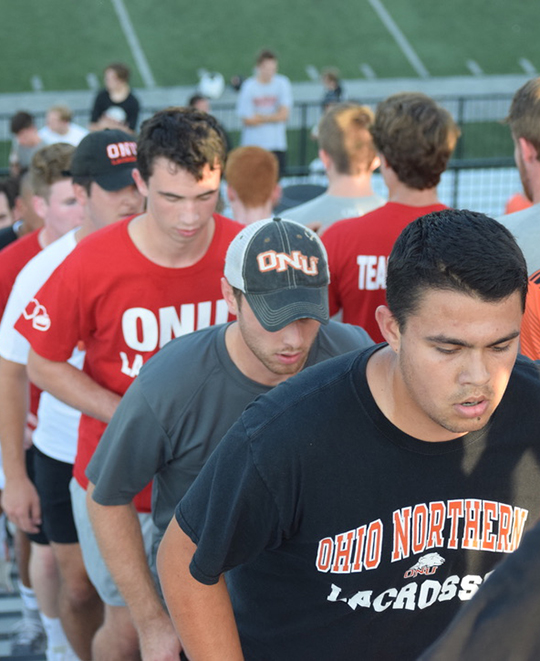 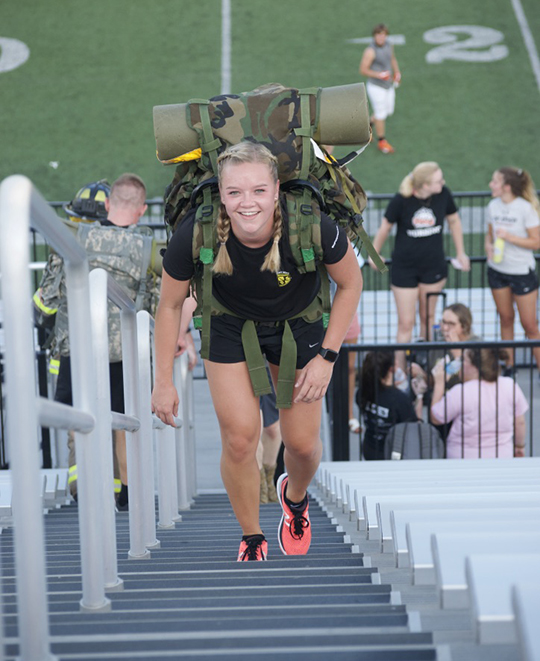