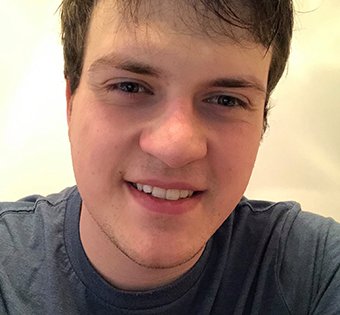 Alumnus Matthew Golden, BS ’17, used his dual degree in physics and mathematics to launch his career as a professional researcher. He is currently a graduate student at Georgia Tech, where he also works as a graduate research assistant.

Upon graduating in December 2017, Matthew worked as a telematics engineer at Hyundai America Technical Center Inc. (HATCI) until starting graduate school in the fall. There, he helped test new models of Hyundai, Kia and Genesis cars and ensure they were ready for the North American market. His time at HATCI provided valuable real-world work experience.

He began his graduate studies at Georgia Tech in August 2018, and he has since earned an MS in physics. He is currently working toward his Ph.D. in physics, studying data-driven model discovery and nonlinear dynamics.

As a graduate research assistant, Matthew is essentially a full-time researcher, charged with developing alternatives to machine learning that result in a physically interpretable model. His job responsibilities include working on papers and being a teaching assistant (TA) for undergraduate and graduate courses. He also enjoys being a mentor to undergraduates who want to research with his group.

As to what he enjoys most about his current endeavor, he says, “I most enjoy the research process. Identifying interesting problems with the potential to impact other areas is exciting. I get to be creative and, dare I say, artistic.”

One of the most valuable skills Matthew learned at Ohio Northern University was how to learn quickly and adapt to change. As an undergraduate, he discovered how to identify what he didn’t understand and then tackle his own weaknesses accordingly. As a result, he has excelled in graduate courses in physics, mathematics and mechanical engineering. “This has been a very useful skill in keeping up with the ever-changing world of research.”

He still stays connected to his roots at ONU, keeping in touch with his undergraduate professors and participating in the Ohio Northern University Alumni Club in Atlanta.