Tom Kier: To Bee or Not to Bee

As we celebrate ONU’s sesquicentennial, we are checking in with retired professors and staff to see how they are living the mantra of lifelong learning. Some are going in surprisingly creative and interesting directions.

For 30 years, Tom Kier, BSPh ‘82, monitored the students and happenings at Ohio Northern’s Raabe College of Pharmacy. Now, the former professor and administrator is monitoring another hive of activity, only this time, it’s of the winged variety. In retirement, Kier has become an avid beekeeper. “It’s a whole new world,” he says.

Kier’s unusual post-retirement hobby has taken him full circle. In just a few short years, he’s developed a level of expertise on bees and beekeeping that has made him in demand as a teacher once again, sharing his knowledge with youth groups, giving talks at community events and mentoring novice beekeepers.

Kier joined ONU’s pharmacy faculty in 1986, became assistant dean in 1987, and served in administrative roles until his retirement in 2016. Over three decades, he assisted more than 4,000 ONU pharmacy graduates. He recruited and counseled students, played a key role in curriculum development, and became a leader in the state of Ohio on the issue of ethics and morality in the pharmacy profession. 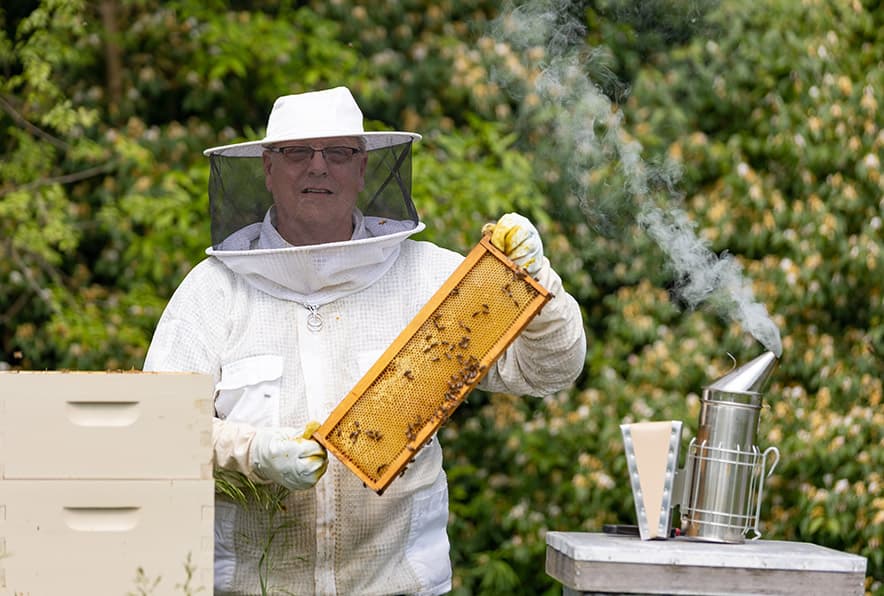 Upon retirement, Kier’s first order of business was to tackle home improvement projects. But soon his growing fascination with honey bees began to distract him from his “honey-do” list.  “I had always been interested in bees,” he says. “And I noticed that I wasn’t seeing as many around. I wanted to learn more.”

Honey bees aren’t native to North America. European settlers imported the honey bee in the 1600s and the insect adapted and became a super pollinator of flowers, fruits and vegetables. In the last few decades, however, pesticide use, habitat degradation and the dreaded varroa mite, have conspired to greatly endanger the honey bee population.

Only 50 years ago, beekeeping was a straightforward hobby requiring little knowledge or effort, explained Kier. Today, keeping hives requires careful management, and even the most experienced beekeeper can expect to lose 30 to 50 percent of their bee population every year. “There are a lot fewer beekeepers than there used to be because it is an ongoing fight against pests and problems,” he said. “Beekeeping has become an art as much as a science.”

The more Kier uncovered about honey bees and their management, the more engrossed--yet overwhelmed-- he became. “My wife told me I had gotten ‘analysis paralysis,’” he said, with a laugh. “I was researching too much and just needed to jump in and do it.”

So that’s what he did. Kier set up two hives on the 27 acres of land in Hardin County that he and his wife, Karen Kier, BSPh '82, purchased to promote habitat conservation of pheasants and other wildlife. Karen is professor of clinical pharmacy, director of assessment and director of the Drug and Health Information Center at ONU’s Raabe College. Because she is allergic to bee stings, however, she doesn’t help with the hives.

Kier now manages between two and five hives on his land. On any given sunny day in the spring, summer or fall, you may find him in his buckwheat fields or woods observing the honey bees in action. He pays close attention to which flowers they visit and the size of the pollen sacks on their back legs. These first-hand observations assist with his knowledge and hive management strategies. It’s also a pretty peaceful and relaxing way to spend your time, he says. “My former students and colleagues may not believe it, but I’m an introvert,” he laughs.

Kier’s scientific background aids him in evaluating treatment options for varroa mites, which can be a controversial subject. “You are treating a bug on a bug,” he says. “You don’t want to kill the bee and you want to keep the honey and wax free of pesticides.”

Additionally, if you use the same product too aggressively, the mites can develop a resistance to the product, just like overtreating humans can result in antibiotic resistance, added Kier. Some honey bees, however, are developing natural defensive mechanisms against varroa mites. Kier is becoming increasingly intrigued by the genetic research being done to strengthen bee populations. He’s directing his efforts toward helping to fortify the genetics of the Ohio honey bee. “I try to get strong bees and keep them within the community,” he said. “I do not bring in bees from outside Ohio.”

One of the perks of beekeeping is the honey, and Kier collects plenty of the sticky sweet substance. Bees make more honey than they need, so “honey is the rent we collect as beekeepers,” says Kier. He gives away and sells both raw and processed honey and he started making his own lip balm. He may experiment with compounding other honey-based products.

While Kier insists he’s still doing more learning than teaching, he has been receiving regular requests to share his knowledge with school children, community clubs and other aspiring beekeepers. In his talks, he emphasizes the importance of honey bees and other pollinators to our food supply. He encourages people to plant pollinator-friendly flowers and to limit their use of pesticides. Kier has been quite pleasantly surprised, in fact, by how many people are interested in honey bees. But then again, he says, “they are pretty fascinating creatures.”

Do you know of an ONU retiree with an interesting story to share? Contact Laurie Wurth Pressel at l-wurth-pressel@onu.edu.