The volleyball program at Ohio Northern University is legendary, with a tradition of achievement that few Division III schools can match.

In the program’s 63-year history, the team record stands at 1,383 wins and just 457 losses. Since the Ohio Athletic Conference began sponsoring volleyball in 1984, ONU has dominated with 27 OAC Regular Season Championships and 22 OAC Tournament Championships. And, in the 41-year history of the NCAA Division III Tournament, ONU Volleyball has made 33 tournament appearances, which ranks second among all DIII institutions.

Behind these incredible statistics are stories of female coaches and players whose grit enabled ONU Volleyball to evolve from an insignificant intramural program into a powerhouse in Division III athletics.

As ONU commemorates the 50th anniversary of the passage of the groundbreaking Title IX legislation, the coaching icons of ONU Volleyball are speaking out about breaking barriers and building success in women’s athletics.

Kovalchik never intended to become a maverick who would push the boundaries at ONU, but the times required it of her. “It’s difficult if not impossible to quantify where women’s sports came from to where they are now,” she says.

Indeed, the starting point for ONU Volleyball was dismal. Not only at ONU, but at higher educational institutions across the U.S., women’s sports were not taken seriously and garnered little to no institutional support.

Kovalchik took charge of a volleyball team that consisted of mainly physical education majors who played for fun. With no player recruitment, no uniforms and no regular game schedule, the team hardly seemed like an athletic program.

As Kovalchik undertook the task of building a program from scratch, U.S. President Richard Nixon signed into law Title IX on June 23, 1972. The law prohibited sex-based discrimination at any educational institution that received federal dollars.

“The passage of Title IX completely changed the landscape of women’s sports, opening the door to previously non-existent opportunities and changing what was possible for women and girls,” says Kate Witte, ONU’s head volleyball coach from 1991-2020. “Those 37 words changed the world of women.”

Forces of change are often met with resistance, however, and Title IX wasn’t an exception. Many men and even some women wanted to maintain the status quo. According to Kovalchik, the prevailing attitude among most male athletic directors was “if we ignore it (Title IX), it will just go away.”

Only it didn’t go away, due mainly to the dogged determination of female coaches and health and physical education teachers. While filing lawsuits to address inequality was certainly an option, many female coaches—including those at ONU— chose not to go that route. Instead, they worked within their institution’s structure to press for equal treatment.

Ludwig, a revered figure in ONU’s history, is widely credited for founding women’s sports at ONU. She returned to her alma mater in 1963 to help coach basketball, volleyball, tennis and softball and to teach health courses. Not just on campus but in the Ada community where she had lived all her life, Ludwig was highly respected, says Kovalchik. Because she was so dynamic and well-liked, people tended to listen to her. “Helen was the leader (of the three of us) and I loved her dearly,” said Kovalchik. “She made it easy for us (to push for change).”

Still, speaking out for equality for women’s sports got uncomfortable and messy in the 70s and 80s. “It made you a target,” says Kovalchik. “You got branded as the one who was out to destroy men’s sports, which of course wasn’t the case at all, we just wanted to grow women’s sports.”

Loud voices across the country opposed women receiving equal athletic opportunity. Women who played sports were called “tomboys” and accused of wanting to become men. Some argued that playing sports was too dangerous and could harm women’s reproductive organs, even though, ironically, it’s the male reproductive organ that’s in the more vulnerable position outside of the body. Some universities cut men’s minor sports programs and blamed it on Title IX.

During this time, Kovalchik often sported a T-shirt with the words “How come he is an athlete and I am a tomboy?” emblazoned on it.  She wore and washed the shirt so many times it became threadbare.

At ONU, just like at most universities across the country, women’s athletic teams took a back seat. The university transported the men’s teams to away games in buses and vans. The women’s teams? “The coaches needed big cars,” says Kovalchik dryly. Some of the men’s teams had the luxury of two or three sets of uniforms, while three women’s teams shared one set of uniforms. “The volleyball team would use the uniforms in the fall, pass them on to basketball in the winter, which would pass them on to softball in the spring,” said Kovalchik.

Additionally, practice for the women’s teams was relegated to less-than-ideal time slots and to the small auxiliary gym in Taft until King-Horn Sports Center opened in 1974. “When players served, their feet were back against the wall, and players had to learn to pass between the low ceiling beams,” said Kovalchik.

Slowly but surely—due to the persistent efforts of Ludwig, Lauth and Kovalchik—women’s athletics at ONU began to achieve victories not just on the courts and fields, but in parity of treatment with the men’s sports programs.

Kovalchik notes that while some campus constituents may have resisted change, many supported it. In fact, an ONU faculty member (not associated with the athletic program) spearheaded a petition—which was passed by the entire ONU faculty— that resulted in ONU opening up its Athletic Hall of Fame to female athletes.

In 1989, ONU inducted its first female athlete into the Athletic Hall of Fame, and it was none other than Dr. Helen Ludwig. Kovalchik followed in 1991 and Lauth in 1994. In 2008, ONU also named its newly renovated women’s locker room in the ONU Sports Center as the Helen Spar Ludwig Women’s Intercollegiate Athletics Locker Room. The locker room also honors ONU women’s coaching legends Lauth and Kovalchik.

From the early days, Kovalchik centered ONU Volleyball on relationships and developing student-athletes who played with integrity, skill and tenacity. Witte, who followed Kovalchik as head coach, continued to place the focus on the development of student-athletes, as does current Head Coach Katie Kuhn, BA ’09.

“ONU Volleyball is special yes, because of the on-the-court success, but it is also special because every young woman in the program plays a role and is valued,” says Kuhn.

Kovalchik coached at ONU for 22 years, leaving in 1990 after she married to become the commissioner of the Michigan Intercollegiate Athletic Association (MIAA, the oldest conference in the country). She became the first female conference commissioner in the NCAA. Her record at ONU was 569 wins, 198 losses.

Throughout her tenure at ONU, she encouraged her players to laugh and find joy in what they were doing, and to “never walk away saying ‘what if.’” “There were expectations that translated into a real sense of team unity and singular sense of purpose, that purpose being success both in the classroom and on the court,” she says.

Witte took over in 1991 and served as head coach for 29 years, retiring in 2019. “I was fortunate enough to inherit the excellence and expectations of what Sheila started and built upon it to become the best and most respected NCAA volleyball program. ONU Volleyball is special because of our great success but most especially because of the great relationships and development of each student athlete during her four years at ONU,” she says.

In her nearly three decades as head coach, Witte coached over 400 student-athletes. Her record was 742-241 and her teams won 34 OAC regular season and conference championships and made 23 NCAA tournament appearances, 12 Sweet 16 appearances, five Elite 8 appearances and one NCAA Final Four appearance. She was named OAC Coach of the Year seven times and AVCA Regional Coach of the Year seven times. In 2021, ONU inducted Witte into the Athletic Hall of Fame.

Kuhn played volleyball at ONU and came back to be an assistant coach under Witte and then head coach when she retired. The 2022-23 season will be her third season as head coach. In her first two seasons, she achieved a winning 35-9 record. She says ONU has been a huge part of her life and shaped her into the woman she is today. She was honored and grateful to be able to return to her alma mater and “spread her wings” as an assistant coach under the tutelage of Coach Witte before taking over upon Witte’s retirement.

“I love coaching in general because it truly is teaching and developing young people,” she says. “I enjoy challenging student-athletes to exceed their expectations and grow both mentally and physically.”

Looking to the future

While great strides have been made in women’s athletics, there are still hills to climb. Unfortunately, there are even “rumbles in some constituencies about doing away with Title IX,” says Kovalchik. “At this juncture things still aren’t balanced as exemplified by the NCAA Women’s Basketball tournament which gained notoriety for horrible facilities in comparison to the men’s extravagant amenities,” she adds. “While this is only one example it’s symptomatic of the continued need to stay vigilant.”

She sometimes worries that today’s generation of female athletes may be too complacent. Many have no knowledge of what their grandmothers or mothers faced, and thankfully they’ve never been labeled a “tomboy.” “Grandmothers who played, or who wanted to, are watching their granddaughters sometimes with envy, but always with pride,” she says.

The anniversary of Title IX inspired Kuhn and volleyball assistant coach Brian Hofman, to dig into the past and learn more about the history of women’s sports. “It has inspired me to know that Ohio Northern had strong leaders and women pushing for equality from the beginning,” says Kuhn. “It has been eye-opening to hear the stories from 40-50 years ago and the battles that women were fighting in order to have the opportunity to play a sport they loved.”

Kuhn says she recognizes that there are steps yet to take. “I take pride in knowing that Ohio Northern University will continue to place importance on equality and challenging the status quo,” she adds.

Kovalchik agrees, and often shares this advice with young women today: “If playing sports has impacted you positively and you see the value of sports for women, then you better continue to fight for it.”

Follow the Ohio Northern University Facebook page because throughout the next few months we will be featuring ONU female athletes from throughout the decades.

“It’s difficult if not impossible to quantify where women’s sports came from to where they are now.”  - Sheila Wallace Kovalchik

Katie Kuhn, a former ONU volleyball player, is in her third season as head coach of ONU Volleyball, building upon an outstanding legacy left to her by her predecessors. 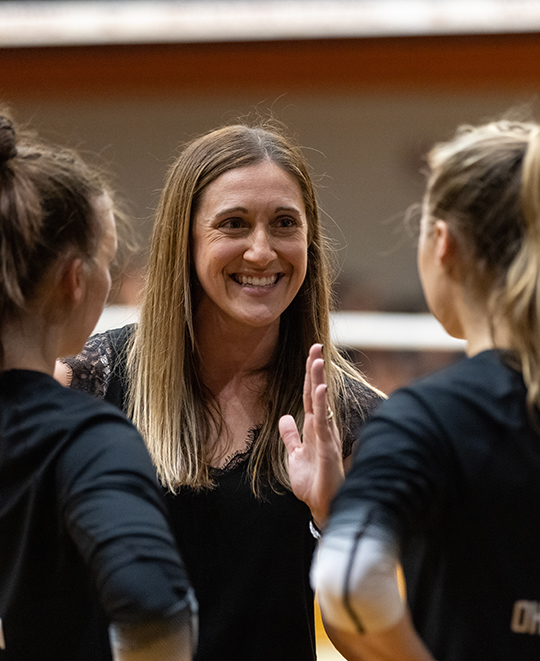 A leading voice for women’s athletics at ONU before, during and after the passage of Title IX, Helen Ludwig earned legendary status at ONU. She became the first woman inducted into ONU’s Hall of Fame in 1989. 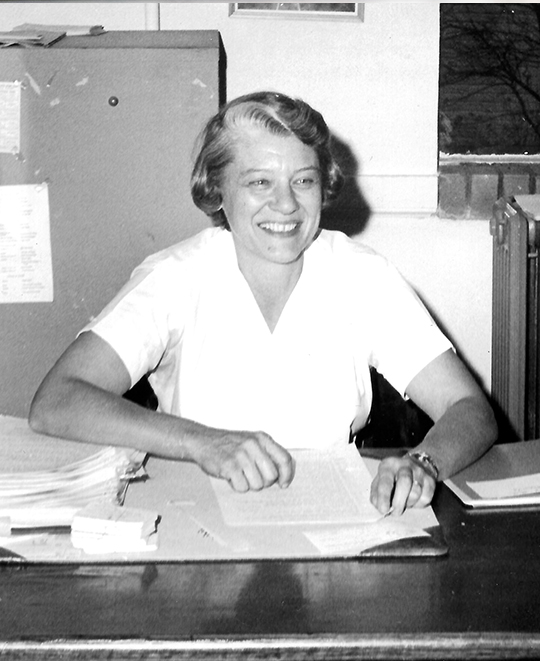 Gayle Lauth coached basketball at ONU from 1972-1992, building a successful program and pushing for equality. ONU inducted her into the Athletic Hall of Fame in 1994. 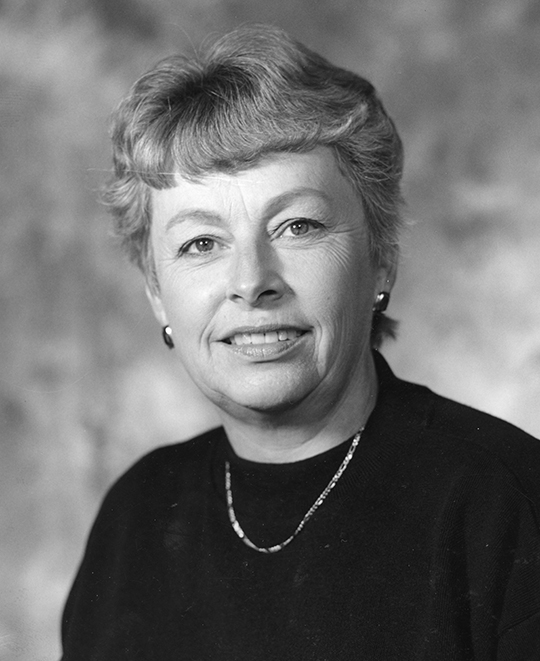 Sheila Wallace Kovalchik coached volleyball at ONU from 1969-1990. She then became the first female commissioner in the NCAA, Division III. ONU inducted her into the Athletic Hall of Fame in 1991. 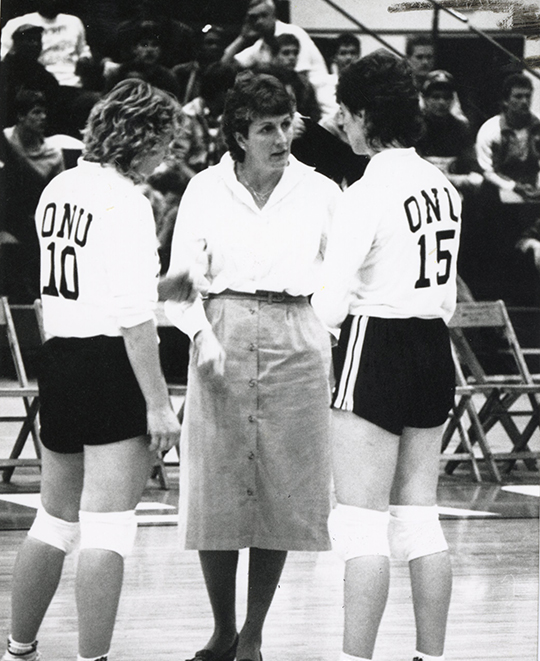 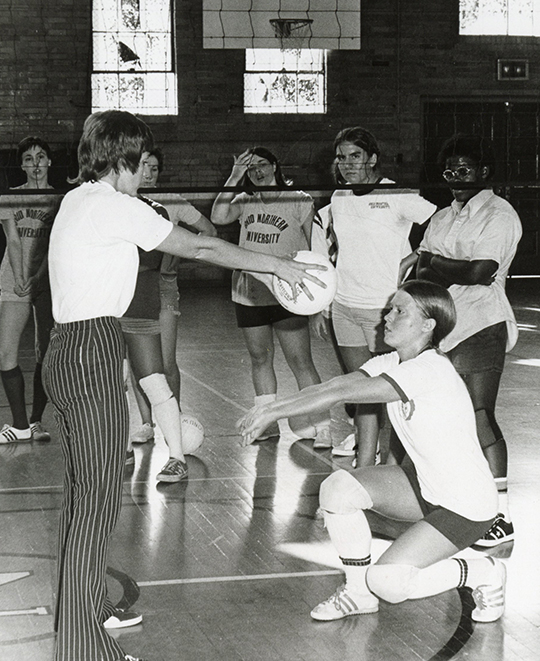 Kate Witte, head volleyball coach from 1991-2019, built ONU Volleyball into one of top programs in NCAA Division III. ONU inducted her into the Athletic Hall of Fame in 2021. 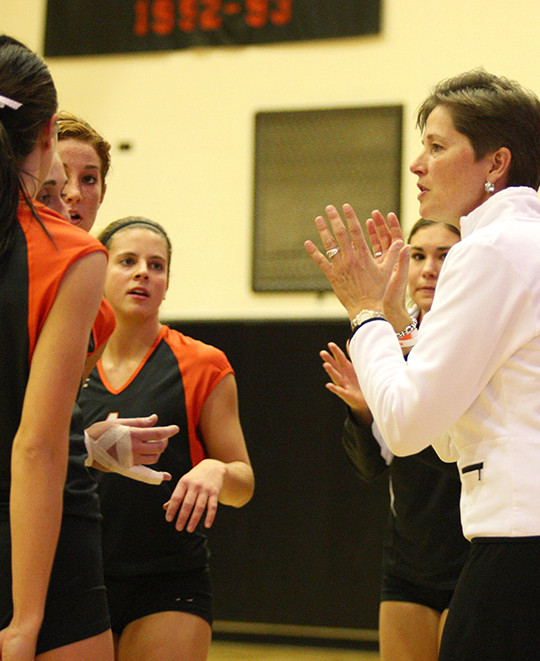 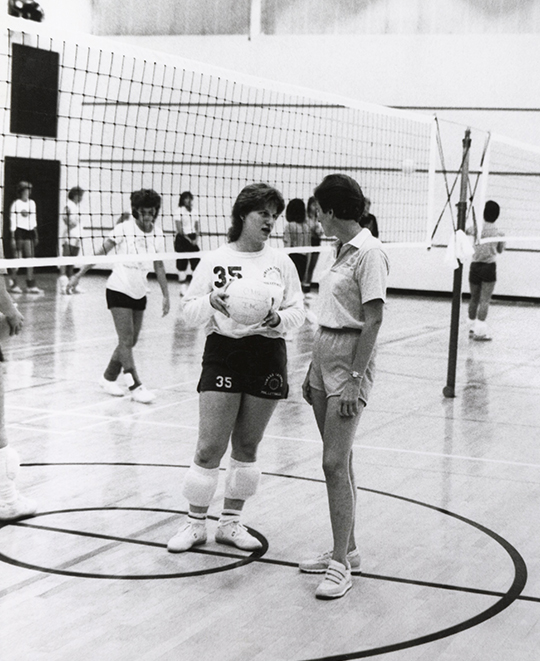