Portrait of a Namesake: T.J. Smull

Dr. Thomas Jefferson (T.J.) Smull, BSCE 1904, BSME 1906, Hon.D. ’47, namesake of the College of Engineering, was a man of character and consequence. Intelligent and gregarious, he was affectionately known as “Tommy, the Grand Old Man” by his former students and friends.

While Smull left an enduring legacy at Ohio Northern University, his influence stretched far beyond the campus grounds. At a time when many engineering disciplines were still in their infancy, he not only led efforts in Ohio to advance the field’s professionalism, he taught and mentored countless engineers who helped build America.

Without a doubt, everyone on ONU’s campus knew civil engineering student Tommy Smull in the early 1900s. The old cliché “big man on campus” aptly describes Smull. Tall and athletic, captain of the football and baseball teams, he was known as a “mixer and good scout.”

Smull hailed from Pennsylvania where his father was a prosperous local merchant. The catastrophic Johnstown Flood of 1889, however, wiped out his family’s store and all its merchandise. With his family penniless and struggling to rebuild, Smull had no choice but to work and save for college. Before ONU, he attended two other universities and served for several years as a local school superintendent.

Upon his arrival in Ada, Smull quickly made a name for himself on the gridiron. He caught the eye of Fielding H. Yost, the legendary University of Michigan coach who is widely credited for turning football into a national phenomenon. Smull left ONU to play football at UM for one season, joining Yost’s infamous “Point-a-Minute” squad. Throughout his life, Smull looked back with pride on his football feats.

According to historical accounts, ONU must also credit Smull for its name. In his student days, he reportedly played a leading role in encouraging the University to change its name from “Ohio Normal University” to “Ohio Northern University.” Smull possessed, according to ONU founder Henry Solomon Lehr, “exceptional executive ability” and “what is known as initiative.”

ONU President Dr. Leroy Belt took note of Smull, surely recognizing he was destined for great things. Shortly after Smull graduated from ONU, Belt sent him a telegram, requesting he come back to campus and become dean of engineering. Smull declined. Belt sent another request that Smull again turned down. In his third telegram, Belt was more direct: “Be here dead or alive Sept. 8, 1905.”  Receiving this strongly-worded telegram, Smull finally acquiesced, but mainly because he was engaged to an Ada girl, Miss Cora Kemp, whom he married the following October.

A man of action and accomplishments

Upon returning to Ada in fall 1905, Smull spent the next 37 years growing the reputation of Ohio Northern University and the engineering profession.

He served as dean of engineering from 1905 to1917; executive secretary from 1917 to 1929; and business manager from 1929 until his retirement in 1942. Yet his job titles tell only part of the story. During his tenure, he was also a practicing engineer and architect, overseeing the construction of numerous city sewers, farm drains, highways and buildings. Additionally, he rose to the helm of many civic and professional organizations.

Boundlessly productive, Smull was once described by the ONU Alumnus magazine as “displaying a rare administrative capacity for absorbing additional tasks and problems when already seemingly overloaded.” In other words, he was the person you turned to when you wanted something done.

To ensure only qualified engineers entered the profession, Smull strongly advocated at the state level for the licensing and registration of engineers and surveyors. In 1933, his efforts came to fruition when the state established the Ohio State Board of Engineering Registration of Professional Engineers and Surveyors. Smull then served as a chief examiner of that board until 1959, as well as a member and chairman for a number of years. As a prominent figure with the licensing board, he came to know thousands of engineering professionals throughout Ohio.

The state board of registration is only one example of Smull’s state-wide leadership. He also served as a member of the Board of Examiners for the Civil Service Commission, State Utilities Commission, Ohio Waterways Commission and the Scioto Conservancy Board.

Locally, he left a mark on the village of Ada. He served as the city’s engineer for 18 years and was a charter member of the Ada Kiwanis Club and the Town and Gown Club. In 1958, Ada Town and Gown honored him as “Man of the Year.”

A champion of sports his entire life, Smull earned the title “Father of Athletics” at ONU for building the University’s athletic programs. His entire time at Northern, he served as the equivalent of the athletics director today. He also served as President of the Ohio Athletic Conference. He even designed and oversaw construction of ONU’s first purpose-built athletic facility, Taft Gymnasium, in the late 1920s. Taft still stands today and is used for esports, dance studios, and athletic team offices.

Retiring from ONU in 1942 didn’t slow Smull down. He became a test engineer with the Ohio Department of Highways, working another 13 years until he turned 79. He instructed hundreds of highway technicians and was so well-liked by his co-workers that his departure was “an emotional one,” according to a local paper.

Smull possessed many admirable qualities. He read voraciously, enjoyed local history, had a great sense of humor, and was devoted to his wife and two children. He loved   dogs and took his fox terrier “Wimpy” along with him wherever he traveled. But his most endearing quality, according to many, was his genuine interest in people from all walks of life and his desire to help them succeed. ONU Engineering Dean Lawrence Archer, BSCE ’47, ACIT ’82, H of F ’88 once called him “a true friend of mankind.”

From a humble background and no stranger to hard times, Smull could relate to many of the ONU students he instructed. One engineering magazine stated: “There came to him (Smull) hundreds of farm and small-town youth with burning ambitions and no money, intent on mastering the fundamentals of mechanics, electricity or road building. The boys from affluent families went to Purdue, M.I.T. or Ohio State. To Tom Smull came the youth sustained only by a desire to increase his station in life.”

These ambitious students thrived under Smull’s care and tutelage. No student was unimportant to Smull. He believed the best in people, and he brought out the best. He went out of his way to be friendly and helpful, and was known for “often giving financial aid out of his own limited funds and assisting graduates to obtain employment and advancement,” according to the Encyclopedia of Biography.

One of his Northern colleagues, Dr. Chas McCracken, who later became president of the University of Connecticut, said this about Smull: “He has the knack of meeting men, mixing with them, and carrying them with him, regardless of their station in life.”

The engineers who won the war

While it would be impossible to uncover the full measure of Smull’s influence, we know that many of the engineers he taught at ONU became the builders of America. With their engineering expertise, they helped transform the U.S., which was mainly an agrarian society at the early part of the 20th century, into the world leader and industrial giant it became by the end of the second World War.

In particular, three of Smull’s students played an enormous role in United States’ victory in World War II. Industrial titan Benjamin Fairless, BSCE, Hon.D. ’35, rose to the helm of U.S. Steel and turned the company into the largest steel producer in the world during World War II and the post-war era. He served on an advisory panel for President Franklin D. Roosevelt and received the U.S. Medal of Merit--the highest civilian decoration in the U.S. at the time, for his manufacturing impact during the war.

Anthony (Tony) Muto, LLB, became chief of the Washington D.C. office of Movietone News. He produced the World War II newsreels that played before feature films in the movie theatres and kept Americans on the home front informed of what was happening and united in their war efforts.

And George Rappleyea, BSCE, a fascinating ONU alumnus who was greatly impacted by Smull, gave due credit to Smull’s influence in aiding him during a huge wartime effort. Rappleyea worked as vice president of Higgins Industries during the war. This company produced the Landing Craft Vehicle and Personnel (LCVP)—or Higgins Boats—that were used for amphibious landings. Before Higgins’ invention, many soldiers lost their lives during these landing operations, so the LCVP proved a game changer.

As VP, Rappleyea oversaw operations for the rapid production of LCVPs during the war, especially leading up to the D-Day invasion. As the company grew from 300 employees to over 20,000, the company’s owner, Andrew Higgins, worried about how they were going to train the men to build the ships, recalled Rappleyea. “I told him not to worry, that we would use the ‘T.S.’ method and we did,” he wrote.

“‘T.S.’ stands for both ‘Tommy Smull’ and ‘Technology Simplified,’” said Rappleyea. Unlike many professors at elite university who made technology difficult to show their superiority, Smull wanted students to understand the material, he explained. “No matter what the subject may be, he made you feel that it was the most fascinating and most interesting subject in all the world. He spoke clearly, looked you right in the eye and never used a big word where a short one would do. He never spoke over your head and you understood just what he was trying to impress upon your mind.”

And so, by using the “T.S.” method at Higgins Boats, Rappleyea said: “We not only trained the men to build the ships, we trained them the men to operate them.” The Higgins boats played a huge role in the D-Day invasion. Many historians believe the invention and rapid production of LCPVs turned the tide of the war. President Dwight D. Eisenhower once went so far as to say: “Andrew Higgins is the man who won the war for us.”

Smull spent his final years living in Ada in the home of his daughter, who served as a librarian at ONU. He died at age 86, on February 15, 1962.

Just two decades earlier, Smull was honored in Columbus, Ohio, on Abraham Lincoln’s birthday with a special luncheon attended by such prominent individuals as the Lieutenant Governor of Ohio and a Justice on the Ohio Supreme Court. One of Smull’s former students, Jim Fusco, BA ’23, who could not attend the luncheon, wrote a glowing tribute to Smull instead that was printed in the Columbus Citizen. He wrote: “Your body may get old Tommy, but your heart will always be young. I’m glad this luncheon is held on Lincoln’s birthday. You and he are alike in one supreme quality—you love the people as did Lincoln.”

Portrait of a Namesake: T.J. Smull 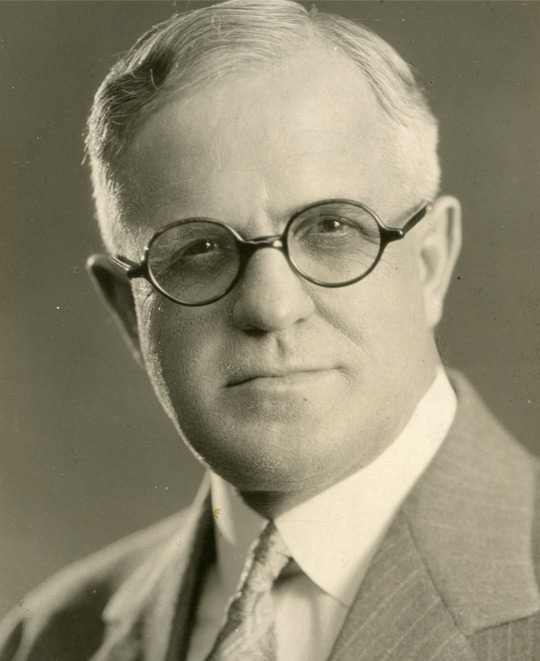 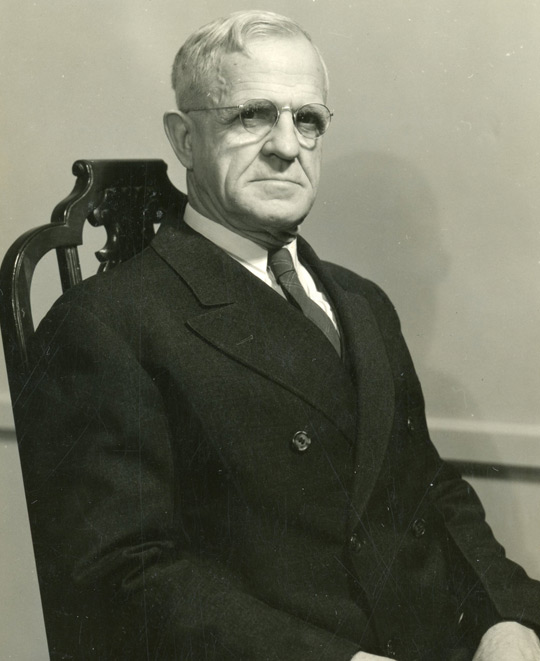 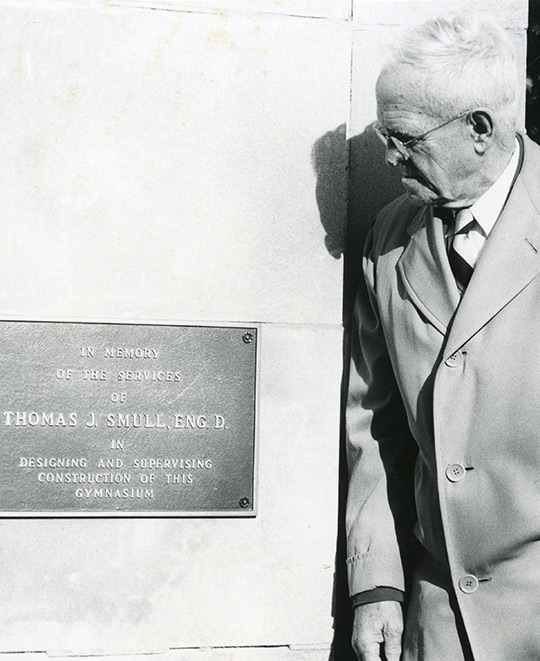 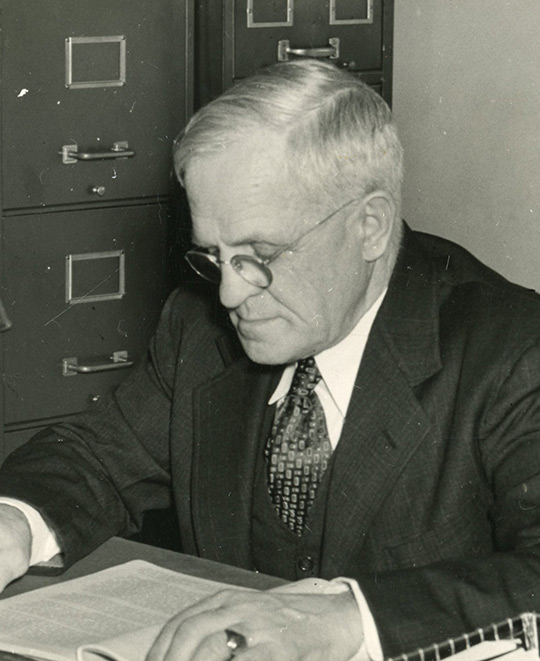