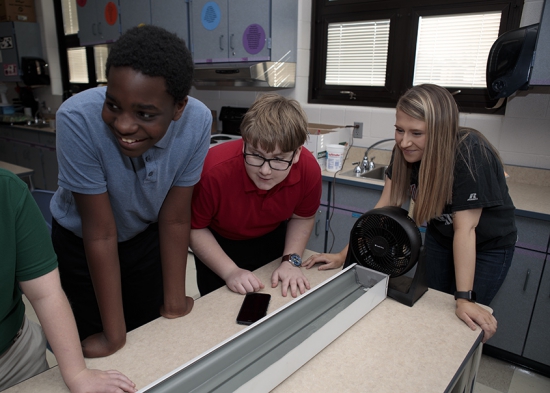 Engineering students influence the future of STEM by inspiring the next generation.

If you could look out and glimpse into the future, what would you see? For a group of Ohio Northern University engineering students, it would look like a recent outreach event that took place at Lima City Schools’ South Science and Technology Magnet.

On March 19, 16 engineering students shared their passion for science, technology, engineering and mathematics (STEM) by leading fourth-, fifth- and sixth-graders at the magnet school in four engineering-themed group projects: flying homemade hovercrafts, constructing bridge trusses out of pasta, testing miniature sail boats in water and assembling snap-circuit kits. The event was organized by ONU’s chapter of the American Society for Engineering Education and was entirely a volunteer outreach event.

The U.S. Bureau of Labor Statistics projects that by 2022, there will be 1 million more jobs in STEM-related fields than there were in 2012, and the rise of STEM careers is continually escalating. It’s today’s grade school students who will be the ones stepping into those positions – some of which haven’t even been created yet. ONU puts on engineering outreach events twice a semester, and there’s a reason there’s never a shortage of students from a variety of engineering majors who want to volunteer – they enjoy impacting and inspiring the next generation of STEM professionals.

I just love watching the kids’ faces light up when they do something right and they figure out what’s going on and just seeing the mental connection in their head,” says Payton Green, a senior civil engineering major who has participated in at least eight outreach events. “They realize that they can do this when they grow up, and it’s not out of reach.

For 10 years now, the Smull College of Engineering has put on similar outreach events at schools in Ada, Miller City and Ottawa-Glandorf, but this event marked the first time one has taken place in an urban school setting and the first time ONU students have volunteered in an elementary school that is specifically STEM-focused. The interaction with college engineering students, South Science and Technology Magnet Principal Chad Fallis says, is extremely beneficial to the magnet school’s students.

“For them to see adults who have career paths they’re working towards, that’s good exposure for the kids,” he says. “Sometimes our kids get some tunnel vision on what opportunities are available for them and what career paths are available, so anytime we can get them exposed to people who are going down different career paths, they can experience that and have those conversations, and it’s just a good chance for them to get exposed to additional role models.”

To introduce students to the basics of engineering and STEM career fields, the K-8 magnet school incorporates Project Lead the Way (PLTW), a national curriculum designed to empower students to develop and apply in-demand, transportable skills by exploring real-world challenges. Matt Walker, a senior computer engineering major, was fortunate to take PLTW courses as a high school student. The experience gave him an advantage entering Ohio Northern because he already knew which areas of engineering he wanted to pursue. At the outreach event, Walker got to be on the other side. He was able to see how PLTW helps students become more engaged with STEM at a younger age.

One particular interaction he had during the STEM outreach event speaks volumes to how mentorship from college students can make a difference. During the bridge truss project, one group of students couldn’t complete their truss on time, so he decided to see what had happened. He discovered they had gotten stuck on some calculations and couldn’t complete the project.

“I said, ‘Well, how about you guys be the quality-assurance engineers? You know, that’s a real job in the real world where people just check other people’s work,’” he says. “So I said, ‘Why don’t you just sit down and go and check the work and make sure that everybody else is calculating the right way?’ And they were very excited about that. They thought, ‘Wow, that’s what real engineers do.’”

At the end of each project session, the magnet school students had the chance to ask the ONU students questions like:

What do you love about science?”
“Why did you decide to major in engineering?”
“What did you want to be when you grew up?

In a way, this may have been the most impactful interaction of the entire day for both sets of students. For the ONU students, it reminded them of who they used to be. For the magnet school students, it showed them who they can become. The intermingling of the present and the future is something extraordinary, and there’s no better way to pass the torch than by way of inspiration.