One Giant Leap for ONU 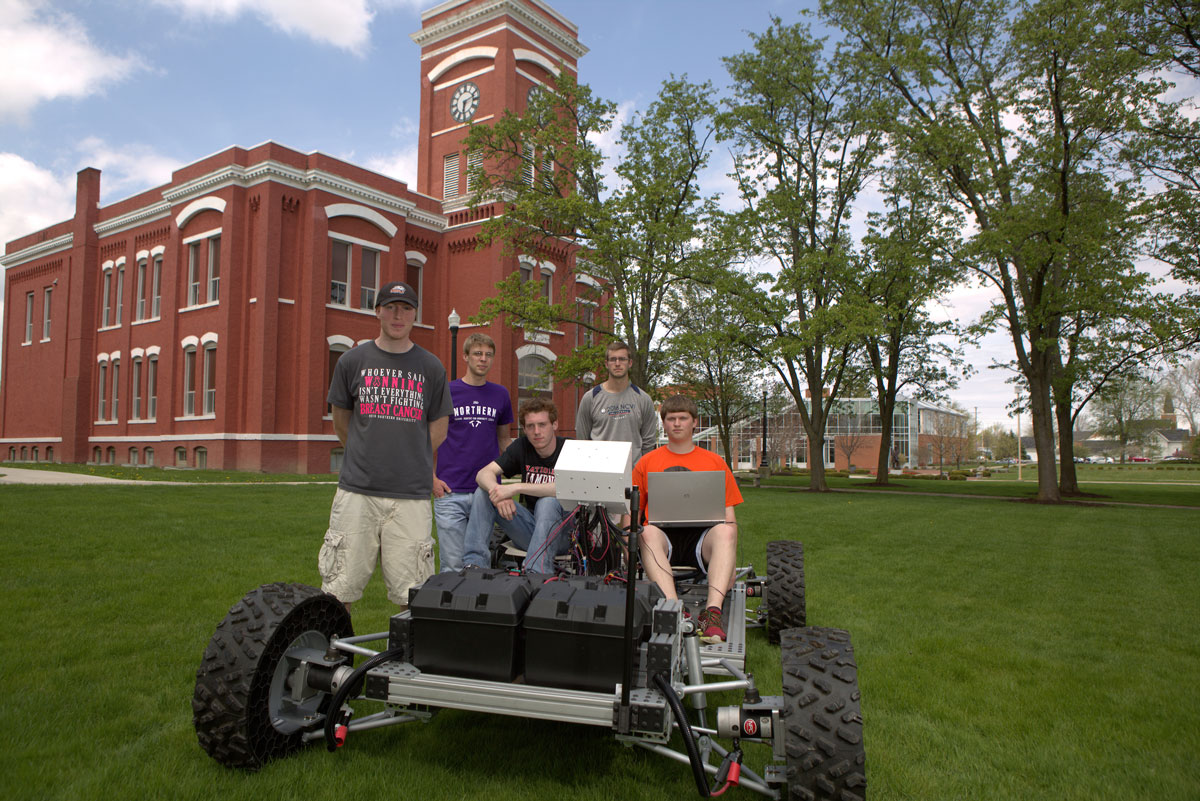 In the years that followed Neil Armstrong’s historic first step onto the moon, the National Aeronautics and Space Administration (NASA) understood that, in order to maximize the value of their astronauts’ brief time on the lunar surface, they would need to expand their effective range.

In the early 1970s, the Boeing Corporation began building lunar roving vehicles (LRVs), to help astronauts explore more territory. The first LRV, or “moon buggy” as it was affectionately called, was launched with the Apollo 15 mission on July 26, 1971. Subsequent LRVs accompanied both the Apollo 16 and 17 lunar missions, but a fourth was scrapped for spare parts after the cancelation of the Apollo 18 mission. The LRVs that made it to the moon were left there, meaning that the only LRVs currently on Earth are prototypes, test vehicles and a handful of replicas on display in museums around the United States. Now, thanks to a group of Ohio Northern University engineering students, one of those museum replicas is right here in Ohio.

A short 30 miles away from ONU’s campus, in nearby Wapakoneta, Ohio, resides a museum named after the man synonymous with the moon – the Armstrong Air & Space Museum. Though Neil Armstrong did not participate in any of the missions that utilized an LRV, the museum named in his honor celebrates all things moon. Visitors can view Armstrong’s spacesuit from the Apollo 11 mission and an actual moon rock. But it was only recently that the museum could boast owning a replica LRV. And it has ONU students to thank for it.

In 2012, the College of Engineering began the Engineering Projects in Community Service (EPICS) program to give students a new kind of educational experience. EPICS projects are engineering solutions that benefit a nonprofit community service or education organization in the areas of human services, access and abilities, education and outreach, or the environment. They are more than just class projects. In the end, students are expected to deliver a tangible product to their client.

Previously, the College of Engineering has delivered cannon bases for two Civil War-era cannons in Forest, Ohio; a new website for the village of Ada; and a display pedestal for the only church bell to survive the fire-ravaged Ada First United Methodist Church. To date, all six majors offered by the college – mechanical, electrical, civil and computer engineering; computer science; and engineering education – have contributed to EPICS projects.

A few years ago, students created “Curio,” a quarter-scale, working replica of NASA’s Mars rover Curiosity for the Armstrong Air & Space Museum. From the success of that project, the LRV idea was born.

“Following the completion of the Curiosity replica, Dean [Eric] Baumgartner asked if we had ideas for the next project for EPICS,” says Chris Burton, executive director of the Armstrong Air & Space Museum. “I met with him and several students and pitched a handful of ideas, none with great confidence. My last proposal, to build a driving, full-scale lunar rover, seemed far beyond the scope for these students, but I shared it aloud since none of the other proposals seemed to fit the bill. The students lit up at the prospect.”

In Burton’s mind, the project needed to be realistic, pose a sufficient challenge and engage several types of engineering students. A full-scale LRV replica would provide all those things to be sure, but would the challenge be too great? The Curiosity rover, which is only the size of a golf cart to begin with, was replicated at one-quarter scale. The LRV was the size of roadster, and there would be no scaling it down. It would have to be full size.

It took two weeks to run the numbers to see if Burton’s idea was feasible. Baumgartner called him with conditionally good news. Yes, ONU would build the museum an LRV, but it would take longer than one year. In Baumgartner’s mind, extending the timeline was the only way full-time students could take on such an ambitious project.

Twenty-three students worked on the LRV replica, contributing more than 3,000 combined hours of their time. The project spanned six consecutive semesters and involved students in mechanical, electrical, computer and civil engineering as well as the college’s new engineering education major.

“It was a big undertaking. The scope of the project is so large, and none of us had really ever worked on cars before, so from that standpoint, it was difficult to even know where to begin,” says Alec Flemming, BSME ’16.

The team members launched themselves into research mode, reading everything they could find on the history of the LRV program as well as any technical documentation they could find. They quickly realized that building something so large would not only be difficult, but also require some changes to the design. After all, the LRV was designed to operate on the moon, where the gravity is one-sixth that of Earth.

“The most noticeable design difference are the wheels,” says Flemming. “When NASA was doing their initial research into what kind of tire would work on the lunar surface, they ruled out rubber because the temperatures are so extreme on the moon. Therefore, the actual LRVs had tires constructed from wire frame and titanium tread strips. Our rover is going to be used in parades here on Earth, so we decided to use rubber tires that would hold up.”

While some design changes were unavoidable, certain key characteristics of the actual LRV had to be present for the design team to call its creation an actual LRV replica. The LRV featured four-wheel drive from four electric motors mounted at each of the rover’s four wheels, and it had four-wheel steering. The students needed to design systems to do both in a way that would work together. Other components were closely modeled after the original LRV due in large part to a LRV technical manual the students were able to find online.

“We were able to model a lot of details from the manual. It broke down every subsystem from suspension, steering and the communication components, to even the aesthetic elements,” says Kurt Meyer, BSME ’16.

After two years of working on the project under the EPICS umbrella, some of the students began to worry that they wouldn’t finish the rover before graduating. Knowing that their senior years would be even busier with their senior capstone projects looming, the students did what engineers do and found an elegant solution to their time problem.

Their solution was to break the rover project up into two smaller projects that would qualify as senior capstone projects. Once approved by the college, two teams would work on two vital subsystems in the rover’s design: suspension and steering. For Meyer, this accommodation by the college was indicative of his overall experience at ONU.

“The school has always been really supportive of us,” he says. “Anything we need, any time of day, the faculty and staff are there to help. They’ll help you design. They’ll help you build. Whatever you need to make your design work, they’ll do.”

ONU delivered the LRV replica to the Armstrong Air & Space Museum on “Astronaut Day,” May 5. It cost an estimated $19,000 to build, with funds and materials provided by ONU’s Archer Memorial Fund, the Ohio Space Grant Consortium and Polaris Industries. The rover seats two, can travel at 10 miles per hour, and includes authentic accessories like an antenna and tool storage. It also includes a decidedly “ONU” design element not found on the original LRVs — the signatures of the students who worked on the project. The museum plans to use the vehicle for rover outreach engagements, for special events and to participate in parades.

Flemming, who was inspired to study engineering after reading former NASA engineer Homer Hickman’s acclaimed memoir Rocket Boys, hopes that the rover can inspire a new generation of children.

“Kids might not understand the whole process that went into building the rover, but I hope they learn a little bit about the engineering side and maybe be inspired a bit by the product itself, and say ‘When I grow up, maybe I can build something like this,’” he says.

It would be a fitting outcome. The Apollo missions inspired a generation of Americans to believe in the greatness of human potential. In the 40 years since that last mission to the moon, space exploration has reached farther into the depths of our solar system, yet with far less fanfare. Six hundred million people watched Neil Armstrong make his giant leap for mankind. In 2012, when NASA landed the Curiosity rover on the surface of Mars in what has proven to be the most spectacular success since the moon missions, it wasn’t even covered live on television.

Perhaps space exploration needs astronauts in moon buggies to recapture our imaginations. Maybe we need to be reminded that we are capable of seeing ourselves stand on a brave new world. When visitors to the Armstrong Air & Space Museum see the rover, or watch it drive past them in a parade, they will be able to place themselves once again among the stars. And the children, after learning that students were the ones who built it, will have new heroes to emulate.