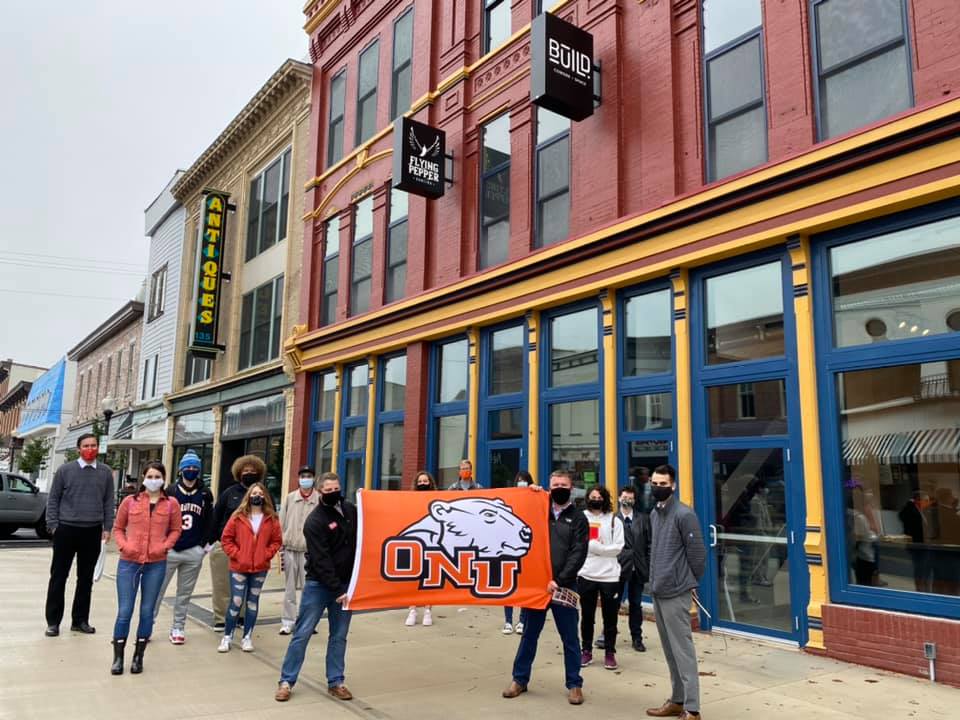 When you think of studying history, you may think of poring through textbooks and memorizing important dates, but to some, it’s more aptly depicted in the traces of the past that have remained to this day. History is certainly not dead, and in the small town of Bellefontaine, Ohio, it has never been more alive.

For the past few decades, the decline of many of our country’s towns and villages has caused much concern over the future of small-town America. The rise of big-box stores like Walmart and Target has been detrimental to many small businesses. But in Bellefontaine, a growing movement led by ONU alumni is out to prove that small-town America can make a comeback.

Based in Bellefontaine, Small Nation is a real estate development company that has invested in the historic beauty of its home in creative ways in order to attract and retain small businesses and small-town entrepreneurs. The organization was founded by ONU alumnus and trustee Jason Duff, BSBA ‘05, and in the nine years since its founding, Small Nation has renovated 14 abandoned buildings, and attracted or launched over 30 new small businesses.

The striking success of Small Nation recently caught the attention of Dr. David Strittmatter, assistant professor of history and Bellefontaine resident. He’s both intrigued and inspired by the small town’s comeback, so much so that he decided to make downtown Bellefontaine a field trip destination for students in his Public History course.

“I was just thinking outside the box because public history is all about how regular people engage with history,” he says. “This is very much a living history museum. People live and work and shop and dine in downtown Bellefontaine. History is just all around them.”

The field trip consisted of a walking tour of the downtown, lunch at the Iron City Sports Bar, and introductions to several small businesses and their owners. The group also met with Duff, Zach Weber, BS ‘05, Matt Staugler and Matt Brown, BSBA ‘05, to learn about their journey in building Small Nation. Brown even gifted a special memento to each of the visiting students – an original McIntosh Center Dining Hall serving tray, which he’d bought years ago at an auction.

“We absolutely love meeting with current students, offering them some perspective from our experiences since graduating,” says Brown. “We were able to share stories about our careers, and the challenges we’ve worked through over the years in developing downtown Bellefontaine and breathing life back into the small business community.”

For the students, the trip was both enjoyable and engaging – an unusual but welcome change from the norm of visiting museums. They took in the beautiful sights of the historic architecture, and they were able to witness firsthand how the revitalization of small towns is more than possible.

“My most significant takeaway from the field trip was that it's not too late for small towns,” says junior history major Brianna Brown. “I've seen so many places similar to Bellefontaine that have just been essentially abandoned, and it showed me that there is still much hope for those types of places.”

For some, it even inspired them to consider new career possibilities.

“This trip has sparked an interest and appreciation for historical buildings, as well as small-town businesses, that I did not have previously,” says senior mechanical engineering major Jared Fox. “It has also opened my mind up to the possibility of working towards owning a business of my own one day or working in a sort of real-estate environment to help better a community.”

Overall, the field trip served as an encouragement to both students and alumni, and helped instill a sense of responsibility in younger generations. As Brown puts it, “This generation of college graduates has a unique opportunity to invest, support and radically shift the trajectory of small towns across America.”