Ohio Northern University engineering students put the course in coursework at the first annual ONU Robotics Challenge on Friday, Dec. 10, in the lobby of the James Lehr Kennedy Engineering Building. Students in Dr. Ziad Youssfi’s Embedded Real-time Application (ECCS 3351) class battled with wheeled robots that they programmed to follow a course made up of a twisting and turning black line. Two robots from competing teams started on opposite sides of the course and the winner was the first robot to make it back to its starting position, or catch up and bump the other robot from behind. Students remade the course after each round until the bracket-style competition determined its champion.

The course and competition provided students with a hands-on, high-impact learning opportunity to program algorithms for embedded real-time systems, one of the most important and widely used aspects of modern computing. Real-time computing relies on collecting and interpreting data and then responding to that data in a constrained time frame. Advanced applications of embedded real-time systems include the flight controls on SpaceX’s reusable rocket boosters, self-driving cars and even the robot vacuum you might have in your living room. Without this area of computer and electrical engineering, autonomous vehicles simply would not exist.

“I decided to include robotics in ECCS 3351 for the first time this semester. This inclusion not only gave the students more concrete examples for embedded systems, but it also allowed them to have a hands-on and fun experience. As students learned more advanced topics in the lab, it was natural for me to think of giving them a challenge at the end to celebrate their accomplishments,” said Youssfi. “The atrium of the new JLK Engineering Building provided a perfect setting for the Challenge, with onlookers watching from the upper floors. When the students and I started cheering for the robots, I knew we had succeeded.”

The ONU Robotics Challenge posed a far simpler problem than returning a rocket from space–after all, the robot just had to follow a black line on a white surface—but this simplicity allowed students to be creative in their approaches, and the competition aspect forced them to find the best solution of all the available options. The point of this exercise wasn’t just to program a robot that can follow a line around a course, it was to be the best at doing so, and the students took the challenge to heart.

“I talked to a lot of the other teams, and everyone has approached this challenge differently,” said Luke Deweese, a junior electrical engineering major. “Everyone’s solution to the course is different, how they read the lines, how they approach each turn—they all have their own solution.”

Deweese and teammate Dominic Hupp, a junior computer engineering major, relied on trial and error to program a robot that made it all the way to the final match. “All the robots are the same, so it’s really the material that we’ve been taught in class that sets the teams apart and determines what the robot does and how well it does it,” said Hupp.

The robots themselves are essentially just collections of wheels, motors, sensors and microcomputers. They have optical sensors on the bottom and mechanical “bump” sensors along the leading edges. These sensors collect the data that the software loaded on the microcomputer interprets and then send out instructions to the independent motors at each wheel, propelling the robot forward and backward and turning it side to side. A successful robot can detect the black line via the optical sensor underneath and follow along it even as the line turns to the right or left or ceases to exist at all.

“We didn’t know there would be a gap in the [robot] course until a couple days ago,” said senior electrical engineering major Carisa Hoffman. “We’ve been practicing on a circular track, so to have part of the track missing is new, and it’s something unexpected that we had to account for.”

Hoffman’s robot had a novel approach for reorienting itself onto the course after encountering a gap in the line; it would travel in a square-shaped pattern until it found the line again. She factored in the friction of the robot’s wheels on the track surface to provide the slight variability needed to make the square incrementally different with each iteration until the robot found its way back.

“We actually did pretty well. I haven’t taken a programming course since freshman year, so there was a bit of a learning curve for me to compete against the computer engineers here who have a lot more experience with programming.”

Hupp and Deweese’s challenge was deciding how many of the optical sensors to use. The sensors can detect light or dark, so they programmed their sensors to work together to keep their robot on the line. “For a while we tried to use the four middle sensors instead of the two middle sensors, but we determined that that was a poor approach because the line is only so big that we’d never have more than two sensors on the line. With two sensors, if both read ‘dark’ we know we are on the line. If the left one is reading ‘light’ and the right one is reading ‘dark’ we know we are too far off to the left, so we want to turn a bit to the right to get back on the line,” said Hupp.

With the competition being a race at heart, teams also had to consider speed. However, there were decisions to weigh heavily in that regard. Go too fast and your robot might lose the line and have to waste precious seconds finding its way back. Go too slow and you might get caught from behind. Hupp and Deweese opted for variability.

In the end, they finished a respectable second place to the team of junior electrical engineering majors Maylon Conrad and Colton Nanik, but the lessons they learned will propel them forward and keep them—and all the students who participated—on track for rewarding careers in the exciting field of engineering.

ONU engineering students put the course in coursework at the first annual ONU Robotics Challenge on Friday, Dec. 10, in the lobby of the James Lehr Kennedy Engineering Building. Students battled with wheeled robots that they programmed to follow a course made up of a twisting and turning black line. Two robots from competing teams started on opposite sides of the course and the winner was the first robot to make it back to its starting position, or catch up and bump the other robot from behind. Students remade the course after each round until the bracket-style competition determined its champion. 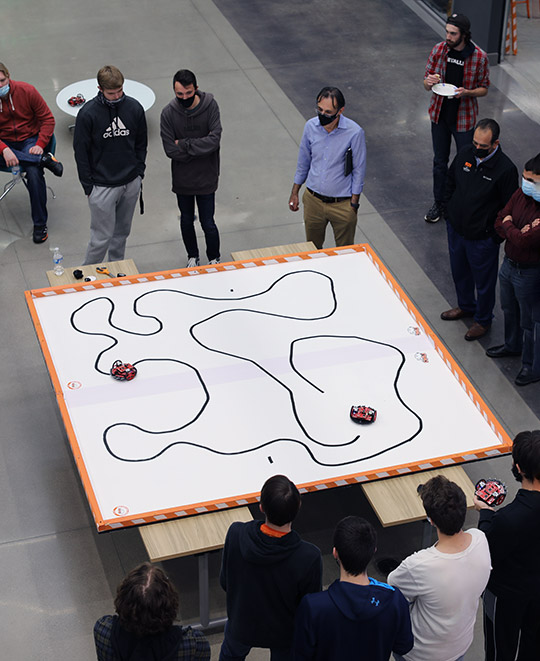 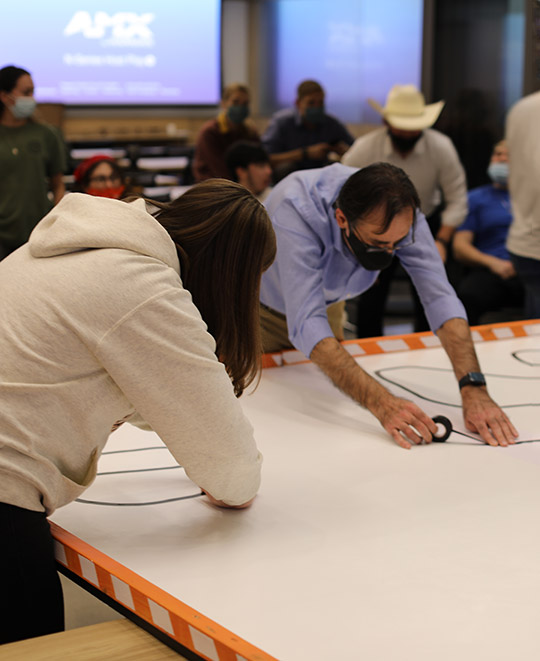 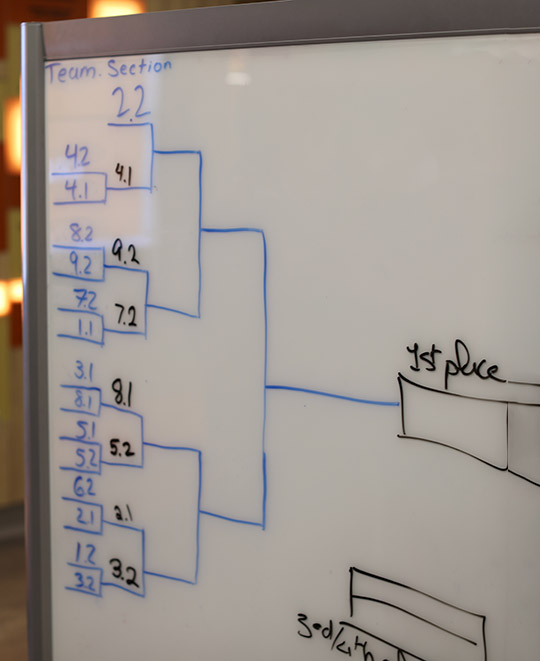 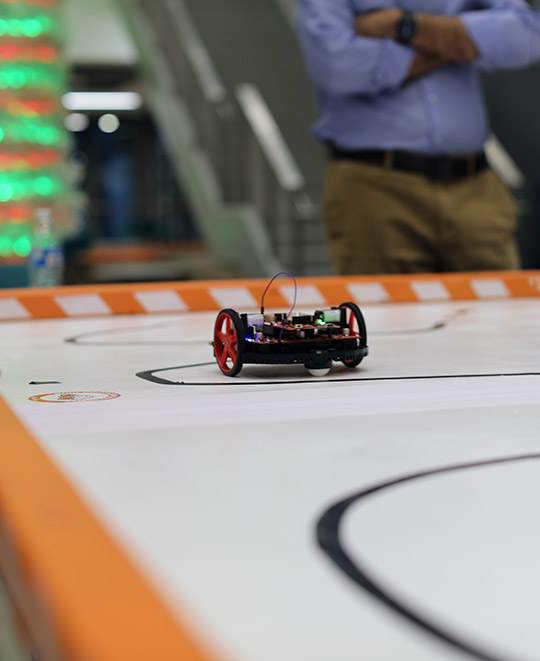 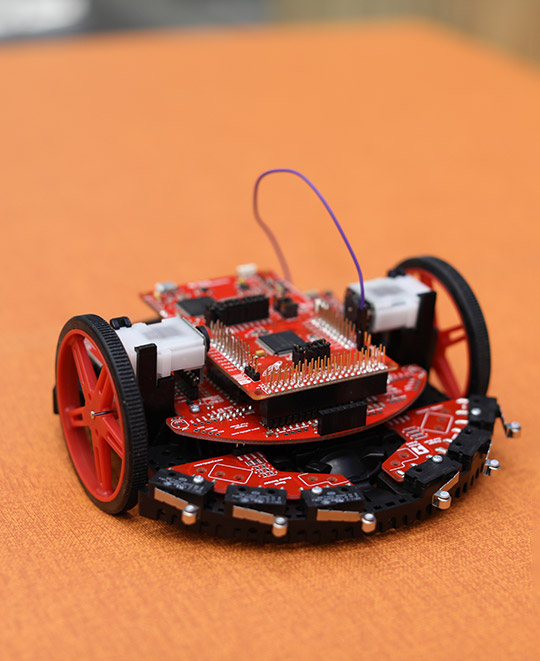 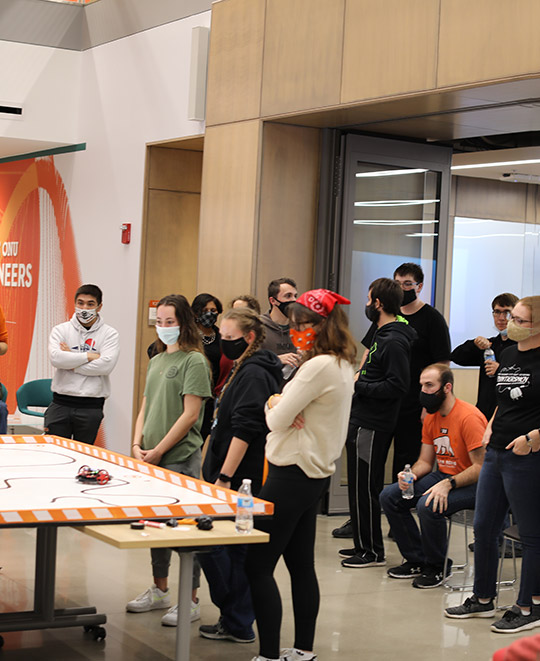 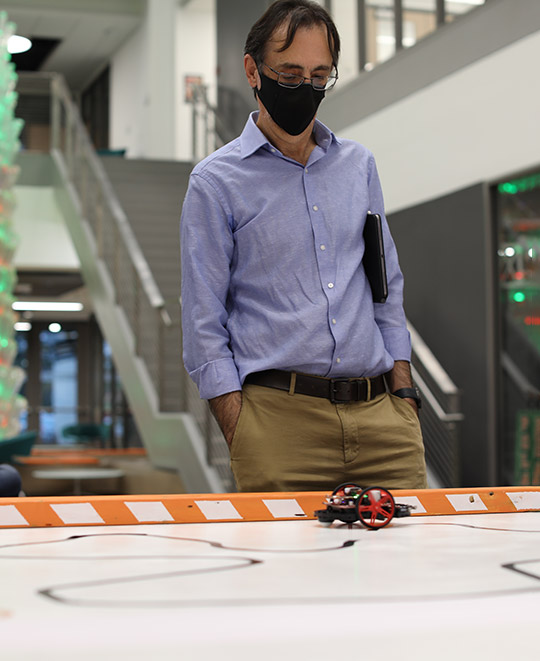 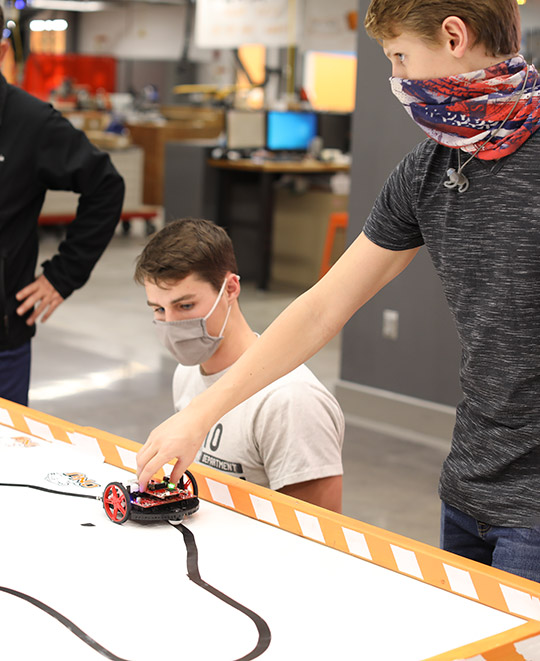 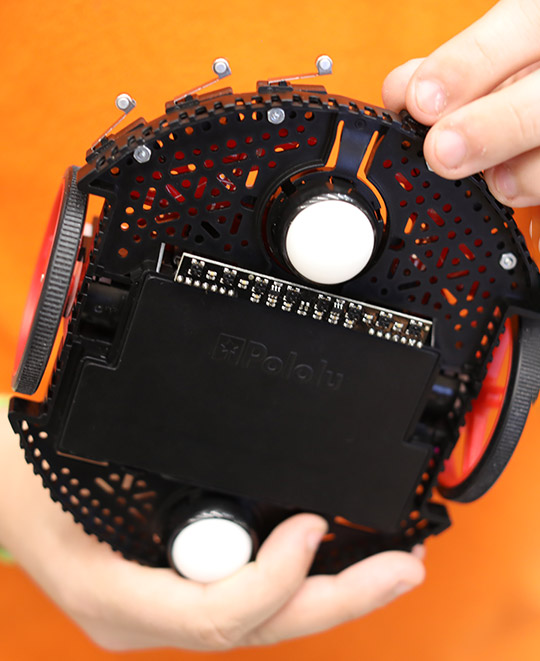