Following delays, the latest launch date had been set for Tuesday, Sept. 27, but Hurricane Ian's approach is impacting plans.

According to NASA, this uncrewed flight test “will provide a foundation for human deep space exploration and demonstrate our commitment and capability to return humans to the Moon and extend beyond.”

ONU connected with four T.J. Smull College of Engineering alumni whose work for NASA has been instrumental to this program:

The European Space Agency contracted with Airbus Defense and Space to build Orion’s ESM, hence the “European” name component. In fact, NASA is partnering with many countries on this program, which ONU alumni point out is an important and essential strategy for space exploration progress to occur.

The ESM itself will support the uncrewed module from launch through separation prior to reentry. This launch will test the structure’s durability for necessities such as in-space propulsion, altitude control, electricity generation and storage, and maintaining a habitable environment for future astronauts.

Moore, who graduated from ONU with a degree in electrical engineering, has worked for NASA for 13 years and on the Artemis program for six years.

Moore’s role has since expanded to include power and thermal integration of the system. During the mission, she will be working in the support rooms and will be Mission Evaluation Room certified.

Withrow, who also earned an electrical engineering degree, has worked for the NASA Glenn Research Center in Cleveland, Ohio for 35 years. His work on Orion has spanned 12 years, but he has worked extensively supporting a variety of NASA missions involving space flight. As Deputy Propulsion Functional Manager, he’s been overseeing the delivery of U.S.-manufactured hardware for installation into the ESM, “which is assembled in Bremen Germany and then shipped to Kennedy Space Center,” he explains. “Specifically, I am responsible for the refurbishment, testing and shipment of the service module’s main engine,” a repurposed Space Shuttle engine that is 40 years old.

Oriti, who earned a mechanical engineering degree, has worked for NASA for almost 16 years. Her primary role in the ESM Integration Office has been the delivery and integration of Orion’s ESM to ensure that it seamlessly integrates with the rest of the Orion vehicle and provides the capabilities required to carry out the Artemis mission.

“Additionally, I was honored to be selected an Artemis I Mission Evaluation Room Manager,” Oriti says. “During the mission, I will be in the Mission Control Center at Johnson Space Center managing a team of Orion experts providing real-time engineering support to the Flight Control Team. I’m most looking forward to the Outbound Powered Flyby where we’ll perform a gravity assisted burn to set us up for lunar orbit and also make our closest pass over the lunar surface at just 60 nautical miles!”

Gartier, who also earned a mechanical engineering degree, has worked for NASA for 31 years and on Orion for Artemis I for more than 12 years. For this mission, she has held positions ranging from Orion Spacecraft Requirements and Integration Manager to ESM Program Lead Engineer. “In addition, for the past year I have been the manager of the CE office at JSC. I participated in the flight readiness review for the Orion spacecraft and approved the certification of flight readiness for Orion,” she says.

Working on a project of this scope and magnitude is serious but exciting business. ONU asked these four how they’re feeling in the leadup to the launch.

“This mission means a great deal to me personally,” says Moore. “I have poured six years of my life into its development. Seeing it in orbit will be a tremendous source of pride. It is also exciting to be a part of history. I will have all the emotions going during the launch and mission.”

Withrow’s reaction is more pragmatic. His job has been to troubleshoot and find solutions. “The propulsion system is considered the most difficult element, with the largest potential for catastrophic failure,” he says. “Yes, we did have failures in testing that were solved” but goals were accomplished, he continues. “I feel that identifying issues and solving those problems was my main goal, potentially preventing the loss of crew.”

Withrow says he’s looking forward to the extensive data that this mission is expected to generate.

Oriti said this mission “is the culmination of childhood dreams and years of hard work.”

“I always wanted to work for NASA and be a contributor to the agency’s exploration of goals, but it was one of those things that felt like an outlandish stretch goal,” Oriti admits. “It was something that was out there to motivate me but I never thought likely to actually happen.” Working at NASA, no matter her roles, has always been “a thrill,” she says. “Every assignment, no matter how big or small, felt vitally important because I work for NASA. I let my career path wander along a long, thrilling, humbling at times journey. The fact that it led me to the Artemis I mission and the opportunity to realize childhood dreams is still a very surreal feeling and something I’m grateful for every day.”

Oriti says she feels a lot of excitement about seeing “this marvelous vehicle get off the ground and on the journey to the moon! I feel a lot of joy in sharing the milestone with colleagues, friends and family. I also feel some general nervousness and vulnerability, because the stakes are high and I care so much about the mission.”

What does the Artemis I mission mean for NASA and even for humanity? The four expounded upon this, too.

“The world, and more specifically the U.S.A., has the ability to put hardware and people in low-earth orbit at a rate much higher than ever,” says Withrow. “For human exploration to move outside of low-earth orbit, this mission is the next step to what will become the future of humans stepping back on the moon, eventually leading to humans going to Mars. The Apollo mission was incredible given the technology of the day. Over 50 years are behind us.”

Oriti echoed Withrow’s sentiments about potential. “Artemis I is opening the door to a future for space exploration that includes sustained human presence at the moon and long-term planning for Mars exploration,” she says. The mission “is just the first of several increasingly complex missions” to reach space exploration goals, she notes.

“One of the things that excites me the most and makes me hopeful for the future of space exploration is that this time as we return to the moon we’re going back together in lockstep with partners across the world. Our exploration goals are too vast and too important to go alone,” Oriti emphasizes.

“Leading design, development, and test of the ESM was the most significant technical and leadership challenge I have faced in my 30+ years at NASA. Collaborating with the team of engineers from NASA, the NASA contractor and our European partners has been extremely rewarding,” says Grantier. “Integrated into these Artemis missions are many scientific payloads investigating the effects of the deep space environment on biological systems, performing reconnaissance of an asteroid, and exploration of the lunar surface. Additionally, this mission is the first test flight of the integrated vehicle that will carry NASA astronauts into space for many years to come.”

Grantier added she is “over the top about the AR1 launch, particularly since it will be the biggest test of any system she has helped lead development on. She expects there will be anomalies; tests have been conducted to contend with those if they happen. “The first achievement for the overall integrated spacecraft will be to get off the launch pad. However, for Orion there will be many major activities throughout the mission where we will be testing out our systems, watching for system anomalies, and be holding our breath,” she says.

The careers of these four alumni appear to be hitting on all cylinders. ONU asked them what advice they have for current students that might help them also reach this level of career fulfillment. All four emphasized bravery, boldness and flexibility as integral professional approaches.

Moore urges students to “not limit themselves because you do not know what the future will hold.” Thinking creatively about career possibilities can take you beyond the stratosphere, she says.

“When I graduated, I did not envision that I would be part of the NASA team. I was open to opportunities that came my way,” says Moore. “I took full advantage of the opportunities that presented themselves. I allowed those opportunities to expand my knowledge base. Many of them pushed me outside of my comfort zone and outside of my field of expertise. Upon being asked to work on Artemis I had never worked propulsion before. There was a huge learning curve. Working with our international partners was another great opportunity to improve not only communication but to expand your way of doing things.”

“My fingerprints are on the upper stage (Centaur) rocket that delivered the Mars Science Laboratory – Curiosity,” Withrow says. “Although the rover successfully landed on Mars in 2012 and continues to provide excellent data, the Centaur rocket that delivered Curiosity was intentionally put on a trajectory to miss Mars, so that Earth organisms would not be introduced to the Martian environment (The Curiosity rover was extensively decontaminated). This Centaur rocket will remain in a sun/Mars orbit that will last millions of years,” he continues.

Withrow’s point with this story? “This one is simple: ONU engineering provides you with a fantastic foundation. From there, you can reach any goal you set, even the stars! If you want your fingerprints on a future NASA mission, that too is possible.”

“There are so many opportunities on the horizon!” Oriti tells students. “Artemis I is truly just the beginning. We need your bright minds, energy and enthusiasm at NASA! We need you in the aerospace industry! The Artemis mission architectures require human landing systems, the Gateway – a lunar orbital platform, lunar surface infrastructure and more. I think there will be a lot of opportunities in the traditional aerospace engineering disciplines but also the less traditional disciplines and sciences. Be flexible in your career path and open to opportunities.”

Grantier says “the sky is the limit” for engineering students. “For me it was important to find a job that I was passionate about the outcome and then learn about as many aspects of the work as I could. Career development is not only becoming an expert in your engineering discipline, but it also involves a solid understanding of the programmatic aspects of executing a project. In addition, engineering is an ever-changing field and continuing to educate yourself on those changes is important to execution of your work,” she concludes.

The scope of the Artemis I mission is illustrated in the physical size of the equipment being used. Pictured here are images ONU alumni provided of the rocket on the launchpad and of a model of the European Service Module. 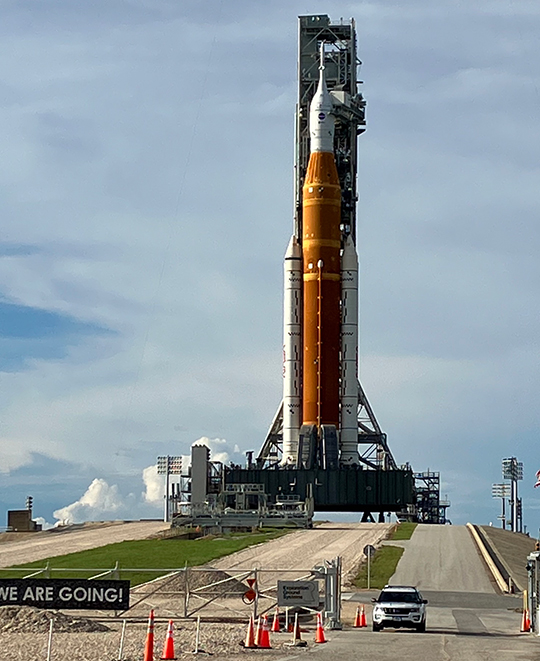 Photo from Julie Grantier of a model of the ESM 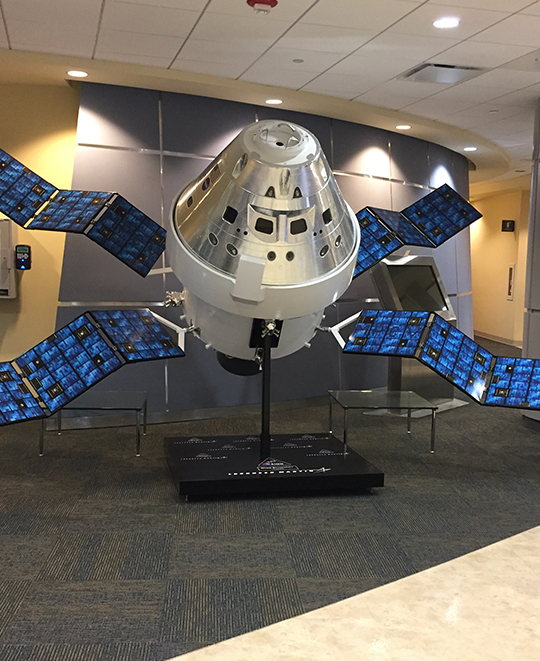 Photo of Linda Moore and her husband 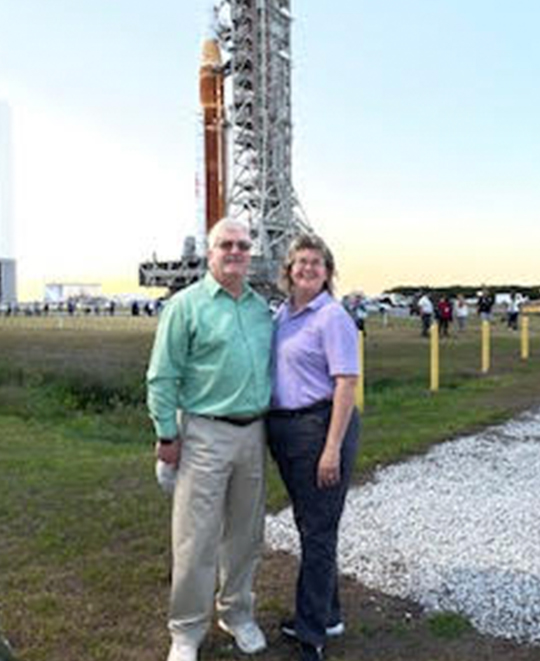 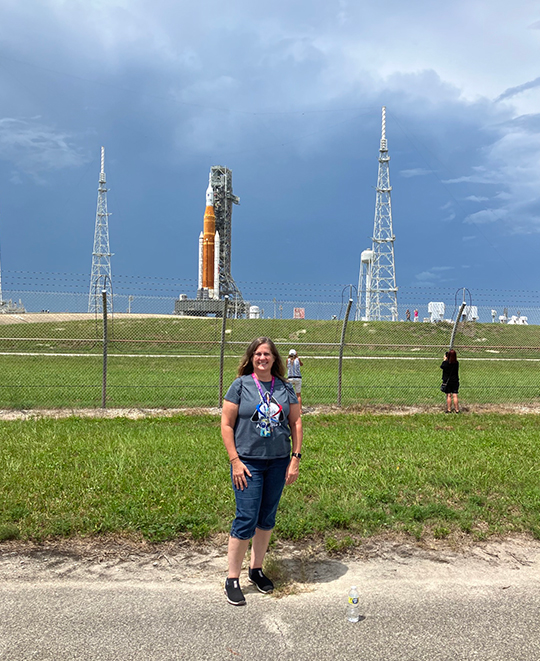 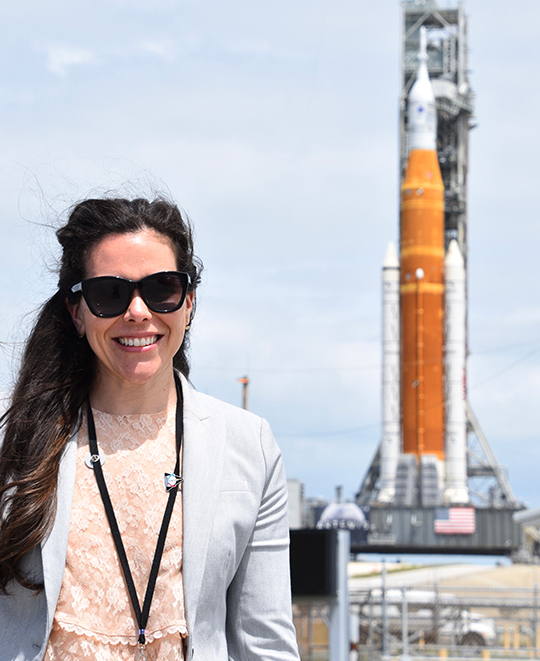