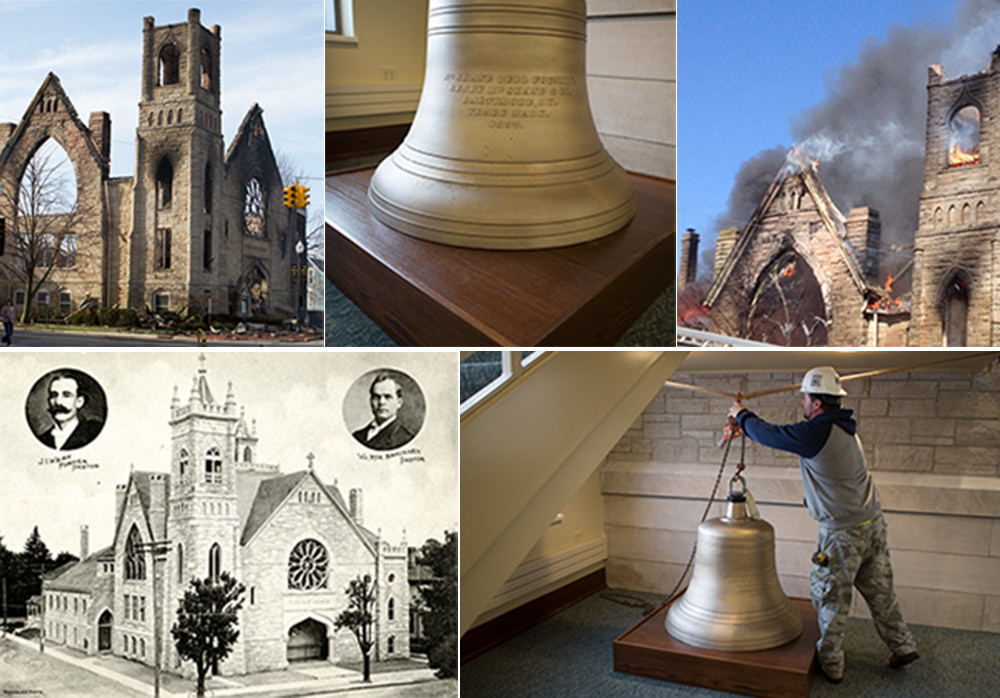 Ohio Northern University’s relationship to the Ada First United Methodist Church dates back more than a century. When a fire claimed the magnificent structure on March 11, 2012, ONU shared the grief with the rest of the Ada community. Now, the University has shared something else with the church – the talent of its engineering students – to honor the old church in the new structure that is being built in its place.

The fire rendered the old church a total loss. The beautiful stained glass windows were gone. The century-old carved woodwork consumed. The altar reduced to ash. Only the 1,300-pound, cast-bronze church bell survived. Yet even it bore scars.

“When the church burned, the bell lost its structural support and crashed down through the fire to the ground and cracked,” says Tom Zechman, assistant dean of the College of Engineering.

The parishioners knew that they needed to save the bell; they just didn’t know exactly what to do with it. So it sat in storage in a local barn until University Chaplain David MacDonald had an idea.

"When David suggested that the church contact the College of Engineering about help with the restoration of our bell, a wonderful process unfolded that has produced a beautiful icon for our new building," says Bob McCurdy, BSPh '65, Hon. D. '96, chair of the church building committee and special assistant to the dean of the College of Pharmacy.

This wonderful process also led to a unique learning opportunity for ONU students in the form of an EPICS project. EPICS stands for engineering projects in community service, and figuring out how to both restore and display the bell at the church would put the civil engineers’ project management skills to the test.

“The project was a combination of preserving an object of history and giving back to the Ada community,” says David Woolley, BSCE '15, then a senior civil engineering major from Gainesville, N.Y. “Plus, there was the project management side of it, such as finding the right companies to work with and coordinating between the different entities involved.”

EPICS projects are like putting a puzzle together while the pieces are moving on their own. There are overlapping workflows, timelines and deadlines to consider, and a successful project hinges on navigating the obstacles you see and avoiding the ones ahead.

To begin, the students contacted Verdin Bell in Cincinnati, Ohio, to repair the bell. The company has been casting and repairing bells for 170 years, and their relative proximity to Ada made them an excellent choice. With the bell repair taken care of, the next step was to determine a method to display the bell. The students first thought about building a stanchion to hold the bell so that it could be rung, but in their structural analysis, Verdin discovered that the bell was too weak to support itself in such a position. The simplest and most elegant proposal was eventually settled upon: The bell would sit on a square pedestal constructed from the same stained white oak lumber that Hoge Lumber, a contractor on the new Ada United Methodist Church project, was using throughout the building.

“The pedestal is the one part of this project that we could get our hands on,” says Zechman. “We designed it, and Hoge Lumber supplied the materials. All we needed to do was build it.”

ONU has a long history of producing well-rounded engineers. Part of the reason for its success is a faculty that possesses not only a tremendous amount of skill and expertise, but also the wisdom to bring in a ringer when the project calls for it.

You might recognize Scott Phillips from television if you are a woodworking aficionado. He is the host of PBS Television’s “The American Woodshop,” an instructional program produced by WGTE in Bowling Green, Ohio, and filmed at Phillips’ woodshop in Piqua, Ohio. On Jan. 29, you might have just assumed he was another engineering professor with the enthusiasm and energy he demonstrated teaching civil engineering woodworking skills and overseeing the construction of the pedestal.

During his visit, Phillips explained his goals and reasoning behind making the trip to Ada: “I’m doing this because this is something that needs to be done, and I really believe that we only have one mission in life, and that’s to make it better,” Phillips says.

At the same time, Phillips saw this as a great opportunity share his woodworking expertise; and if he made one thing abundantly clear to the students, it was the importance of precision and planning. After all, once you start cutting boards and drilling holes, there’s no going back.

While the pedestal was essentially a box constructed from dimensional pine lumber and sheathed in a white oak veneer – a simple design made from simple materials – the detail in every step of the process was exacting. If any student thought that having a measurement off by the thickness of a piece of masking tape wasn’t a big deal before they met Phillips, afterward they knew better.

"Scott Phillips is a master woodworker who has an infinite number of tricks that he taught us as well as how to safely use woodworking tools," says Woolley. "In the end, with Scott's help, we might have built the most perfectly square box out of wood ever."

The finally step was one of delivery. On Feb. 2, 2015, with the pedestal completed and installed inside the new church, the restored bell was lifted and set with assistance from Thomas & Marker Construction. The restored bell occupies a central place in the church entry lounge, right next to the 1898 cornerstone.

“My biggest reward in doing this project was just helping out a community that needed it and seeing how pleased and grateful the congregation was to see the finished product,” says Mitchell Schulze, BSCE '15, then a senior civil engineering major from McClure, Ohio.

And because so many members of this grateful congregation had familiar faces, this particular EPICS project was made all the more special. “The fact that we have ONU students, alumni and ONU engineering faculty as part of our worshiping family made this bell restoration project an ideal part of helping us to remember our heritage,” says McCurdy.

At the conclusion of a project well done, Phillips marveled at the quality, caliber and charity of the young ONU engineers.

“I’ve been following the engineering program at ONU, and they have a really great hands-on group of engineers. These students are salt of the Earth. They’re here to learn. They’re open-minded, creative and enthusiastic,” says Phillips. “As I travel the country, there are areas where that shines. And I challenge all the rest of the places to try and match the enthusiasm and professionalism that is here at Ohio Northern University.”