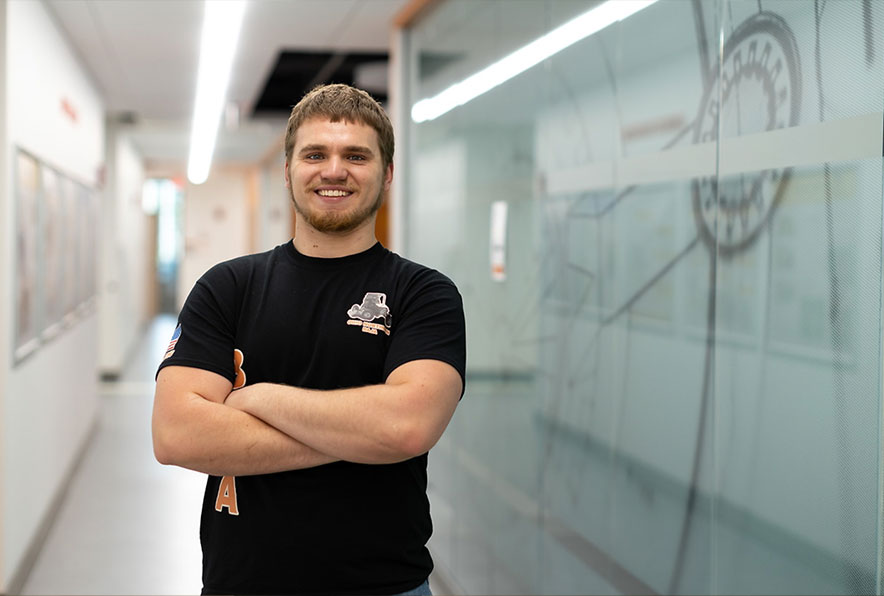 Ohio Northern University junior Bret Lane, a mechanical engineering student with a minor in applied mathematics, has been selected as a 2021 Goldwater Scholar.

Lane, of Frankfort, Ohio, is one of 410 college students across the United States selected by the federally endowed Barry Goldwater Scholarship and Excellence in Education Foundation to receive this premier undergraduate award that honors outstanding academic work in the fields of mathematics, the natural sciences and engineering.

This year’s awardees were selected through a partnership with the Department of Defense and the National Defense Education Programs (NDEP).

“As it is vitally important that the nation ensures that it has the scientific talent it needs to maintain its global competitiveness and security, we saw partnership with the Goldwater Foundation as a way to help ensure the U.S. is developing this talent,” said Dr. Jagadeesh Pamulapati, NDEP program director.

The Foundation, named after the late U.S. senator and military veteran Barry Goldwater, has awarded a total of 9,457 scholarships since 1989. This year, more than 5,000 sophomores and juniors were nominated by 438 academic institutions. Many of the scholars have published their research in leading professional journals, have presented their work at professional society conferences and have garnered the attention of prestigious post-graduate fellowship programs.

“What Bret has in common with his fellow nominees and previous ONU Goldwater Scholars is an exemplary academic record and impressive record of research,” says Christopher Bowers, Ph.D., professor of chemistry.

Lane has completed courses in areas such as fluid dynamics, strengths of materials and mechanical design, and is intending to enroll in more advanced studies that include finite element analysis, computational fluid dynamics, advanced thermodynamics and aircraft design.

His research with Hui Shen, Ph.D., professor of mechanical engineering, focused on the vestibular system’s role in motion sickness. His literature exploration informed the direction of the team’s investigation, which was to determine the effects of size changes to sensory organs during stresses.

Lane hopes to earn a Ph.D. in aerospace engineering, conduct research in propulsion technologies and perhaps teach at the university level.

“The prospect of guiding others who are interested in engineering as a college professor while simultaneously researching in the field that excites me has been a very alluring path to me since I started my own college career,” Lane wrote in his Goldwater Scholar application.

His mentors include Drs. Shen and Jed Marquart, professor of mechanical engineering.