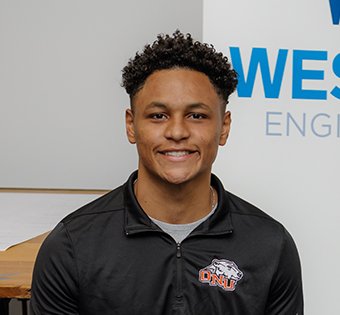 This Brazilian student dreamed of studying in the U.S., and scholarships made it possible

At Ohio Northern University, mechanical engineering student Vini Viera de Souza is building the life he dreamed about when he was a small boy growing up in an impoverished neighborhood in San Paulo, Brazil.

Vini’s ONU education was made possible, in part, by scholarships, including the Yousef K. Shuhaibar Scholarship for International Students. Dr. Shuhaibar, BSCE ’64, a prominent engineer, businessman and consultant in his homeland of Kuwait, established this fund in 1995. Dr. Shuhaibar also served on the ONU board of trustees from 1997 until his death in 1998.

Vini grew up in a “favela” in San Paulo, the fourth most populous city in the world. His mother worked long hours as a housekeeper and sacrificed her own needs to provide food and necessities for Vini and his two older brothers. Growing up, Vini attended school from 7 p.m. until midnight so that he could work during the day

U.S. television shows offered Vini a tantalizing glimpse of another life. He often wondered: What would it be like to experience these things? His speculation morphed into a determination to travel abroad.

“I told myself that it’s going to be hard, but that doesn’t mean I can’t do it,” he says. “And the minute I made the decision to do it, is the minute I started learning.”

And learn he did, navigating the complex process of becoming a high school international exchange student all on his own. To obtain the funds he needed, he saved 90 percent of the income from his job. But it still wasn’t enough, so he turned to crowdfunding. To get buy-in from strangers for his dream of studying in the U.S., he brainstormed a plan. For every donation he received, he would offer something in return—a handwritten note; a picture of him next to Lake Erie when he arrived in the U.S.; a blood donation; an hour spent playing with children in a local orphanage. His idea worked. Over 1,000 people donated to help him come to the U.S., and he repaid each donor with a gesture of goodwill.

Vini ended up at Spencerville High School in Northwest Ohio where for the first time in his life he got to ride a school bus and participate in organized sports. Loving every minute of his U.S. experience, Vini enrolled at ONU.

“I knew I wanted to become an engineer because I’ve always loved solving problems,” says Vini. “When I visited ONU, I was so impressed with the school and community and knew it was the right place for me.”

At ONU, everyone he’s encountered, from professors to coaches to peers, are dedicated to helping him grow in knowledge and skills, he says.

“The engineering program is awesome. I thought that being a foreign student would make things a bit different, but everyone treats me so well and they are very interested in learning from me about how things are done in Brazil.”

Set to graduate in May 2023, Vini’s biggest hope is for his mom to be able to travel to the U.S. and attend his commencement ceremony. Eventually, he’ll have to decide if he will return to Brazil immediately after graduation or stay in the U.S. for up to three years on a work visa. But whatever path he takes, Vini has a bright future ahead of him.