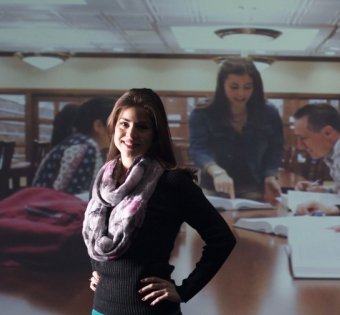 Hercilia Carrion's experience exactly embodies the very essence of ONU's first broadcast television commercial, "The Unexpected," because her participation was totally coincidental. In the video, she appears enthusiastically pointing at a book during a group-study session.

When she was studying in the library the day of the filming, hitting the books was primarily what was on Carrion’s mind – not being in a commercial. The crew initially asked her to move so they could shoot the scene but then decided to ask her to participate.

“I was studying at the moment, and I was not expecting it at all, so it was a nice little surprise. It was fun, definitely,” she says.

Carrion feels it was comical that the scene required her to “pretend that I was talking about the law,” since she was actually doing just that when the filmmakers asked her to be a part of the shoot.

Carrion thinks the video brings a lot to the table for viewers and depicts the vast land of opportunity that is Ohio Northern University.