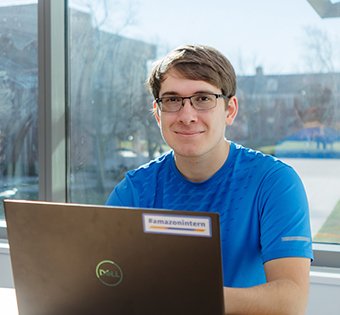 Coursework and five internships are preparing this future software engineer

Daniel Siatkosky wants to follow in the footsteps of his dad and become a software engineer. At ONU, five internships, a diverse curriculum and student organizations are preparing him to stand out in the field.

Possessing a keen mind for problem solving and process, Daniel is a double major in computer science and data analytics with a minor in applied math.

“Math and exploring nature are my two biggest passions unrelated to my majors,” he says. So he’s also taken “a ton of cool math courses” and a field course for biologists.

“A Number Theory course covered division from a perspective I never could have imagined, but it showed me just how fantastic math can be,” he says.

At ONU, he adds, three things stand out for him: the faculty, his fellow students and the academics.

“The professors are all incredibly friendly and knowledgeable in their respective fields. The other students are also friendly and willing to help you. Lastly, the education is very solid,” he says.

Daniel participates in several student organizations, including the Institute of Electrical and Electronics Engineers (IEEE) and the Association for Computer Machining. One of his favorite experiences every year is participating in the hackathon competition, HackOHI/O at the Ohio State University, with his ACM teammates.

He’s glad he settled on a double major and feels well-prepared for the future.

“Whether you want to go into software development, cyber security or research, there’s a professor who can directly help and many others who can provide input on any problem that may come up,” he says.