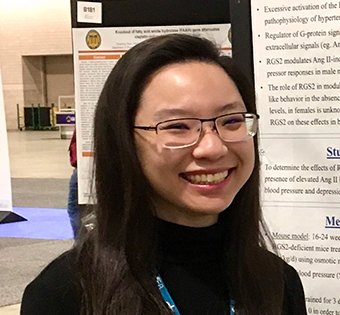 Pharmacy major immerses herself in research, thanks to scholarship support

Pharmacy major Anh Luu has been involved with research since her first year at ONU, and has worked on four different research projects alongside ONU professors. “I’ve realized that asking ‘what if’ and finding out is a pretty exciting process,” she says.

Anh’s research-fueled education was made possible, in part, by two beloved ONU pharmacy educators and administors. These men devoted their careers to advancing ONU and the pharmacy profession and they positively impacted the lives of countless students along the way. Although they are long retired, their legacy of student support continues through the scholarship funds established in their names.

The Thomas A. and Phyllis J. Gossel Scholarship was established in 1991 with gifts from Dr. (BSPH '63, A. Cit. '89) and Mrs. (BSED '63) Gossel for a student in the College of Pharmacy. The McCurdy Fund was established by alumni and friends to honor the retirement and distinguished service of Dr. Robert McCurdy, BSPH ’65, Hon.D. ’96.

Anh says: “I would like to express my gratitude for the generosity of these donors and let them know what a tremendous help it has been to my academic career.”

At Northern, Anh joined Dr. Sophocles Chrissobolis’ research team, where she assisted with studying the effects of the Regulator of G-protein signaling on certain bodily functions and behavior. This study was recently accepted for publication in the Journal of Cardiovascular Pharmacology.

For her second project, she helped design and conduct a study on reaction time in esports competitors, football players and non-competitive peers in response to visual, auditory and tactile simulations. This research resulted in her co-authoring a publication for The Ohio Journal of Science along with her faculty advisors.

Anh says she has learned something unique from each research project. “In a way, the research has made my classes more interesting, now that I see how different and seemingly unrelated concepts connect to each other.” After graduation, she plans to apply to a biomedical or pharmacology graduate program and continue her path in research.