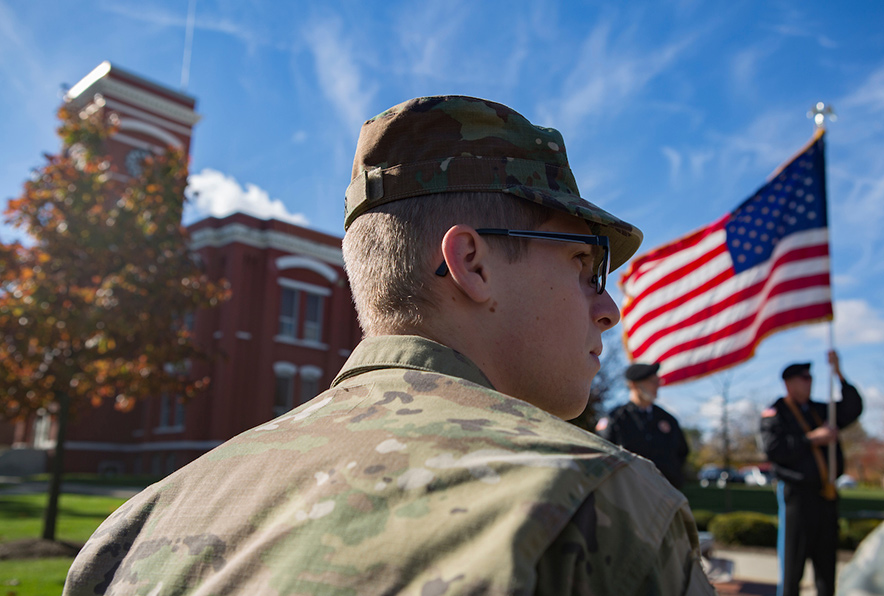 Daus Hempker will deliver remarks during a Veterans Day wreath-laying ceremony at 11 a.m. on Nov. 11 at the Henry Solomon Lehr statue at the front of the Ohio Northern campus. In case of inclement weather, the event will be held in Presser Hall.

Hempker, a U.S. Army veteran, was severely wounded by an IED (improvised explosive device) while on patrol in southern Afghanistan in 2010 and underwent several surgeries and years of arduous, painful rehabilitation. Specialist (Spc.) Hempker served tours in both Iraq and Afghanistan.

During his more than six years of service in Iraq and Afghanistan, he earned the Combat Infantryman Badge and a Purple Heart.

Hempker grew up in Ada and is a graduate of Ada High School. He is engaged to ONU graduate Jessie Alianiello, who earned her bachelor’s degree from ONU in 2018 and has been a great source of support and encouragement for Daus. Hempker is a former student at ONU, pursuing his degree in the major area of philosophy, politics and economics.

The Veterans Day event will also include an invocation by the Rev. David MacDonald, ONU chaplain; performance of the National Anthem by the ONU Chamber Singers; bagpipe performance by the Ada Pipers’ Society/Lion Rampant Band; greetings and laying of memorial wreaths by ONU President Daniel DiBiasio and Ada Mayor David Retterer; a moment of silence; and the playing of taps.