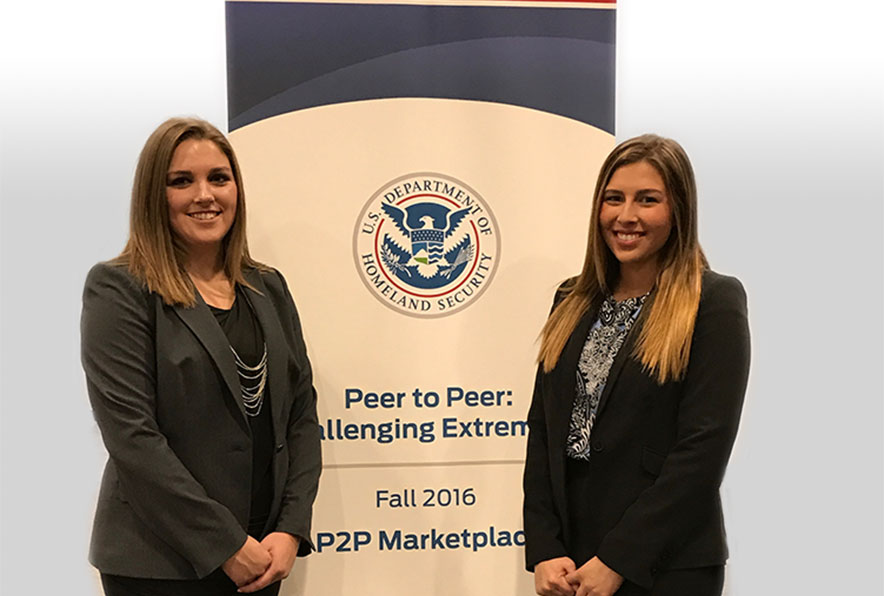 The public relations program at Ohio Northern University won an honorable mention and $500 in the global Peer to Peer (P2P): Challenging Extremism campaign during the 2016-17 academic year. Hosted by EdVenture Partners, Facebook and the U.S. Department of Homeland Security, participants of the P2P program were asked to develop a campaign challenging Islamophobia.

More than 250 schools in six countries contributed to the P2P competition. The U.S. Department of Homeland Security hand-selected honorable mention teams to present their findings in a “marketplace of ideas” to officials from Facebook, the U.S. Department of Homeland Security, members of Congress and others in Washington, D.C. Two ONU P2P members attended, Allie Gellner and Tiffany Kline, as well as the campaign’s faculty advisor, Katherine Fleck, Ph.D.

With a budget of $2,000, and $500 in Facebook ad credit, team members Gellner, Kline, Sam Pontarolo and McKenzie Wilson built a campaign to eliminate common stereotypes and misconceptions about the religion of Islam and the Muslim culture held by students, faculty and staff on ONU’s campus.

The ONU P2P team partnered with the ONU Muslim Student Union (MSU), led by ONU pharmacy professor Yousif Rojeab, Ph.D. The MSU was a vital part of the team’s success. They helped the P2P team craft messages and content for the digital campaign. With the help of the MSU, ONU P2P reached more than 34,000 people on Facebook through photos and videos of MSU members.

The team also created two PSAs for WONB 94.9, wrote one op-ed in The Northern Review, and hosted two events on campus: a speed “faithing” exercise, where participants discussed religion, and a “lunch and learn,” which encouraged open-minded discussion about Muslim culture and Islam. After the campaign concluded, surveys showed that those exposed to the campaign had a more positive view of the Muslim culture and a deeper understanding of Islam.

“Having the opportunity to participate in P2P and travel to D.C. Taught me you can have a big impact, even in a small town,” said team member Kline.

“I never imagined I would be standing in the Hart Senate Office Building presenting to the Department of Homeland Security and members of Congress,” added Gellner. “These are the opportunities that will make me a better professional.”