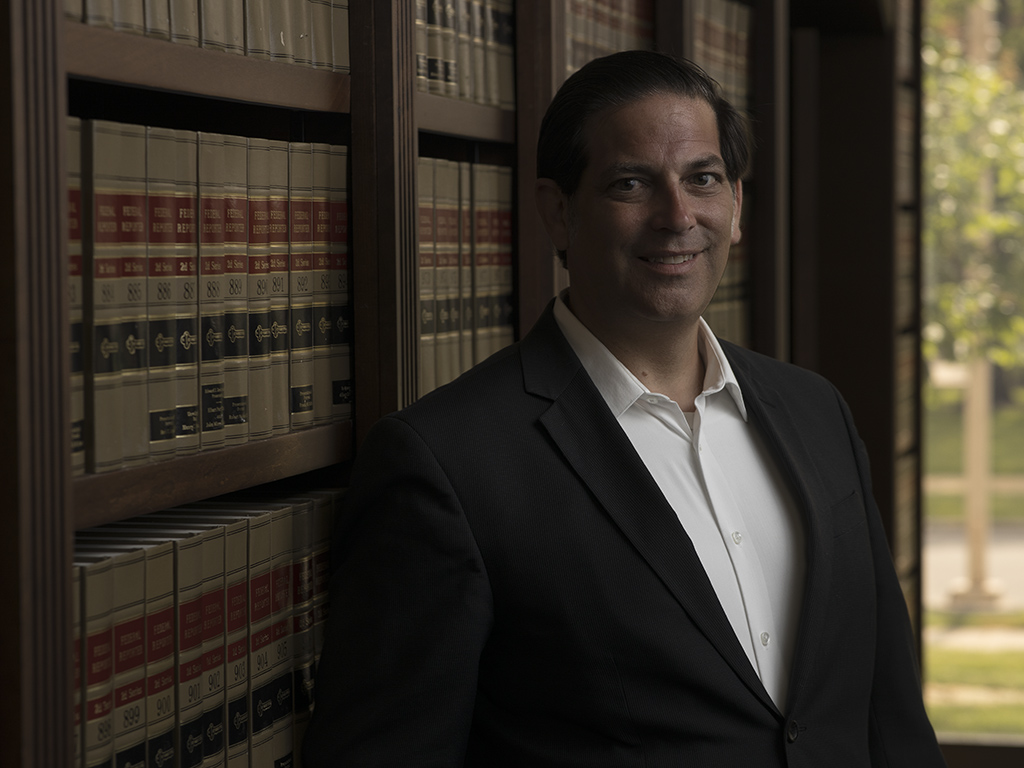 ONU’S NEW INSTITUTE FOR CIVICS AND PUBLIC POLICY (ICAPP) PROMISES TO BE A NATIONAL LEADER.

Dr. Robert Alexander, BA ‘94, has been a national voice on a variety of issues — from the Electoral College to analyzing the 2020 presidential race. His push for improved civic literacy is no secret among the many students he has taught over the years. This past year, Ohio Northern launched the Institute for Civics and Public Policy (ICAPP) and named Alexander as its founding director. Not surprisingly, ICAPP has already made news throughout the world.

The primary goal of ICAPP is to align the diverse strengths of ONU’s academic programs and faculty expertise to give students new opportunities to do meaningful work. Alexander views the institute as a natural extension of ONU’s founder, Henry Solomon Lehr. Lehr envisioned a university where its graduates would take their knowledge, skills and intellect into the world to serve the larger society. ICAPP supports Lehr’s vision through intentional programming and collaboration between faculty and students that will result in increased civic literacy at ONU and throughout the region.

ICAPP is a non-partisan, education-based community of scholars dedicated to conducting high-quality research to support civic literacy and an informed understanding of public policies with a focus on those issues affecting citizens in the industrial Midwest. Although it has been in existence for less than a year, its results have been extraordinary.

Just before COVID-19 brought the United States to a standstill, alumnus Scott Miller, BA ‘77, organized a meeting in Washington, D.C., of key alumni leaders to discuss the potential impact of ICAPP on public policy at the highest levels. As the director, Alexander was able to visit with staff from the offices of U.S. Senators Rob Portman and Sherrod Brown, and a pair of ONU congressional alumni, Mike Turner, BA ‘82, and Tom Reed, JD ‘96, to inform them about the activities of ICAPP.

ONU professors and students aim to aid the policymaking process through rigorous academic research and the development of policy papers. The scholars of ICAPP are recognized leaders in their fields, and their expertise covers a wide range of subjects. ONU students have the opportunity to work alongside ICAPP scholars, benefiting from their expansive knowledge, mentoring and networking connections.

Alexander, for his part, is one of this country’s leading authorities on the Electoral College. He has written two books on the subject and is a sought-after contributor for the national media, including CNN, USAToday and Canada’s CTV. Most recently, Alexander’s research — research compiled over the past 20 years with help from Ohio Northern University students — was used in oral arguments before the United States Supreme Court in a case about so-called faithless electors. It was an impressive high-water mark for an institute still in its infancy, and an indicator of what is possible from ONU scholarship.

In May, the court heard oral arguments in the combined cases of Colorado v. Baca and Chiafalo v. Washington about the individuals who make up the Electoral College and ultimately cast the ballots that decide the U.S. president and vice president. The combined cases involved the constitutionality of binding an elector to their state’s law to vote for the candidate who has the popular will of that state, as some states mandate, or if electors are entitled to free will in casting their ballot. In July, the U.S. Supreme Court ruled unanimously that states have the ability to enforce an elector's pledge in presidential elections.

According to Alexander, the Electoral College is one of the most maligned features in the United States Constitution. There have been nearly 800 efforts to amend or abolish it since inception. Previously, the Supreme Court ruled that parties may require pledges from electors to vote a certain way, but stopped short of requiring electors to honor those pledges. The aforementioned cases addressed this issue.

So why would anyone want to abolish something that has been part of every U.S. presidential election in history? The Electoral College has always been controversial, and results like the 2016 election only deepened divisions among the citizenry. Although Donald Trump was able to secure an Electoral College victory, he did so while losing the popular vote by more than 3 million votes, a phenomenon that has occurred four other times in our nation’s history, resulting in increased interest in the presidential election process each time.

But fairness based on representation isn’t the only quirk that has some people second-guessing the validity of the Electoral College. In his 2012 book, Presidential Electors and the Electoral College: An Examination of Lobbying, Wavering Electors and Campaigns for Faithless Votes, Alexander broke ground by providing the first systematic treatment detailing those who comprise the Electoral College — presidential electors. He found that while most electors dutifully cast their ballots as expected, a significant number of wavering electors consider voting faithlessly. Faithless electors cast ballots counter to their pledged candidate or fail to cast a ballot at all. There have been 165 faithless electors in our history as of the 2016 presidential election. There are no federal laws requiring an elector to pledge their vote to a particular candidate, but 32 states (and the District of Columbia), have laws that do.

Alexander’s expertise is really at the crux of both cases, and it’s no surprise his research was cited. But still, even Alexander wasn’t ready to hear his work argued before the land’s high court and written into American history.

WHEN YOU HEAR YOUR NAME, AND THE WORK OF YOUR STUDENTS, BEFORE THE SUPREME COURT, YOU JUST CAN'T PUT IT INTO WORDS. HONESTLY, I WAS HAVING TEARS OF JOY THROUGHOUT THE DAY, AND IT'S NOT TOO OFTEN THAT YOU CAN HAVE THAT," HE SAYS. "IT WAS A PRETTY REMARKABLE MOMENT CERTAINLY FOR ME, BUT ALSO FOR ALL OF OUR STUDENTS WHO WORKED WITH ME ON THIS PROJECT OVER THE YEARS."

Alexander has already been at the center of the 2020 presidential election through his involvement with the Great Lakes Poll. The collaboration between Ohio Northern University, Baldwin Wallace University and Oakland University gauged the perceptions of Midwesterners on timely issues and concerns in the political and public policy spheres. Directed at registered voters in the states of Ohio, Michigan, Pennsylvania and Wisconsin — all states Trump won in 2016 — the poll was issued three times. In January, the poll served as a primary season preview, while in March and April it focused on the COVID-19 pandemic and the election with April being segmented to just Ohio voters.

The poll contained a base set of questions that were used each time the poll was run. Additional subsets of questions focused on topical issues specific to public policy or politics at large — Trump, the economy, race and gender, immigration, etc. — were added with each subsequent poll.

“We asked six or seven questions about the Electoral College in the inaugural poll in January,” says Alexander. “We asked people to rate their concern over things like the influence of swing states in an election, for example. We asked them questions on how they felt about the ways votes are awarded, whether they preferred winner-take-all or proportional representation — those kinds of things. I was shocked to find majorities of respondents in these swing states would support doing away with the Electoral College in favor of a popular vote.”

The poll was an instant success with major media outlets covering its results. The popular politics website FiveThirtyEight.com featured the poll on its homepage, and USAToday, The New York Times, CNN, ABC News, The National Journal and MSNBC all referenced its findings. With each of these media hits, ONU’s name and reputation grew, which is precisely what Alexander hoped for when he joined the project and made ONU’s involvement the first major initiative for ICAPP.

“Being on the national stage is exciting. ONU is jumping into the ring,” says Alexander. “It is great for our students to be among the first to hear and discuss results of these polls days in advance of what others receive in newspapers, television and radio throughout the nation. It truly makes an Ohio Northern education distinctive among our peers.”

The Great Lakes Poll is actually ONU’s second foray into polling, following the Northern Poll, which Alexander conducted with students in April 2019. That poll made news as well with its findings that Ohio appeared to be competitive in spite of the fact that Donald Trump won the state convincingly in 2016. The poll also predicted Joe Biden would likely have a strong showing in the Democratic primary in Ohio. ONU students, under the tutelage of Alexander, surveyed 1,505 registered Ohio voters with a margin of error of 2.7 percent. They worked with Alexander on the question design and the interpretation of the results. He also offered to show students the process of writing an opinion piece for a newspaper, something he has been quite prolific at in recent years.

The result is that his work with Cassandra Krencisz, BA ‘20, was picked up by Cleveland’s The Plain Dealer — a feat few college-aged students are able to add to their resume. Krencisz has since graduated from ONU and accepted an assistantship to attend Penn State University, pursuing a master’s in — you guessed it — public policy.

ICAPP has already demonstrated that a market exists for its research and scholarship. As they say on election night, “the early returns look good.” Most might say that having one’s work cited before the Supreme Court would be a milestone, but Alexander sees it as a stepping-stone for what ICAPP can eventually become.

“We have amazing students, and we are poised for greatness. I can’t wait to see what the future holds.”

To learn how you can support ICAPP, please contact Ellie Beckwith-McManus, executive director of development for the Getty College of Arts & Sciences and special projects (e-mcmanus.1@onu.edu, 419-772-2073), or Robert Alexander, professor of political science and director of ICAPP
(r-alexander@onu.edu, 419-772-2093). You can also learn more on the ICAPP website https://www.onu.edu/ICAPP.