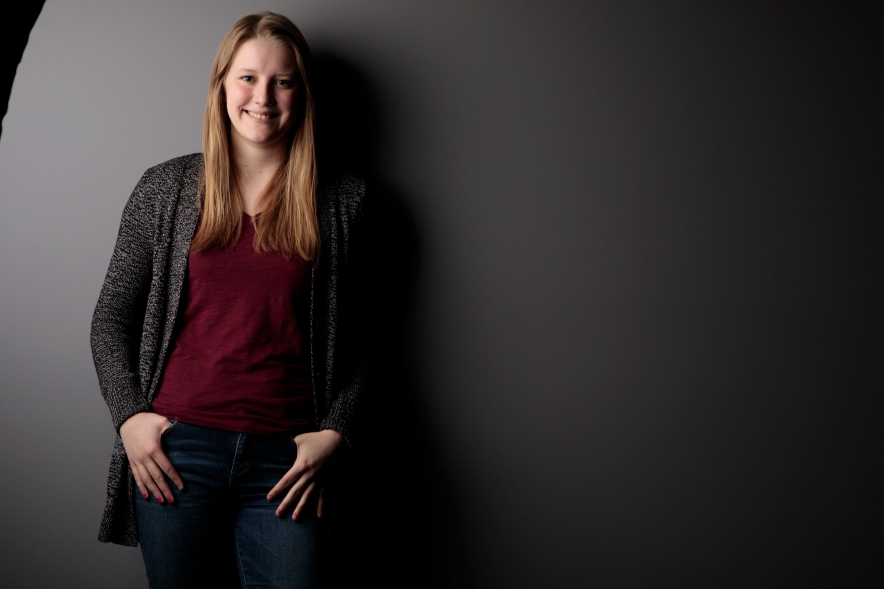 In recognition of her community engagement, Hannah Ray, a junior political science and statistics double major, has been selected as a Newman Civic Fellow. Ray is among 250 students nationwide to earn the one-year fellowship, which is sponsored by Campus Compact, a group working to advance the public purposes of higher education.

In his nomination, ONU President Daniel DiBiasio wrote, “Hannah typifies the qualities embodied in this prestigious award. She shows initiative, drive, intelligence, compassion and a true desire to change the world for the better.”

Ray’s interest and activism in human rights began during her freshman year of college. There were no human rights groups on campus to join, so she helped to create a chapter of Amnesty International at Ohio Northern University (AIONU) through which she has been able to increase the recognition of human rights abuses worldwide and create dialogue between students.

“Hannah is by nature a problem-solver; the problem most urgent to her is the violation of human rights both at home and abroad. In the three years since she co-founded AIONU, its annual Write for Rights campaign has grown tenfold” DiBiasio said.

For Ray, defending human rights is natural. “Who doesn’t support human rights?” she asked when discussing her passion for AIONU. “With my catholic background, I believe everyone is entitled to equality, fairness and love.”

The most rewarding part for Ray is to see other people take action. An event that brought a death-row exoneree to campus is one of her favorite memories. To see the Dicke Forum full of students not only made her event well-attended, but also means students were showing interest in seeing change in the future.

She also gets to see students’ lives change as a senior resident assistant, soon to be resident director. “I have had many great experiences seeing my residents open up, meet new people and make their own journey at Ohio Northern University.”

Hannah has shown great ambition in both her studies and involvement on campus. As a double major, she has received both college and University recognitions. She has been inducted into several honor societies; was the secretary for the ONU Model United Nations team; and is a teaching assistant in the Department of History, Political Science and Geography. Beyond her academic pursuits, she is a member of the Ohio Farm Bureau and Kappa Alpha Theta, and she studied abroad in South Korea. “During my time at Ohio Northern University, I have had the opportunity to grow as a leader and passionately pursue activities that I believe have had a positive impact on my peers and on campus” said Ray.

After graduation, Ray will join AmeriCorps for 12 months and then earn her graduate degree in public administration. Hannah’s long-term plans include working for a federal agency or for a nonprofit for which she will continue to dedicate herself to the betterment of others.

The 2019 Newman Civic Fellows will be provided a variety of learning and networking opportunities through Campus Compact. The fellowship also provides fellows with pathways to exclusive scholarship and post-graduate opportunities.

The Newman Civic Fellowship is supported by the KPMG Foundation and Newman’s Own Foundation.

Ray is the fifth ONU student to win this prestigious honor. Ben Fink was a 2018 recipient, Zachary Bragg was a 2017 recipient, Derek Price was a 2016 recipient, and Amanda Liebrecht was a 2015 winner.