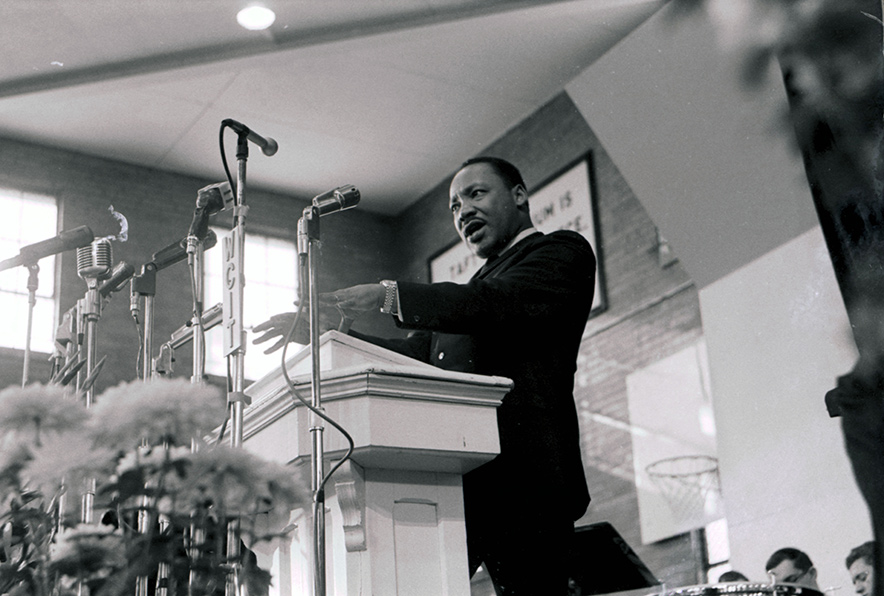 Ohio Northern University will hold a dedication for a statue that depicts Dr. Martin Luther King Jr.’s talk on campus 50 years ago at 10:30 a.m. on April 17 in the area between Taft Hall and the ONU College of Law building.

The event is free and open to the public.

King spoke in Taft Gymnasium on Jan. 11, 1968. It was one of the last speeches he gave at a college or university. According to ONU archivist Paul Logsdon, King spoke at Kansas State University on Jan. 19, 1968, and at Manchester (Ind.) College on Feb. 1. He was assassinated in Memphis, Tenn., on April 4.

The keynote speaker at the April 17 event will be the Rev. Bernard LaFayette Jr., who worked alongside King and has devoted his life to King’s final instructions to him in 1968 to “institutionalize and internationalize nonviolence.” LaFayette was a co-founder of the Student Nonviolent Coordinating Committee (SNCC) in 1960. He was a leader of the Nashville movement lunch counter sit-ins in 1960 and the freedom rides in 1961, and he directed the Alabama voter registration project in Selma in 1962.

Also speaking will be historian Christopher E. Manning, who will provide national context of the time period when King spoke at ONU. Manning is an associate professor of history and assistant provost on academic diversity at Loyola University Chicago.

“Dr. King’s visit was a profound moment in the life of the University, and it is appropriate that we should properly commemorate it,” said ONU President Daniel DiBiasio. “Dr. King exemplified the courage of conviction and the difference one person can make when the cause is right. It is incumbent upon us to carry forward the ideals of inclusiveness, respect for diversity and the acceptance of others that he personified.”

The statue is approximately 6 feet 5 inches tall and weighs more than 700 pounds. McKillop has worked on the piece since July 2017.

“This statue is a statement that the University values this part of our history and that we value Dr. King’s message,” said Adriane Thompson-Bradshaw, vice president of student affairs at ONU. “Fifty years is a significant milestone and, looking back, it is impressive that a person of his stature spoke at ONU, and it shows that we are a part of the national landscape. The placement of the statue also is significant. Not only is it outside of Taft Memorial, where Dr. King spoke, but it is also near Weber Hall, which houses admissions. This makes a statement to campus visitors that we value inclusiveness and what Dr. King stood for.”

The statue depicts King standing behind a podium.

The upcoming ceremony is the last in a series of events to commemorate the historic occasion. A panel discussion, which included students, faculty and staff members who were at the speech, was held in January. There also have been discussions focusing on the past, present and future of King’s mission and the civil rights movement.