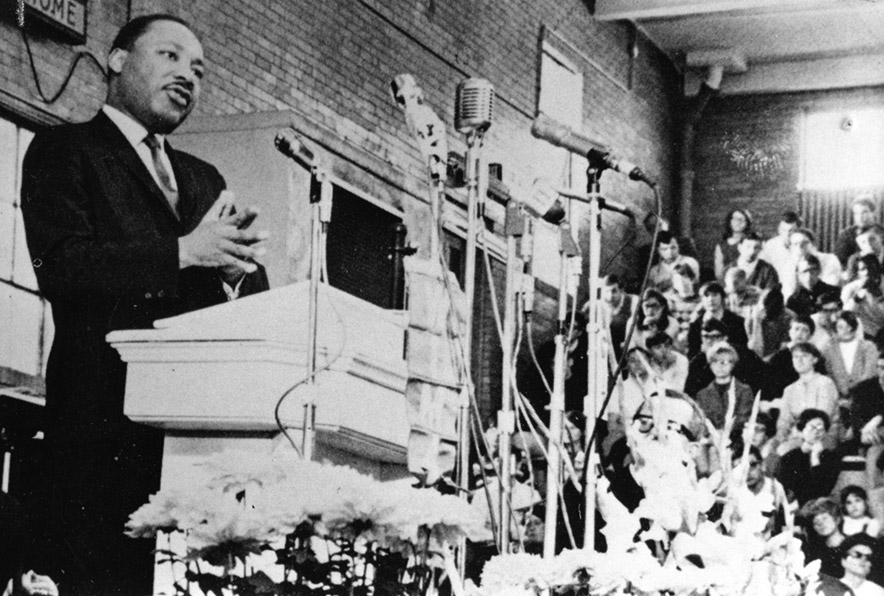 Dr. King’s iconic “The Hammer of Justice” speech, delivered Jan. 11, 1968, on ONU’s campus just three months prior to his assassination, has since served as an institutional touchstone for guidance and action. It now carries additional contemporary relevance, as the following quotes illustrate:

• “You see, a fact is merely the absence of contradiction but truth is the presence of coherence. Truth is the relatedness of facts. Now, it’s a fact that we’ve come a long, long way, but it isn’t the whole truth.”

• “I will still raise my voice against riots and violence because I don’t think it solves the problem. I think it only tends to intensify the fears of the white community while relieving the guilt.”

• “And it may well be that we may have to repent in this generation not merely for the vitriolic words and the violent actions of the bad people, but for the appalling silence and indifference of the good people who sit around and say wait on time. Somewhere we must come to see that human progress never rolls in on the wheels of inevitability.”

The public is invited to a virtual MLK Chapel on Thursday, Jan. 21 at 11 a.m., to be livestreamed on ONU Chapel’s YouTube channel. Bishop Julius Trimble of Indiana Episcopal Area of the United Methodist Church will serve as the guest speaker. His sermon, titled “Restless for Justice,” will launch the Chapel’s spring semester chapel series titled, “Our Hearts are Restless.” According to Rev. David MacDonald, the series will focus on “the many ways our hearts are restless for God in this world” and will introduce individuals from the Christian and interfaith traditions who exemplify this search for spiritual restfulness.

Campus events for students, faculty and staff will include an interactive trivia contest and a book read featuring “Biased: Uncovering the Hidden Prejudice That Shapes What We See, Think, and Do” by Stanford University psychology professor Dr. Jennifer L Eberhardt.

ONU’s Heterick Memorial Library will also host a history display with artifacts that focus on the campus’ bronze MLK, Jr. statue, dedicated in 2018.

Black History Month will feature a multicultural celebration highlighting campus diversity throughout the years. The organizing committee is collecting artifacts for a library display and multimedia presentation. Other plans are being finalized for this February recognition.

ONU is looking forward to these events co-sponsored by the Office of Multicultural Development (OMD) and to continuing to commemorate Dr. King every day of the year with inclusivity.

“Here at Ohio Northern, multiculturalism is the norm. The interconnected nature of each person’s identity is respected,” says Dr. Albertina Walker, the Office of Multicultural Development Center’s interim director who is assisting with event planning for the upcoming commemoration. “We want to create intellectual and physical spaces in which radically different ideologies can be explored as points on an ever-expanding continuum.”

“As a result, we don’t judge ideas for the sake of condemning them,” she continues. “We interrogate them respectively in order to deepen our appreciation of what it means to be human, in all its complexity, just as Dr. King did. We have a united commitment to realizing Dr. King’s legacy by affirming the civil rights of our students and by emphasizing the power of nonviolence to effect lasting change. These core King principles inspire everything we do here, all of us.”

Walker points out that “Because of Dr. King’s legacy and leadership, we do not fear struggle. We expect it, endure it and honor it.”