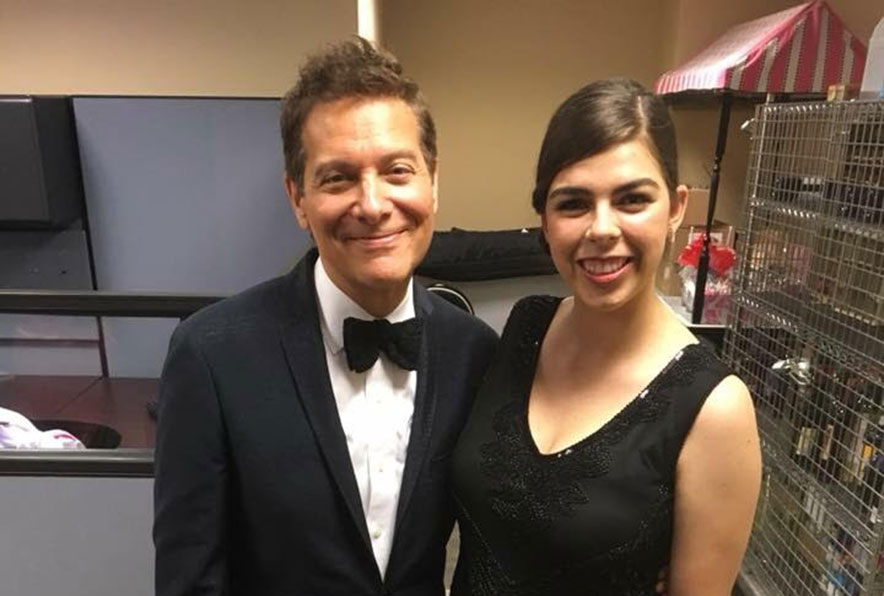 The curtain continues to rise on the musical performance career of Ohio Northern University student Emily Estep. The rising sophomore from Fresno, Calif., recently performed with renowned entertainer Michael Feinstein at “Feinstein’s at the Nikko” in San Francisco.

Estep, 18, earned this opportunity by placing second out of 40 performers and tying for the Songbook Inspiration Award in 2017 at Feinstein’s highly selective Songbook Academy in Carmel, Ind. Feinstein, who has been nominated twice for Emmy Awards and five times for Grammy Awards, is the founder of the Songbook Foundation and corresponding academy. The facility trains selected young, highly talented singers who love the music of classic Broadway shows, jazz and other melodies from the “golden age” of American popular culture.

“Since I have always had a passion for both music performance and the golden age of music, this was an incredible experience,” said Estep, a graduate of University High School who is majoring in musical theatre at ONU.

Estep was selected for the Songbook Academy twice while a high school student, in both 2016 and 2017. Applicants must submit video of themselves performing selections from the Great American Songbook collection. The competition is fierce.

“The first year, I was stunned by the quality of the other performers,” Estep said. “After that initial experience, I was focused the second year on being selected to perform with Michael Feinstein. I chose a piece I really had a connection to, and it all came together.”

Estep’s selection for the competition was “I have Dreamed” from “The King and I” by Rodgers and Hammerstein.

In the music world, this is an accomplishment of particular note.

“This is a really big deal and shows the level of Emily’s ability,” said Kirsten Osbun-Manley, ONU resident artist in music and musical theatre program director. “Some of the top high school students in the nation who go on to attend elite music schools do not rise to Emily’s level at the Songbook competition. Michael Feinstein is an icon in the music industry, and people throughout the industry have been contacting me since they saw this.”

Estep’s musical roots and her preferences for the classics began at an early age. Her mother, Shannah, teaches voice lessons, and her father, Eric, is a middle school drama teacher.

“My parents both have a passion for entertainment, which they passed on to me,” said Estep, who began performing in musicals at the age of 6. “I especially enjoy the popular classics. As a child, my dad would sing jazz standards to me, and it has always been part of my life.”

Traveling across the country to attend college was not easy for Estep, but she was attracted to ONU’s unique educational offerings. “I knew I wanted to major in music theatre, and Ohio Northern offers the whole package. It offers training in the arts and musical theatre, plus its curriculum allows me to go in other directions and explore various interests. For example, I'm considering pursuing a minor in history, and I am able to tie together both music and history.”

“Plus, the faculty really make a difference with the personal touch. They take a genuine interest in the students’ success.”

Estep’s future is bright, and she is keeping an open mind.

“There is a lot out there for me to explore,” she said. “I knew I want to investigate jazz music, but I am uncertain what path to follow. There are a lot of options to pursue, and I am eager to see where they lead me.”