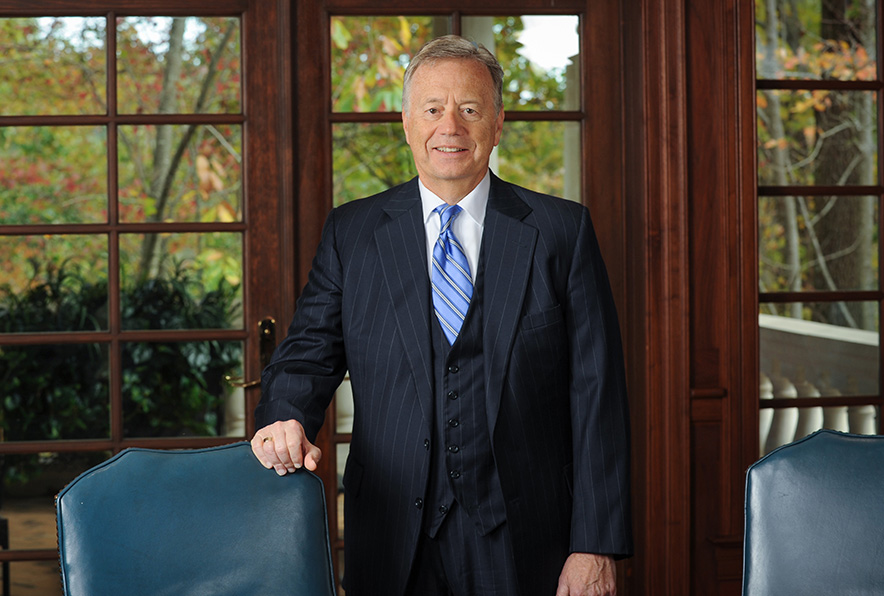 The exceptional educational experience he received as a law student at Ohio Northern University motivated Charleston, W.Va., attorney W. Kent Carper to endow a scholarship fund at his alma mater.

His substantial gift establishes the W. Kent Carper Law Scholarship, which will be awarded to law students during the second semester of their first year in law school. Preference will be given to students from West Virginia, those who work as first responders or in public safety, or those who have family members in those fields.

“I was inspired to create this scholarship fund by my educational experience at Ohio Northern,” Carper said. “In my professional career, I owe everything I have been able to accomplish to ONU. I have competed against attorneys from every Ivy League school you can think of, and I have been able to match up against them, largely due to what I learned at ONU.”

Carper, who earned a juris doctor from ONU in 1979, earned a bachelor’s degree from West Virginia State University.

Carper has warm memories of his time in Ada while he pursued his law degree.

“My wife, Deborah, and I often talk about how our days at ONU were some of the best times of our lives,” he said. “We raised two young children there, and we appreciate that it was a wonderful place to study and raise children. We have very fond memories of our time there.”

Carper has had a distinguished career as an attorney and public servant. He is a founding partner in the Charleston, W.Va., law firm Hill, Peterson, Carper, Bee & Deitzler PLLC. The firm was recently recognized by “The Forum” as one of the top 25 civil plaintiff firms in the United States. The firm represented Mid-Ohio Valley residents who successfully sued DuPont Co. and the spin-off firm Chemours for more than $670 million for claims they were made ill by exposure to the chemical C8.

Further, Carper has been active in his hometown region. He is a long-time Kanawha County commissioner, presently serving as president. Carper also has served as Charleston police chief and director of the Department of Public Safety, assistant prosecuting attorney of Kanawha County, and deputy in the state auditor’s office.

Professionally, he is a member of the Kanawha County and West Virginia bar associations as well as the West Virginia Association for Justice. His area of legal concentration is personal injury litigation.

“I have only left West Virginia twice for any length of time, and that was for military service, primarily in Texas, and to attend law school at Ohio Northern,” said Carper, who served in the West Virginia Air National Guard as an aircraft technician.

His gift to ONU captures Carper’s spirit of service to others.

“The time seemed right to pay it forward and help a future ONU law student from this region,” Carper said. “This is something that is important to me.”

ONU Vice President for Advancement Shannon Spencer said, “This generous gift by Kent Carper exemplifies his passion for making an impact in the lives of others. It will help to ensure that future students from West Virginia can have the same high-quality academic experience that prepared Kent so well for his professional pursuits. We are appreciative of the generosity of Kent and his wife, Deborah, in endowing this scholarship fund.”

Founded in 1871, Ohio Northern is a private university affiliated with the United Methodist Church. It enrolls approximately 3,100 students in its five colleges: Arts & Sciences, Business Administration, Engineering, Pharmacy and Law.