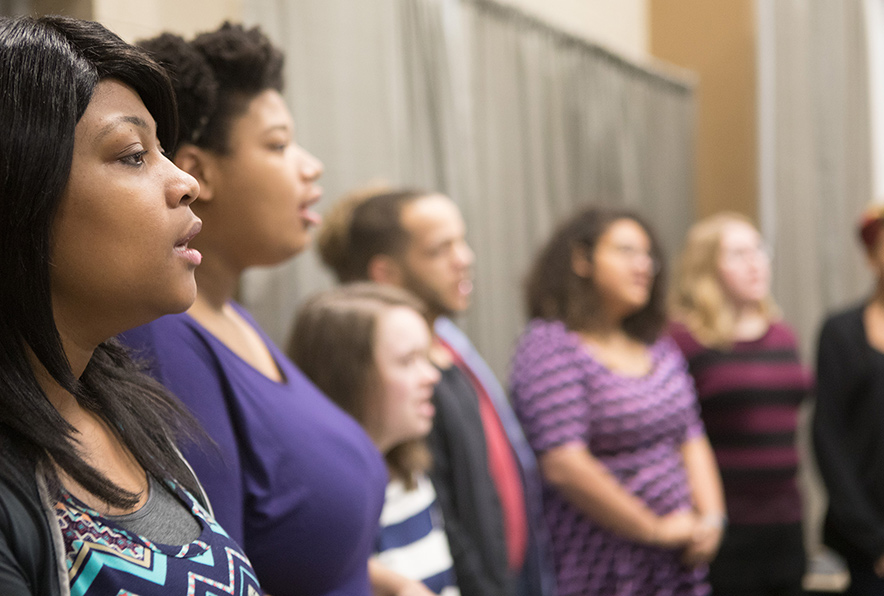 Ohio Northern University’s Gospel Ensemble has proved that diversity and inclusion are themes that stand the test of time. The singing group, which was founded in fall 1987 for a one-time performance, will perform its 30-year anniversary concert at 4 p.m. on April 2 in the McIntosh Center Ballroom. The event is free and open to the public.

“The concert is intended to be a celebration of the values that make the Gospel Ensemble such a special group,” said Adriane Thompson-Bradshaw, Ph.D., the group’s founder and leader as well as vice president for student affairs at ONU. “Many things have changed over the years, but the ensemble is built on enduring values that remain steadfast. Students have different needs now and reasons for joining the group than when it began, but the Gospel Ensemble is still a grounding place for students. The foundation is still there and is symbolic of God being faithful to us.”

The upcoming event will include the current Gospel Ensemble as well as former members of the group, area musicians and other guest performers. Also performing during the first half of the concert will be the Toledo Youth Choir, which includes singers from elementary school through college-age participants; the Philippian Missionary Baptist Church of Lima choir; and Danielle Gardner, a praise and worship leader from Louisiana, who is Thompson-Bradshaw’s cousin.

The second half of the fete will feature a mass choir of all of the musicians performing songs written by Bishop Terrence Sykes, who was Thompson-Bradshaw’s choir director during her college days at Old Dominion University and who has become a friend of the ensemble over the years.

Including former ensemble members in the landmark concert is especially appropriate, considering the impact the group has had on their lives both during and beyond their college careers.

“My most vivid memories are all the laughter and good times we spent with each other. Gospel Ensemble was a second family to me,” said Saundra (Hillman) Holmes, a 1998 ONU graduate. “From this, I learned to never underestimate the power of music because you are making an impact on someone’s life.” Holmes now works as a business banking communications coordinator with Huntington Bank in Columbus.

Fellow Gospel Ensemble alumnus Evelina Solis said, “Gospel Ensemble allowed me the opportunity to serve people from all walks of life. I loved having friends from all backgrounds. Gospel Ensemble has always been colorblind at ONU. There is nothing more beautiful than worshipping with strangers who instantly become family.” Solis currently owns an inspirational-speaking resource and life-coaching company.

Ironically, the Gospel Ensemble was originally a short-term proposition.

The 16 founding members of the group were all African-American students who assembled and rehearsed for a Martin Luther King Jr. Day performance on campus in January 1988. It then became one of the chapel outreach programs, and the group has since established itself as a mainstay on campus.

“It began with the notion of starting a group with African-American students that would give them an opportunity to express their spirituality and have a voice in a community where they often felt like strangers,” Thompson-Bradshaw said. “We wanted to find a way to come together and do something that felt familiar for the students. It was somewhat of a safe space for our students.”

The group has included a mix of ONU students, faculty and staff over the years and currently numbers about a dozen members. More than half of its members are not African-American.

“I do not know the answer to our diversity, but I find it both ironic and inspiring,” Thompson-Bradshaw said. “I think much of the answer is found in the essence of gospel music and its evolution. Over the years, gospel music has become more mainstream, and you now find white singers recording it. Also, with gospel music, it is all about the message and not whom it comes from. It comes from the soul and has an authenticity that people can relate to and connect with.”

The group’s longevity has both exceeded and confounded expectations.

“It is kind of organic how the group grew,” Thompson-Bradshaw said. “I learned that I just have to go where it takes me. This is not precisely my original vision, but I am not at all opposed to it being so multicultural. In many ways, it reflects the campus environment. For example, two years ago, one of the officers of the Black Student Union was a white male.”

The group performs 10 to 12 concerts a year, including two to three on-campus events annually.