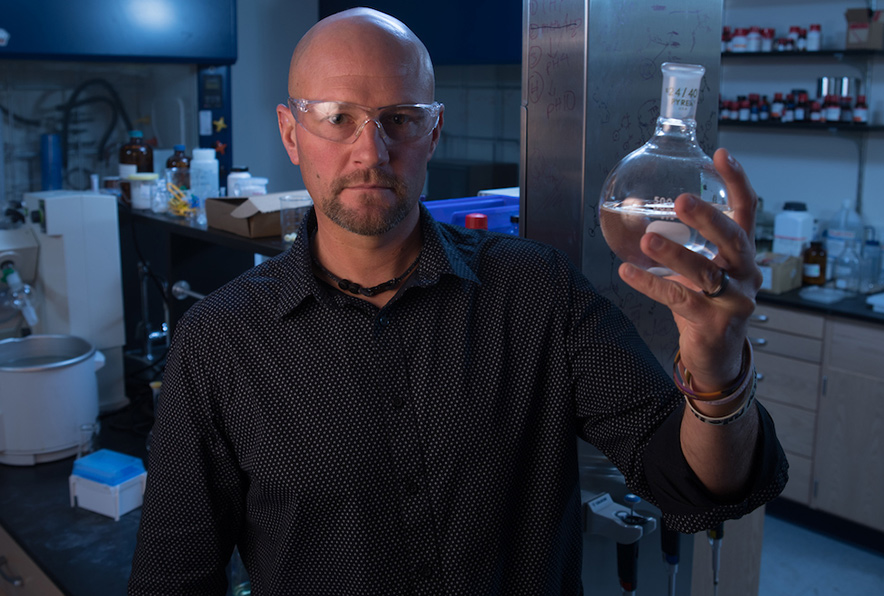 The same natural curiosity that spurred Jake Zimmerman toward a career in science has resulted in a patent for a research project that could eventually lead to a breakthrough to more easily detect dangerous amounts of lead in drinking water.

Zimmerman, associate professor of chemistry at Ohio Northern University, has long studied the ability of fluorescent compounds to serve as chemical sensors. He continued to see practical applications to his research, particularly in regards to current events.

The result was the awarding of both U.S. and international patents for his work in September, following an involved process.

“While we are still in the relatively early stages, down the road, an ideal outcome would be to develop a unit that detects unsafe levels of lead in drinking water in homes,” Zimmerman said.

It has been a circuitous process.

“When this project began, I was not necessarily looking at lead-detection,” Zimmerman said. “Rather, I was writing a grant proposal about five years ago. In carrying out some new reactions in our lab, I stumbled upon this class of compounds. As a teacher of medicinal chemistry, it is my nature to look for practical purposes of research.”

After publishing a paper in conjunction with the student researchers in his lab, Zimmerman decided to take the next step with his research.

“I began looking at applications. Fluorescent compounds have several different potential uses, or applications – two of which include imaging and as a sensor/detector,” Zimmerman explained. “I decided to focus on the sensing properties. At the time, the lead-poisoning crisis in Flint, Mich., was in the news, and much of the cause of that problem was lead-pipe corrosion.”

“Therefore, we were intrigued by the possibility of our compounds acting as fluorescent lead sensors. Ideally, we envision developing a type of device that would change color, such as blue to green, if lead levels were too high,” Zimmerman said.

Zimmerman decided to pursue a patent before submitting a National Institutes of Health (NIH) grant application. “We sought the patent to protect the science/invention prior to submission,” he explained.

The project aligns with what motivates Zimmerman in his professional pursuits.

It is especially meaningful if that “stuff” makes an impact.

“It would be rewarding to see this research result in a product that makes a difference in improving the quality of life for people,” Zimmerman said. “In many ways, this whole adventure really captures what science means to me. You keep following the process and see where it takes you.”

In addition to the practical potential, this endeavor has been valuable for ONU’s students. For example, Zimmerman has been able to mentor eight different undergraduate students in this high-level project during a three-year period.

The student researchers have gained meaningful insights from the experience.

“From this project, I have learned several useful techniques that can be used inside and outside of the labs. I have learned time management through getting all of the reactions completed that are required,” said Megan Nieszala, a senior chemistry major and physics minor from Lambertville, Mich. “This experience has prepared me for a professional future by teaching me not only lab techniques, but also how to grow intellectually as a young aspiring chemist.”

Nieszala, who graduated from St. Mary Catholic Central in Monroe, Mich., plans to pursue a doctoral degree and work in industry.

“I’ve learned how to go beyond just following the written procedures in a lab manual and to think more critically,” said Alex Stafford, a senior chemistry major from Beavercreek, Ohio, who attended Centerville High School. “It has taught me how to be more independent in the lab and the skills necessary to go the literature and draw my own meaningful conclusions rather than just waiting for the professor to enlighten us.”