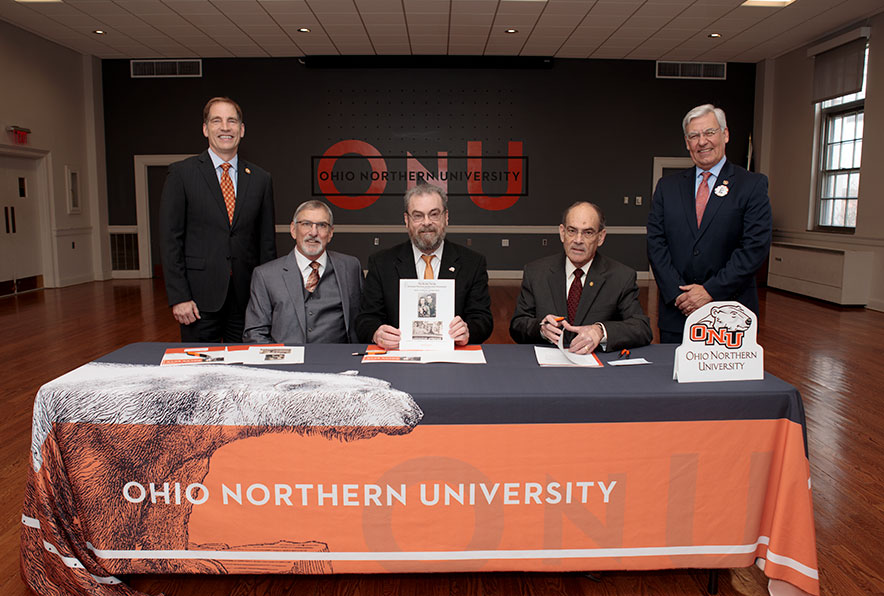 The Butler family continues its multi-generational relationship with Ohio Northern University through the establishment of a scholarship endowment. In all, 11 members of the Butler family, spanning five generations, have attended ONU.

Brothers Steve, Christopher and Mark Butler have founded the Butler Family Endowed Pharmacy and Education Scholarship at ONU. The brothers are the great-grandsons of Dora Koontz Butler and Fred Luther Butler. Proceeds from their gift will fund scholarships for ONU College of Pharmacy students from northwestern Ohio, with preference to students from Lima, Ohio. Every 10th year, the scholarship will be awarded to a student pursuing a degree in education.

The first scholarship will be awarded to a student for the 2018-19 academic year.

The Butler family’s connections to Ohio Northern are nearly as old as the University itself, which was founded in 1871. Dora Koontz Butler attended what was then Northwestern Ohio Normal School and then Ohio Normal School between 1884 and 1887, training as a teacher. She married Fred Luther Butler, who attended Ohio Normal University, completing his pharmacy training in 1892. Fred grew up on the family homestead farm near Pandora, Ohio, and operated the first drugstore in Vaughnsville, Ohio, before moving to Roundhead, Ohio, around 1900.

The family is especially tied to the ONU College of Pharmacy. Fred and his sons, Guy and Glen, all earned pharmacy degrees from ONU and then operated Butler Drugs in Lima. Guy’s son Lowell interrupted his studies at the College of Pharmacy with three years of service in the U.S. Army during World War II. He returned to ONU and completed his pharmacy education in 1948.

Mark represents the fourth generation of his family to attend Ohio Northern, graduating in 1979 from the ONU College of Pharmacy. He served as a pharmacist in the U.S. Air Force for 23 years, rising to the rank of colonel; he currently serves as the chief of pharmacy for the Dayton VA Medical Center.

The latest member of the family to pursue an Ohio Northern education is Heather Butler McCoy, who earned a bachelor’s degree in education in 1995 and has pursued a career as an educator in the Olentangy and Big Walnut school districts in Delaware, Ohio.

Appropriately, the scholarship agreement was officially signed during the University’s Founders Day event.

“We are grateful for the generous support of the Butler family in endowing this scholarship as well as their association with the University for parts of three centuries. At Ohio Northern, we emphasize the importance of relationships and fostering a family-type atmosphere on campus, and the Butler family certainly epitomizes that,” ONU President Daniel DiBiasio said. “The fact that this scholarship fund will allow future pharmacists and educators to attend ONU to pursue their academic and professional goals is a fitting tribute to the Butler family and continues their legacy at the University.”