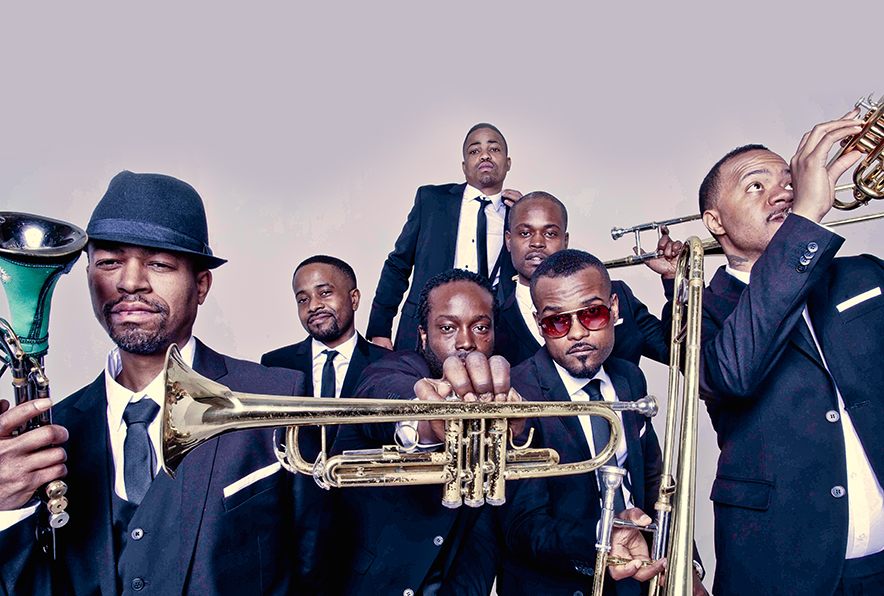 The Hypnotic Brass Ensemble is a family band consisting of seven blood brothers who began their musical training at the tender ages of four and five by their father, jazz trumpeter/band leader Kelan Phil Cohran (Earth, Wind, & Fire; Chaka Khan; Sun Ra). The boys went on to form the Phil Cohran Youth Ensemble in 1990. The family toured the United States performing the complex original written jazz compositions of Cohran and other greats such as Duke Ellington, Count Basie, and even the music of classical greats Bach and Beethoven. Although the group’s early musical training encompassed primarily elements of instrumental performance, the brothers were personally being exposed to the music of their own generation (hip hop, rock and reggae to name a few) and absorbed these components into the cosmic jazz style of their father. Hypnotic Brass Ensemble freely mixes the brass-band tradition with generous doses of hip hop, soul and funk, creating an intoxicating and boisterous blend that is just barely contained on their latest release, Fly: The Customs Prelude. They have toured throughout Europe, Asia, Australia, Africa and South America and have played with everyone from Prince and Mos Def to Mick Jones (The Clash) and Damon Albarn (Blur, Gorillaz). They’ve performed at Coachella, WOMAD AU, Jazz at Lincoln Center, The Sydney Opera House and Carnegie Hall. The documentary film Brothers Hypnotic explores their music, work ethic, life and experience of being raised by their jazz legend father. After screening in major cities and festivals, it aired on PBS. Their song “War” was featured in the blockbuster hit movie The Hunger Games.