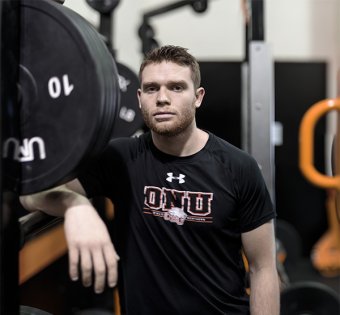 Even though exercise physiology major Corey Briggs chose Ohio Northern’s small, remote campus for his college home, it didn’t hold him back from chasing his dreams on the West Coast.

The internship came about after Briggs spent months researching esteemed football programs and networking with coaches from across the country. The opportunity was unprecedented, and the preparation Briggs received through ONU’s strength and conditioning program gave him the perfect foundation to work from.

In Oregon, Briggs learned that perfection was essential to running a nationally competitive football program. His supervising coaches had extremely high expectations for him, but they also understood that making mistakes was an important part of the learning process, too.

As an intern, he was actually filmed while he coached players, and his supervising coaches would go over this film to point out mistakes he should correct or ways he could improve. They gave him tons of constructive criticism, but they also gave him a goldmine of valuable advice.

The experience taught him that being a first-rate strength and conditioning coach is not for the faint of heart. You have to be able to handle pressure, take challenges in stride, and learn and grow from your mistakes. But in the end, the payoff is always worth it.