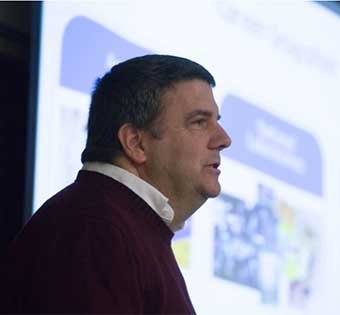 David Rakestraw is senior program manager for the Global Security directorate at Lawrence Livermore National Laboratory (LLNL) in Livermore, California. A multi-program national security laboratory, LLNL’s primary stated mission is to enhance the nation’s defense and reduce the global threat from terrorism and weapons of mass destruction. Rakestraw oversees a group working to identify and then counter emerging explosive, chemical and biological threats. Prior to LLNL, he spent 12 years at the Sandia National Laboratories location in Livermore, California, where he engaged in a wide range of research and development activities, such as developing laser-based diagnostics for studying combustion processes. Rakestraw’s experience with lasers lead him to a new area of research that used the high-sensitivity of laser-based detection to develop high-speed DNA sequencing instruments in collaboration with Beckman Instruments. Then, a few years later in 2000, using technologies his research team developed at Sandia, Rakestraw co-founded a company that specialized in applying microfluidics for chemical analysis. That company was Eksigent Technologies, which became a leader in the field of high-performance liquid chromatography used for biochemical analysis.